← Criterion Blu-ray review: Jack Garfein’s Something Wild (1961)
Seeing the world in black-and-white … and shades of grey → 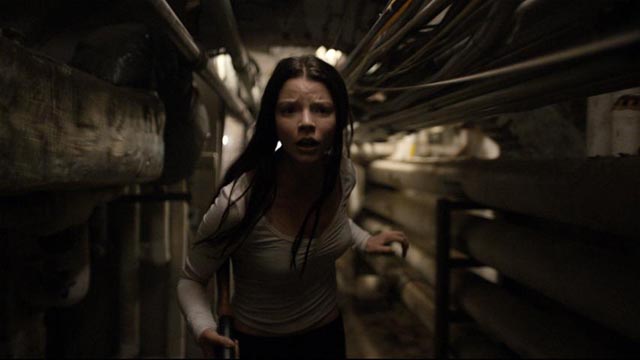 Anya Taylor-Joy as abductee Casey Cooke, trying to escape the lair of the Beast in M. Night Shyamalan’s Split (2017)

The inauguration of Donald Trump is as clear a sign of the coming Apocalypse as we have ever seen. Now, hard on its heels, comes another sign – a new M. Night Shyamalan movie, released the same day, has been greeted not with the usual overwhelming contempt, but with a largely positive response from both audiences and critics. True, as with Shyamalan’s previous feature, The Visit, some of that approval is grudging, hedged in with “better than usual”s, and “almost back to his peak” (that would be his third feature, and first success, The Sixth Sense [1999]). For years it has seemed that he could have made Citizen Kane or Star Wars and a majority would have dismissed them as crap. The general animosity directed at him has puzzled me as I’ve seen no end of lousy movies embraced by those same audiences and critics – why has Shyamalan been so despised while a soulless hack like J.J. Abrams is crowned Hollywood royalty?

It begins with a man kidnapping three girls and locking them in a basement. The girls, although panicked, immediately try to assess their situation and devise some way to escape – Shyamalan doesn’t make them helpless victims; and even though there are conflicts between them, they are all treated with respect. Their abductor is quickly revealed to be a man within whom twenty-three distinct personalities reside. The original – Kevin – has been suppressed as others vie for control, with Dennis and Patricia recently becoming dominant in order to pave the way for a new entity dubbed The Beast. The girls are intended for sacrifice to this creature.

James McAvoy as Dennis, the dominant personality, sharing Kevin’s body with 22 others

As the personalities grow increasingly unstable, some of them seek help by contacting Kevin’s therapist, Dr Karen Fletcher (Betty Buckley, Carrie’s gym-teacher Miss Collins). As the doctor senses the changes in her patient, she begins to draw Dennis out to reveal his plans for the Beast; and the girls make repeated attempts to escape, each ending up in isolation. What Dennis doesn’t realize is that the outcast of the group, Casey (Anya Taylor-Joy in another luminous performance), is also seriously damaged – like Kevin, she was an abused child, but rather than fragmenting she has developed a strength and resilience which equip her to fight back even as her abductor(s) grow stronger.

The balance Shyamalan maintains among all these characters creates more tension than usual in this type of story, and the director has done his usual excellent work with the cast; the performances are nuanced and emotionally authentic – all the girls, the doctor, and the multiple facets of Kevin (a tour de force from James McAvoy) … even the Beast when he emerges is more than a simple monster. He’s another manifestation of Kevin’s pain, a stronger attempt to contain his confusion and assert his will on the world which has damaged him.

Split is one of M. Night Shyamalan’s strongest movies … but it’s not a “return to form”. The form has been there all along. It just hasn’t been acknowledged for years.