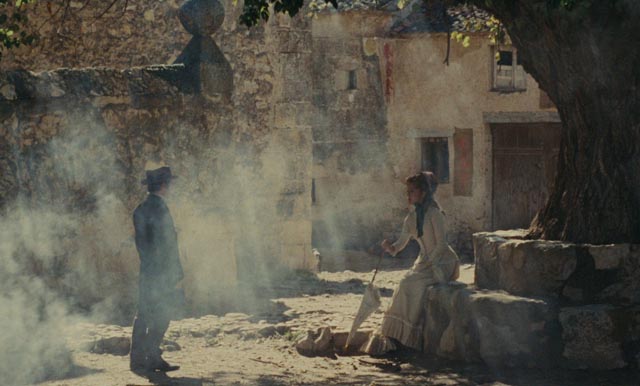 Strange as it seems, it has taken me almost fifty years to catch up with Orson Welles’ final completed dramatic feature. I’ve read about it in various places over the years, but it’s been really hard to find – a problem now solved by Criterion’s impressive Blu-ray release. 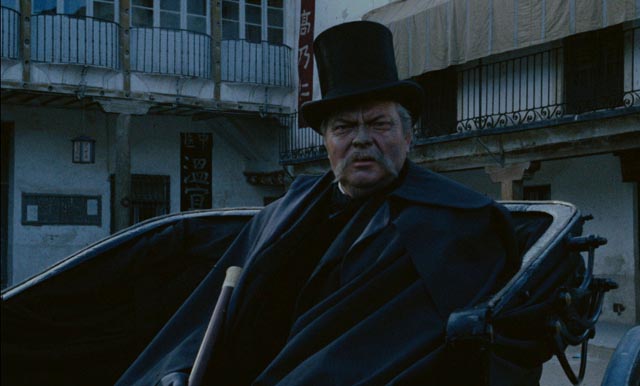 Thematically, it is almost a case study of Welles’ passion for storytelling, with tales within tales. There are only four characters, but each gets to relate a narrative about his or her life and the events which have brought them together in this particular story. Towards the end of the 19th Century, Charles Clay (Welles), a wealthy, ageing businessman in the Portuguese colony of Macao, lives a bleak and empty life in an opulent mansion, his only contact seemingly with his clerk Elishama Levinsky (Roger Coggio), who spends the evenings reading him the accounts.

One evening, tired of this, Clay asks Levinsky to read something else … but it has to be something “true” as he despises things which have never actually happened, or prophecies of things which may never happen. Their discussion of what constitutes truth spurs Clay to relate a story he heard decades ago on the ship bringing him to Macao: in some port, a wealthy man who has been unable to produce a child with his young wife pays a sailor to sleep with her to produce an heir. Levinsky points out that this is a story told on every ship, a fantasy known to all sailors. 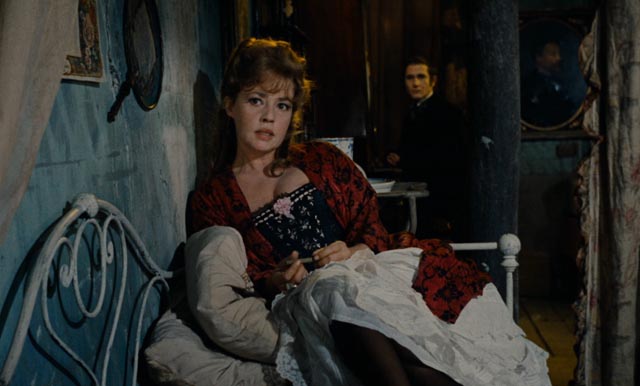 Virginie thinks over the proposition

Deeply upset, Clay determines to take control of this narrative, to “make it real” and thus end its quality as myth. He sets Levinsky the task of finding a woman to play the part of his wife, while he will himself find a sailor in the port to whom he will give five golden guineas to sleep with the woman.

Some critics have seen this as a metaphor for Welles himself as filmmaker, controlling and manipulating events and people to construct his narrative. And yet, as events unfold, this seems far too simplistic. Clay is attempting to assert his power, certainly, and yet ultimately this narrative is about impotence and failure, the role the rich man has assigned himself being that of a man unable to produce an heir and perpetuate his family and business beyond his own impending death. 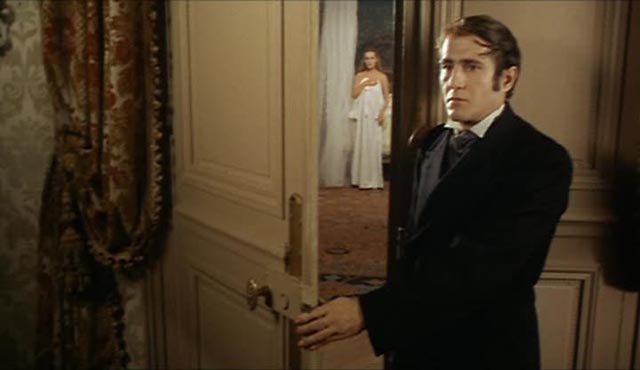 Levinsky prepares Virginie for her part in Mr. Clay’s “drama”

Levinsky approaches a prostitute with Clay’s proposition, a woman who is herself growing old in her profession. Virginie (Jeanne Moreau) reveals that she is the daughter of the business partner Clay destroyed many years before; she grew up in the house he now occupies and was reduced to poverty and prostitution when her father committed suicide over a debt Clay wouldn’t forgive. She initially rejects Levinsky’s offer of one-hundred pounds, but finally agrees to do the job for three-hundred, the amount in Clay’s dispute with her father.

The sailor Clay finds in the port is Paul (Norman Eshley), a young man just recently rescued from an island where he was shipwrecked alone for a year. 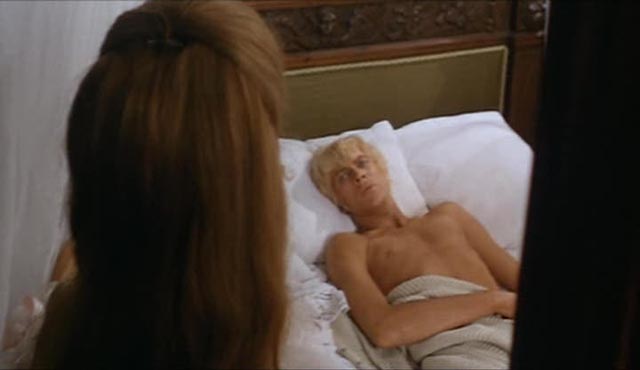 Clay demands that this pair re-enact the story, and yet they are two autonomous individuals with their own needs, desires and emotions, responding to each other in ways over which Clay has no control. In trying to kill the fantasy by making the story real, he instead only discovers his own limitations. Although he has paid them to be here, they are anything but puppets for him to manipulate.

Shot by cinematographer Willy Kurant, mostly on Spanish locations and in Welles’ own villa, The Immortal Story is lush and colourful, with a kind of tactile theatricality (perhaps most problematic in Welles’ own heavy makeup, which features one of his famous false noses and patches of shadow and colour on his face which would seem more appropriate for the stage; on the other hand, it might plausibly be argued, given the nature of the character, that the makeup deliberately evokes the idea of a corpse, with Clay essentially already being dead, merely waiting for the appropriate moment to lie down for good). Welles and Kurant use colour in the sets and costumes, and gels on the studio lights, to create a rich visual texture and sense of depth, emphasized by the use of wide-angle lenses to create distance between the characters. In his editing, Welles alternates lengthy takes with rapid montage, tableaux with dynamic hand-held movement, giving the film a dynamic rhythm which produces powerful emotional effects. 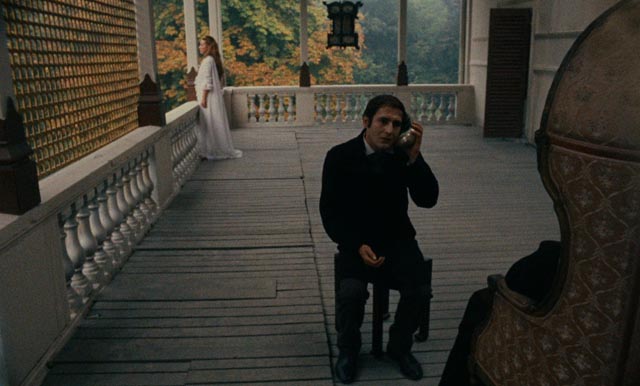 The bedroom scene between Virginie and Paul is steeped in longing, with each character’s desire serving to transform the other for this brief moment into what they want most, in the process transforming their image of themselves into something beyond the limits of their actual lives. In effect, Clay’s attempt to kill the myth by making it “real” saves these two by infusing their lives with a romantic fantasy which can sustain them in the face of hardship.

This short feature, running just under an hour, proves to be one of Welles’ most emotionally rich films, critical complaints about its theatricality and the post-dubbed dialogue quite irrelevant. A chamber piece which uses minimal means to evoke a world which straddles the border between history and fantasy, it is graced with four superb performances and displays Welles’ seemingly effortless mastery of cinematic art.[1]

Transferred in 4K from the original 35mm camera negative and a 35mm interpositive, and restored in 2K, Criterion’s Blu-ray beautifully represents Kurant’s visual style, which uses soft light and rich colours to evoke the film’s many psychological and emotional layers. The restored original mono soundtrack supports Welles’ subtle use of ambiences and music (piano pieces by Erik Satie) to add depth to the film’s visual spaces and the characters’ emotions.

The disk presents two versions of the film, the English-language one (58:00) and a slightly shorter French version (50:57), which occasionally uses different shots and pacing. In the former, we hear the voices of Welles, Moreau and Eshley, while Coggio is dubbed by Warren Mitchell; in the latter, Welles is dubbed by Philippe Noiret.

The English version has a commentary by film scholar Adrian Martin from 2009, which provides details about the production and some thematic analysis.

Willy Kurant (2004, 15:00) goes into technical detail about the means by which he worked with Welles to create the film’s visual style.

Welles scholar Francois Thomas (2016, 25:14) gives an account of the production and some of the difficulties Welles faced in completing it.

Finally, Portrait: Orson Welles (1968, 42:53) is an interesting documentary about the filmmaker which was made, by Francois Reichenbach and Frederic Rossif, to accompany the original television screening of The Immortal Story. Welles is seen on set and at various events, deflecting with humour interview questions which obviously bore him and ruminating on film history and his own place within it.

The booklet essay is by Jonathan Rosenbaum.

(1.) The style and tone of The Immortal Story were surely hugely influential on Harry Kuemel’s Malpertuis (1972); adapted from a surrealist novel by Belgian author Jean Ray, Malpertuis also features a sailor drawn into the manipulative schemes of a dying aristocrat – played by Welles. Visually lush and steeped in romantic atmosphere, it too ruminates on the nature of narrative and myth. It also had a troubled distribution history and exists in two different versions, although unlike Welles’ film, only one of these is the work of the director himself. (return)