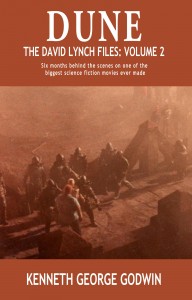 Cagey Films has just published its second eBook, volume two of The David Lynch Files. This one, of course, is devoted to the troubled production of Lynch’s science fiction epic Dune, adapted from the novel by Frank Herbert. The text includes the journal I kept during the six months I spent on the production over the summer of 1983, with a revised introduction and epilogue. I have also added a section of previously unpublished transcripts for a number of interviews that I and Anatol Pacanowski conducted during the shooting of our aborted making-of documentary – these include lengthy sessions with David Lynch and Jack Nance, plus others with some of the principal actors and several crew members. These interviews are all that remain of the work I did that summer, existing now only as aging audio tapes dubbed from the original video before the tapes were taken away from us.

The book can be ordered here.

As an additional bonus, I’ve added the script I wrote while working on Dune. Called “Cafe Universal”, it’s an absurdist thriller about a naive American artist named David Linton who, while in Paris for a show, becomes inadvertently caught up in violent events involving a variety of obscure factions he is unable to comprehend.

The script can be ordered here.

All three titles are available separately or as a bundle at a discounted price.