Monte Hellman, who earned his place in the pantheon with 1971’s Two-Lane Blacktop, the greatest of all road movies, started out like a surprising number of his contemporaries making a cheap exploitation movie for Roger Corman. His 1959 debut feature, Beast from Haunted Cave, already exhibited a tendency to push against genre constraints, with its mix of gritty noir crime movie and giant man-eating spider. After some uncredited work on Corman’s patchwork Gothic romp The Terror (1963), Hellman and partner (and fellow Corman acolyte) Jack Nicholson went to the Philippines to make a pair of ultra low budget features for Lippert Pictures.

On their return, Corman suggested that Hellman make a pair of westerns, which in 1965 might have seemed like an odd choice as that particular genre appeared to have reached a state of terminal exhaustion, particularly at the low-budget end of the spectrum. That was the year Sam Peckinpah stumbled with Major Dundee, his first attempt at a big reconfiguration of the genre; it was a year after Leone launched the spaghetti western boom with A Fistful of Dollars, which forcefully began the creation of an alternate set of myths, harsher and more cynical than the classic Hollywood version. It was also the year which saw the release of Elliot Silverstein’s Cat Ballou, a broad pastiche which trashed that classic form (and for which, sadly, the great Lee Marvin won his only Academy Award). 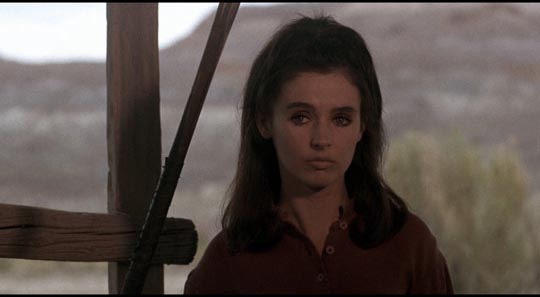 Why Corman believed a pair of cheap oaters would be a good financial bet at that time is a mystery – other than as a reflection of his own beginnings as a filmmaker, having made four westerns himself in 1955-56. But the idea appealed to Hellman, two scripts were written, and director, cast and crew headed for Kanab, Utah, where the two films were shot back to back over six weeks. Whatever Corman had expected, the results ended up being something very different from easily exploitable B-movie filler. In fact, neither film found release in the States for several years, although both were well received in France – which in itself is a bit of a giveaway. On shoestring budgets, with minimal cast and crew, Hellman had created a pair of “art films” in western drag. 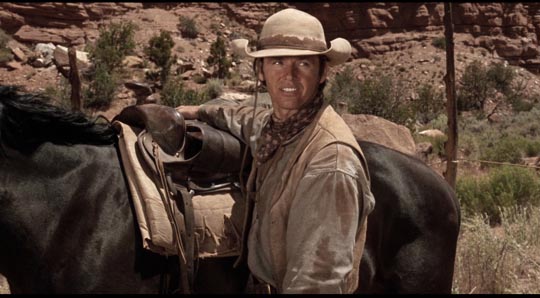 From the very first images, The Shooting makes clear that it is no ordinary movie. Through the careful use of camera, editing and sound, Hellman establishes an atmosphere of deep unease. A man, Willett Gashade (Warren Oates, in his first starring role), pauses by a river for a drink of water; he senses someone following him and deliberately leaves signs to mark his trail. When he gets back to the mining camp he shares with his brother and two other men, he’s shot at by nervous younger partner Coley (Will Hutchins), who tells a garbled story of Gashade’s brother Coigne and their other partner, Leland Drum, returning from a nearby town where they apparently drunkenly ran down, and possibly killed, a man and perhaps a child. That night Drum was shot dead by the campfire and Coigne took off on Coley’s horse. All of this information comes from the jumpy, almost incoherent babble of the terrified Coley and we are never given any more certain information as the film unfolds.

An unnamed woman (Millie Perkins) arrives in the camp and insists on hiring Gashade to lead her to a town across the desert. At first he refuses and she keeps upping the amount she’ll pay. But in the end, it’s not the money that makes him agree; he senses her obsession with getting revenge and goes along, as he says, to prevent a killing. This woman is a fierce and primal figure; she values nothing but achieving her single aim, even at the risk of causing the deaths of everyone around her. Feeling that the pack mule is slowing them down, she drives it off in the night, along with a lot of their supplies; she rides horses to death and is just as willing to discard the men traveling with her. And she regularly fires her gun, seemingly practicing (when Coley points out a beautiful blue bird, she instantly shoots it), but as Gashade soon realizes, she’s signaling to someone else who’s following their trail. Billy Spear (Jack Nicholson) is a chillingly smiling gunfighter who’s been hired to kill whoever it is Gashade has been hired to track.[1]

All of this makes the narrative sound clear and direct, but everything about The Shooting is allusive and elliptical. The characters, as much as we have access to them, are psychologically plausible, with an air of authenticity provided by the distinctive vernacular of the dialogue (the script by Carole Eastman is beautifully written). But the key here is the degree to which our access is limited. We know little about these people and less about the events which have led them to be joined on this journey across a stark, inhospitable landscape. As viewers, we are forced to fill in many blanks. The Shooting is about uncertainty and unknowability, and the ways in which we create our own narratives to give meaning to events we can only glimpse a part of. It is, in fact, an epistemological western in which are buried echoes of Greek tragedy; the woman is a fury leading men to their deaths for crimes left unspecified. And at the end, just as it seems that everything will abruptly resolve into a straight-forward conclusion, the narrative collapses mysteriously into even greater levels of uncertainty (prefiguring the final breakdown of the cinematic apparatus itself in Two-Lane Blacktop). 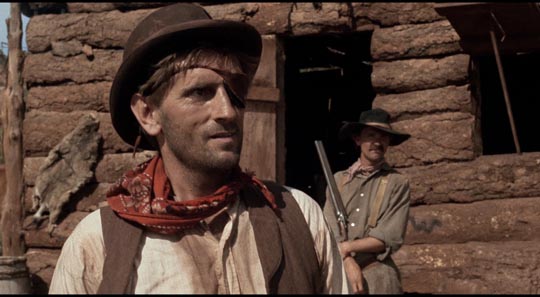 Ride In the Whirlwind, by comparison, seems much more traditional and accessible. Scripted by Jack Nicholson, who co-stars as cowhand Wes, the story is quite simple: three friends on the way to Texas stop in a canyon for the night where they receive the hospitality of what is obviously a gang of outlaws; the two groups, naturally wary of each other, have no cause for personal animosity and share a meal before turning in for the night. In the morning, the camp is surrounded by a group of vigilantes, hunting the outlaws down following a stagecoach robbery. The three friends, by their mere proximity, are automatically perceived as members of the gang and find themselves faced with summary execution. With one shot dead, Wes and his older partner Vern (Cameron Mitchell) head deeper into the mountains, barely able to stay ahead of the vigilantes, who have killed every member of the gang.

The pair find themselves at a remote settlers’ farm, where harsh, taciturn Evan (George Mitchell) lives with his wife Catherine (Katherine Squire) and daughter Abigail (Millie Perkins again). Seeking food and shelter, they take the family hostage while asserting that they’re not outlaws. When the vigilantes start closing in, however, the two men have no choice but to act out the role that’s been imposed on them, becoming murderers and horse thieves. 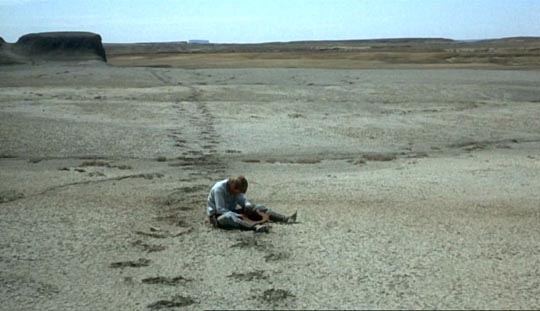 Both these films share the psychological acuity of Anthony Mann’s westerns and the laconic, stripped-down approach of Budd Boetticher’s work, but both move far away from those classical models. Their style and attitude lies closer to the French New Wave than to Hollywood, giving familiar genre elements a freshness which the mainstream had long-since lost. Hellman demands the attention of the audience, an active participation in the construction of narrative – in other words, these two films are worlds away from disposable commercial product, so it’s hardly surprising that they all but vanished for decades. Beautifully shot by Gregory Sandor, who gives that dusty, rocky landscape an ominous apocalyptic feel which is unlike either the majesty of Ford’s Monument Valley or the parched deserts of Leone; atmospherically scored by, respectively, Richard Markowitz and Robert Drasnin; and brilliantly acted by their small casts – with Nicholson and Perkins in particular delivering radically different performances in the two films – The Shooting and Ride In the Whirlwind stand as almost-forgotten high water marks of ’60s independent filmmaking. All the more remarkable then that they were made so quickly, with such limited resources.

Criterion’s Blu-ray pairing of Hellman’s two westerns, transferred in 4K from the original negatives, provides a rich image with a lot of detail (and pronounced film grain), which serves both the actors and the parched landscapes well. The original mono soundtracks are clean and clear, with subtle and sparing use of effects and music.

The disk features almost two-hours of supplements, most of them with the 85-year-old director in conversation with people involved in the productions, from Roger Corman to assistant director Gary Kurtz to actors John Hackett, B.J. Merholz, Millie Perkins and Harry Dean Stanton (superb as the outlaw leader Blind Dick in Ride In the Whirlwind). Actor Will Hutchins is interviewed by film programmer Jake Perlin, and critic Kim Morgan provides a video appreciation of Warren Oates, who went on to star in both Cockfighter (1974) and China 9, Liberty 37 (1978) for Hellman.

Hellman is joined by film historians Bill Krohn and Blake Lucas for commentaries on both features, which together with the other supplements provide a richly detailed account of the making of the two films.

Michael Atkinson, in his essay in the accompanying booklet, argues convincingly that these “visionary” films are “where the antiwestern, as a modernist commentary on and inversion of this most simplistic of all-American genres, was truly born.”

(1.) It’s interesting to note the parallels between The Shooting and True Grit (Charles Portis’ novel was published three years after Hellman shot his film); the woman is like a demonic double for Mattie Ross, with the feisty determination of the child becoming a monstrously dangerous obsession in the woman. (return)

3 thoughts on “Rewriting the West:Monte Hellman’s The Shooting and Ride In the Whirlwind”

Byron Haskin’s The War of the Worlds (1953):
Criterion Blu-ray review