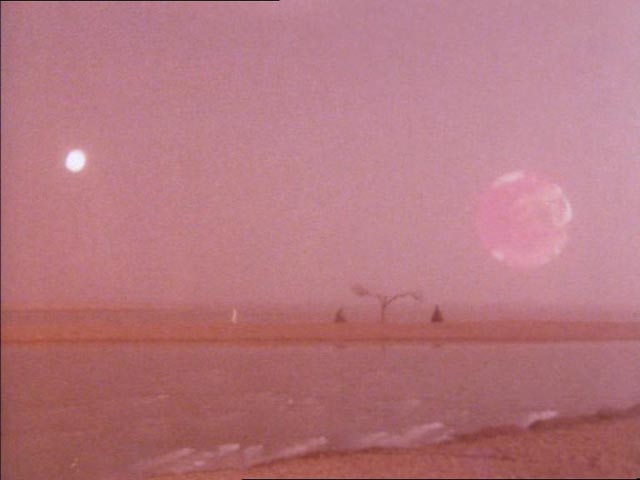 Dimension of gods and monsters: the other world of Artemis 81

Horror is a very flexible genre, open to both the exploration of ideas and the exploitation of socially disreputable imagery. Sometimes the ideas are used to prop up that exploitation, and sometimes the exploitation elements are used to slip transgressive ideas into unsuspecting viewers’ minds. Watching two British movies recently provided an interesting glimpse of the range available to filmmakers within the genre: Pete Walker’s 1974 shock masterpiece Frightmare, and a BBC production from 1981 called Artemis 81. The first I revisited via the new Blu-ray from Kino Lorber/Redemption, the second via a 2011 DVD-r copy of a 2007 BBC/2entertain edition. 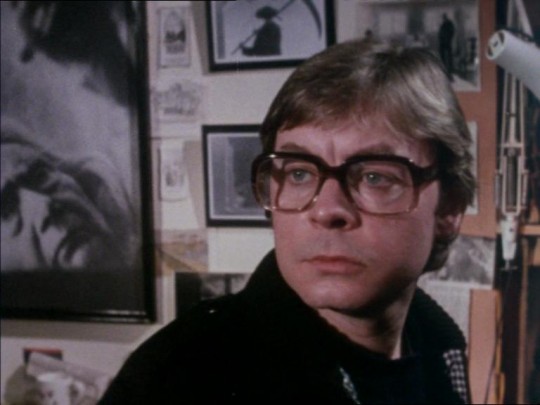 The BBC has a history of backing innovative genre projects – often with barely sufficient funds: Nigel Kneale’s Quatermass trilogy in the ’50s, Terry Nation’s post-apocalyptic Survivors in the ’70s, not to mention endless decades of Doctor Who. Given its reputation for being an often stodgy, top-heavy bureaucracy, it sometimes seems strangely incongruous what has emerged from the public broadcaster. (Mark Gatiss’ An Adventure in Space and Time provides an affectionate look at the origins of Doctor Who and just how some of these anomalies came about.) A strain of horror, fantasy and science fiction has run through the BBC almost since its birth, but few productions are as odd and surprising as Artemis 81, written by David Rudkin and directed by Alastair Reid. I honestly don’t know whether this should be classified as science fiction or horror or mythic fantasy … it has roots in many genres, not to mention ancient mythology (although after watching it twice and listening to the DVD commentary track I’m really no wiser about the title as there doesn’t seem to be a character relating to the goddess of the hunt). There is, however, a connection to the Bible in the figure of Magog who is awakened at the beginning of the film and who is connected through Ezekiel and Revelations to the unleashing of the End Times. In Rudkin’s story, apocalyptic conflict is initiated when Magog’s son Helith (Sting, following his supporting roles in Radio On and Quadrophenia) fails to prevent her other son Asrael (Roland Curram) from awakening her from eternal sleep. 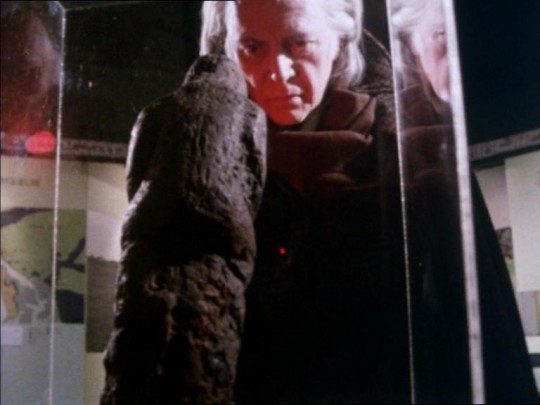 Artemis 81 is packed with literary, art, music and historical references (some more obvious than others) and points to the strong connection British television has always had with literature and the theatre. In fact, the protagonist is a writer, Gideon Harlax (Hywel Bennett), who has an interest in occult mysteries and conspiracies, but doesn’t really connect with the world on an emotional level (which causes problems in his relationship with musician Gwen [Dinah Stabb]). In the commentary, Rudkin mentions that the character contained a great deal of himself, but I couldn’t help thinking of the late Colin Wilson to whom Bennett as Harlax occasionally bears a resemblance. Harlax is drawn into the great conflict between darkness and light, good and evil, because by coincidence Gwen happened to be on a ferry crossing from Denmark to England, on which she encountered renowned organist Albrecht von Drachenfels (Dan O’Herlihy), who, having become fascinated with a small figurine of Magog in a Danish museum, has fallen under the influence of Asrael. 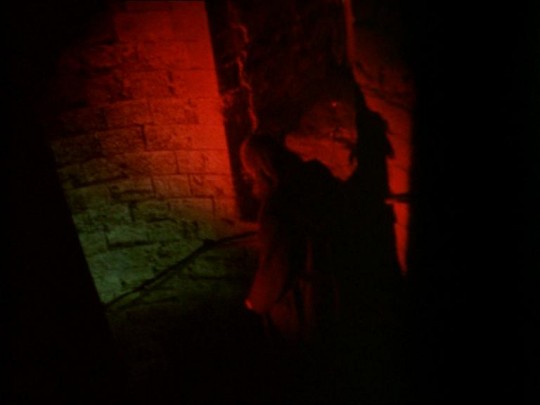 As Asrael spreads darkness and despair (a series of inexplicable suicides among the other passengers on that ferry), Harlax is forced to begin engaging with the world, his awakening putting him in increasing danger which, at the halfway point, sees his main possessions blown up and himself injured and afflicted with amnesia, from which Helith helps him to recover in what seems to be some apocalyptic parallel world. When he finally finds his way back to the here and now, it’s up to him and Gwen to stop Asrael’s ultimate plan to destroy everything through the music of von Drachensfeld, which requires an act of willing self-sacrifice. 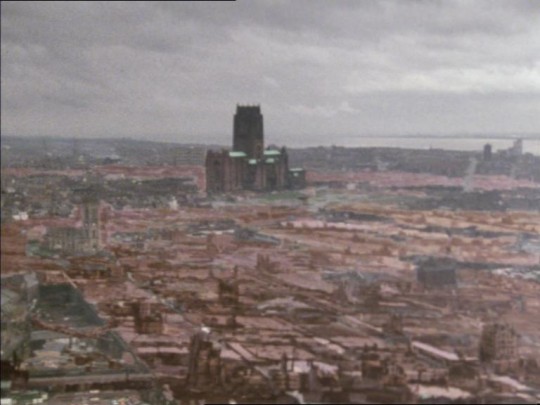 Artemis 81 toys continuously with the risk of slipping into pretension (much of the dialogue has an oddly stilted air), but manages to sustain interest through the quality of its performances and the assurance of Alastair Reid’s direction. It’s interesting, listening to the commentary track featuring Reid and Rudkin (best known for the legendary Penda’s Fen[1] [1974, directed by Alan Clarke]), to hear how many of the strange elements of the script grew out of practical considerations. Initially, the film was to be a British-Danish co-production, hence the Danish elements in the narrative; the choice of organ music as a key motif derived from a couple of important Danish composers who specialized in the instrument; the apocalyptic city was influenced by the availability of some impressive locations … and so on.

The script was initially written to allow for three one-hour programs, or two ninety-minute episodes, but the film was eventually aired as a single three-hour drama between Christmas and New Year’s 1981 (a time guaranteed to stretch viewers’ patience and produce more perplexity than entertainment). Shot on film rather than video tape, Artemis 81 creates a strange mood through its slowly accumulating narrative details, vague mysteries, dips into pretension, and haunting performances. Striving for the cinematic seriousness of Bergman and Tarkovsky and the like, it manages to go quite a way on a minuscule television budget. 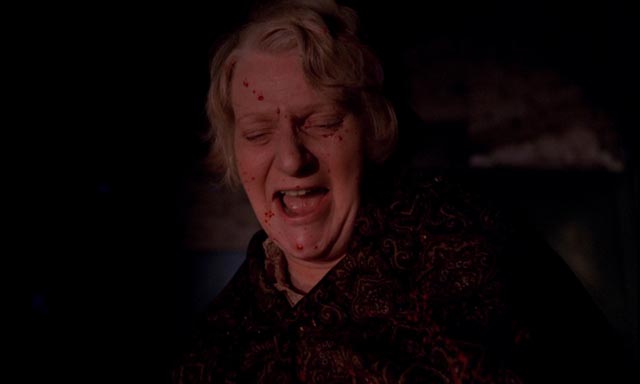 Pete Walker had none of David Rudkin’s legitimate credentials, and from the late ’60s through the ’70s he was never accorded critical respect. Unabashedly commercial in intention, he worked on the underside of what at that time remained of the British film industry; from 1968 to 1972, he made seven features, alternating soft-core porn with thrillers, before finding his real strengths with The Flesh and Blood Show, in which a group of actors rehearsing a play in a creepy theatre are killed off one by one – making it, along with Bob Clark’s Black Christmas of the same year, one of the seminal precursors of the body-count horror movie a few years before the genre exploded in the wake of John Carpenter’s Halloween. Following that, with only a couple of exceptions, Walker concentrated on horror. 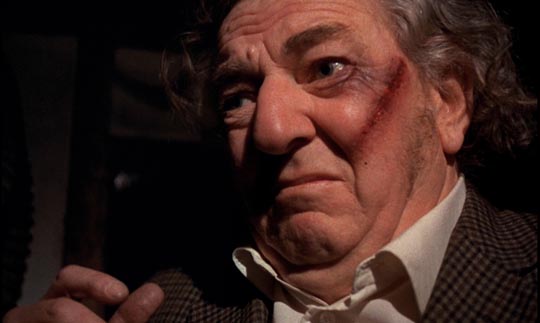 Rupert Davies as the abused but loving husband

But the films which followed (the most significant of which were all scripted by David McGillivray) switched from the somewhat mechanical body-count approach to tackle horrors rooted in the derangement of social institutions. In fact, much of the negative criticism heaped on Walker throughout the ’70s was not directed at his “tastelessness” so much as at the affront he was giving to self-satisfied British society. House of Whipcord (1974) poked a finger in the eye of national notions of law and order and the formalized structures which supposedly maintained them; a private prison run by a sadistic matron (Sheila Keith) becomes a trap for young women whose lack of decorum causes the matron distress. Their only “crime” is being independent and sexually active. The girls are dragged by the grimly moralistic Mrs Wakehurst (Barbara Markham) before a senile old magistrate (Patrick Barr) who passes sentence on them, with no prospect of ever being released. Here Walker really nailed the mix of horror, sex, violence and darkly satirical comedy which marks his best work. Two years later, in House of Mortal Sin (aka The Confessional), he applied the same approach to the church and the deeply rooted hypocrisy of self-appointed moral guardians. 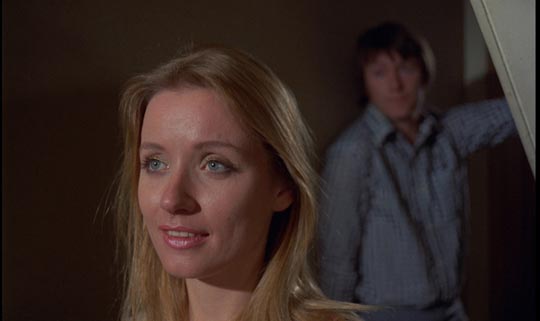 Deborah Fairfax as the dutiful daughter

But in between he made his best film, Frightmare (1974), just released on Blu-ray by Kino/Redemption. In this occasionally bloody film, Walker and McGillivray take a gleefully black look at family, the love between a husband and wife, between a mother and child, and find that no matter how nightmarish these close bonds become they’re far stronger than the relationships formed so casually between liberated young urban men and women. The story revolves around the Yates family – mother Dorothy (Sheila Keith, a favourite of Walker’s who gives a career-best performance here, a potent blend of vulnerability and madness and surprising charm), dad Edmund (Rupert Davies), and daughters Jackie (Deborah Fairfax) and Debbie (Kim Butcher). The dark secret doesn’t take long to be revealed: mom has a cannibalistic compulsion which landed her and dad in a psychiatric prison for fifteen years. Recently released as “cured” the pair have retired to the country, while Jackie devises a way to hopefully control mom’s urges by pretending to kill people in order to deliver their brains to mom. But both mom and dad know they’re just calves’ brains bought from the butcher, and unfortunately they don’t quell mom’s cravings. 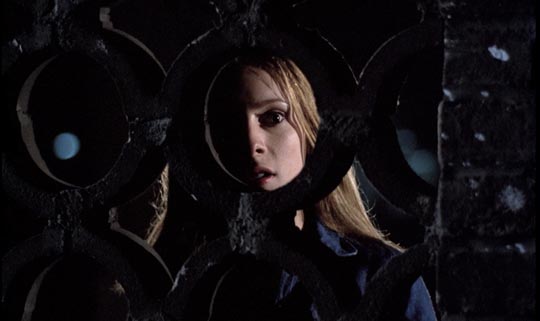 Poor Jackie is not only trying to keep a lid on mom’s uncured madness; she’s dealing with Debbie’s increasingly dangerous and rebellious behaviour while starting a relationship herself with psychologist Graham (Paul Greenwood), whose well-intentioned attempts to solve the family mystery lead to the complete unraveling of the already unstable situation. Jackie really doesn’t stand a chance against the enabling love of dad and Debbie for mom. 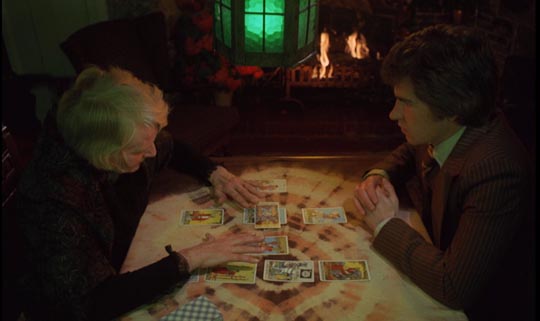 While working towards deliberately commercial ends, Walker fills the movie with well-constructed scenes (the film hits its high point in a terrific scene in which Graham visits mom for a Tarot reading, pretending to be someone seeking her psychic help; she uses the cards to cut through his deception and disconcertingly reveals that she can see exactly who he is and why he’s there), and while the performances of Fairfax, Butcher and Greenwood are adequate, old pros Keith and Davies evoke a genuine sense of the pain caused by madness disrupting a long and deeply held love. 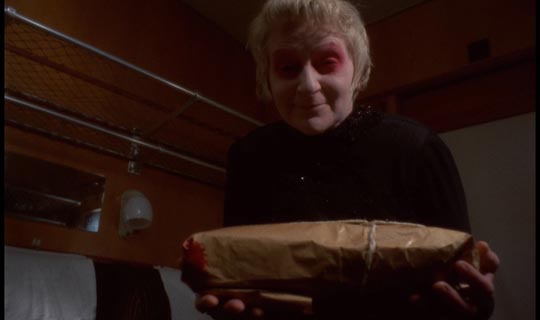 The Blu-ray packaging proudly displays two quotes from critics at the time of the film’s original release: “If you like this, have your brain examined” (Daily Express) and “Nasty, foolish and morally repellant” (The Times). Of course, things have changed a lot since the ’70s and one of the great appeals of older exploitation movies for audiences now is the amusement we feel about what once was considered so offensive (after all, we’ve seen far worse in the years since). But Walker’s best work offers more than a retro appreciation of bad movies. He worked with a high level of craft and both a strong awareness of the transgressive nature of what he was putting on the screen and a genuine satirical view of the society he was aiming to offend.

While Artemis 81 takes the cultural high ground, in essence it’s a writer’s game of references and intricate narrative construction. Frightmare on the other hand, although gleefully exploitative, digs into the self-protective certainties of a moribund culture and engages the viewer on a deeper emotional level. Sometimes the “trash” has more pertinent things to say than the quality drama.

(1.) Artemis 81 expands on many of the themes and narrative elements of Penda’s Fen: the Manichaean conflict between light and dark underlying everyday life; the psychological stresses of sexual uncertainty; even the use of organ music as a way of opening a rift between this world and another. Penda’s Fen is now available on Blu-ray from the BFI.