The Pathology of Power:
Elio Petri’s Investigation of a Citizen Above Suspicion

In an unnamed city (played by Rome) an unnamed man (played by Gian Maria Volonte) pays a visit to his mistress. She greets him by asking “How will you kill me today?” and he replies “I’ll cut your throat.” Obviously turned on, the woman enthusiastically heads for the bed where, in the middle of some energetic sex, she suddenly collapses and the man slides out of bed with blood spattered over his chest and throat. Instead of carefully cleaning up the crime scene, the man sets about deliberately leaving an array of very obvious evidence – fingerprints, bloody footprints, a carefully placed thread from his silk tie under her fingernail. Then he heads for work.

We quickly discover that he is the chief of the city’s homicide squad, just promoted to head of the political police. An effusive personality, he greets his fellow policemen with humour and energy – and perhaps a touch of underlying contempt. As the investigation into the woman’s murder proceeds, he continually interferes, abuses his former homicide squad underlings, and messes with the evidence.

Elio Petri’s Investigation of a Citizen Above Suspicion (1970), receiving a long overdue home video release in a dual-format Blu-ray and DVD edition from Criterion, is one of the most incisive dissections of the pathology of power ever put on film and it was hugely controversial when released in Italy during a particularly volatile period following the social upheavals of the ’60s. Even as the film (written by Petri and Ugo Pirro) was in production, the filmmakers were concerned about repercussions from the authorities and anticipated problems with the censors. But in such turbulent times, sometimes even the forces of “order” lack sufficient power to assert their wishes and faced with the enormous popularity of the film in its initial run – and praise and awards from abroad – the censors allowed it to be shown despite the urging of various authorities to suppress it for defaming the police.

Petri was a dedicated left-wing activist (and member of the Italian communist party) whose career appears to be fascinating for the range and variety he managed to pack into just eleven features – but this is hard to judge because his work has remained very difficult to see outside of Italy. Not surprisingly, his most accessible feature in North America has always been his satirical science fiction movie The 10th Victim (1965), which starred Marcello Mastroianni and Ursula Andress in an adaptation of a short story by Robert Sheckley (a terrific writer of comedic and perceptively prescient novels and stories); Petri’s film takes what was originally a dark tale and dresses it in eye-popping pop-art design and colour, transforming it into a playful comedy in which gender conflict becomes literally deadly.

To anyone who only knows him from The 10th Victim, Investigation will come as a revelation. The surfaces of the two films share many things in common – the bright colours, the fascination with decor and architecture as a reflection of social and psychological states, a deceptive stylistic playfulness – but the earlier film seems like a mere trifle compared to this ferocious political thriller. Anchored by a remarkable performance from Volonte (familiar to North Americans for his roles in Leone’s A Fistful of Dollars and For a Few Dollars More, as well as other spaghetti westerns), Petri’s visual style perfectly embodies the restless, paranoid, increasingly disturbed mind of the protagonist. Much of the film is handheld, the camera pushing in close to the characters, objects blocking our view and creating a constant sense of unease and uncertainty.

As the investigation continues, the story flashes back to the relationship between the Chief and his mistress, a relationship which derives its erotic energy from the reenactment of murders he’s investigated. Her fascination with these crimes pushes him deeper into a psychological state in which he’s defined by his relationship to crime and violence; but her demands on him also increase and as she assumes a more dominant role (paradoxically rooted in her pleasure in playing the victim), his sense of himself is called into question – eventually she berates him for weakness, even sexual impotence, an intolerable accusation which triggers his crime.

The Chief kills in order to prove his superiority and strength, yet the act finally exposes his weakness and inadequacy … but by the time he’s begging to be punished (as confirmation of his “superior” action), he discovers that he’s small and insignificant within the structures of power – those around and above him refuse him punishment because it would expose their own arrogance and weakness, so he’s finally defeated in the moment he gets full confirmation of what he set out in the first place to prove.

It’s interesting to compare Petri’s film to American paranoid thrillers from roughly the same period – films like The Parallax View (1974), Three Days of the Condor (1975), All the President’s Men (1976), Capricorn One (1977). They all offer an outsider hero confronting government/establishment evil … lone figures who are sometimes defeated, more usually triumphant, reasserting the stability of normal society against the usurped power of a corrupt elite. But Petri doesn’t offer that kind of comfort. Investigation of a Citizen Above Suspicion operates inside the corrupt power and uncomfortably offers us its boldest representative for audience identification: as the Chief sinks deeper into his madness, we have to recognize that it’s the system itself that has deformed him … fascism molds his sickness and insecurity, his fear and inadequacy, into a formidable weapon of social control.

Criterion offers a gorgeous, vibrant 4K transfer from the original camera negative and a strong audio restoration which highlights Ennio Morricone’s eccentric but indispensable score. The set includes both Blu-ray and DVD copies of the film and all extras. 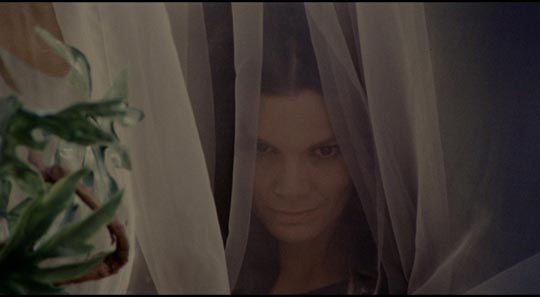 The people at Criterion seem to be outdoing themselves lately with the richness of their releases. Investigation of a Citizen Above Suspicion comes with almost three-and-a-half hours of supplements, especially appreciated because Petri is so little known here. There’s a brief excerpt from the French TV show Le journal du cinema (14:32) from 1970 in which Petri is interviewed about the political impact of the film; On Investigation (24:33), an interview with Italian film scholar Camilla Zamboni, which also deals with the political context of the film; Elio Petri: Notes About a Filmmaker (1:19:51), a feature-length documentary survey of the director’s career, which covers Investigation extensively, but also offers tantalizing glimpses of his other films, which remain unavailable here (time for an Eclipse box set perhaps?); Investigation of a Citizen Named Volonte (54:46) on the career of the film’s star, who like Petri was highly political; Music In His Blood (19:20), a fascinating interview with composer Ennio Morricone about his unconventional approach to the film’s score; and Italian and U.S. trailers (6:11).

Everyday magic: Goro Miyazaki’s From Up On Poppy Hill