The Lure of Paradise

If I had watched Ulrich Seidl’s Paradise trilogy a few weeks earlier, these three films would have made it into my year-end post as one of 2013’s highlights. I first encountered Seidl’s work (the documentary Animal Love and drama Dog Days) around the same time I came across Michael Haneke (The Piano Teacher and Time of the Wolf). Both directors have a pretty bleak view of life, but I found myself drawn to Seidl because, unlike Haneke, he actually seems to care about the characters in his films. The Austrian can find humour in the failings of people where the German stands back and watches with a cold detachment which often seems inhuman. And while both directors have a rigorous, formal style, I find that Seidl’s serves to create a space where the characters can grow and the viewer can engage with them on an emotional level, while Haneke’s tends to pin his characters down like specimens in an entomologist’s display. 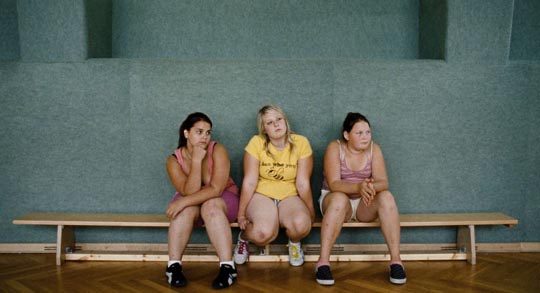 The Paradise trilogy, like all Seidl’s work, was created with improvisation, beginning from a collection of scenes without dialogue co-written with his wife, Veronika Franz, and growing in the shooting as narrative and character emerged from his interactions with his cast. He had originally conceived the project as a single, multi-story piece but found in the editing that the separate narratives interfered with each other, and so ended up making three films which intersect at several points, illustrating different aspects of his themes of fear and desire, of physical, emotional and spiritual love. In Paradise: Love, the focus is on Teresa (Margarete Tiesel), an overweight, middle-aged Austrian woman taking a vacation in Kenya. In Paradise: Faith, Teresa’s sister Anna Maria (Maria Hofstatter) spends her vacation proselytizing for the Church among godless Austrians and immigrants in Vienna. And Paradise: Hope focuses on Teresa’s adolescent daughter Melanie (Melanie Lenz) who has been sent to a “fat camp” for kids where discipline and regimentation are supposed to instill healthier attitudes towards food and exercise. 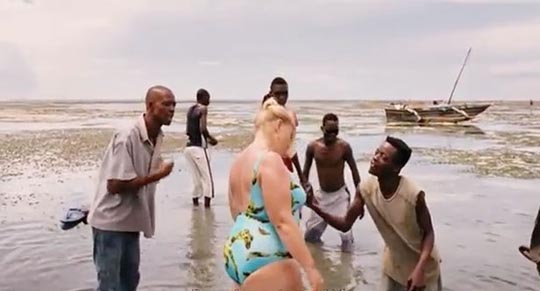 After dropping Melanie off at Anna Maria’s house, Teresa travels to a coastal resort in Kenya where she quickly makes friends with another Austrian woman who initiates her into the delights of being a “sugar mama”, a white tourist who spends time and money on young local black men who seem more than happy to provide sexual adventures. The film follows Teresa’s progress as, shy and self-conscious about her age and looks, she nervously connects with a series of men. Her first encounter ends badly as she’s repulsed by the man’s groping, the purely physical nature of the moment. As she later tells her small group of women acquaintances, she longs for someone who will see “her”, not simply her body; in short, she wants to find romance. And one day while walking on the beach, surrounded by insistent souvenir sellers (and potential sex partners), she meets Munga (Peter Kazungu), a handsome young man who gets rid of all the others and then stands off at a distance, allowing her her privacy. His apparent sensitivity draws her to him and they begin a kind of courtship in which his attentiveness seems to provide the romance she’s looking for.

But it doesn’t take long for issues of money to intrude on her idyll; he asks her for cash for his sister, whose child is in hospital with bills to pay; then it’s his father who needs help … When Teresa discovers that the sister is actually Munga’s wife, the reality of the financial nature of their relationship shatters the fragile illusion she’s been clinging to. On her birthday, her friends “buy” her another young man and the four women play with him in her hotel room until they kick him out for being unsatisfactory; she finally brings the young desk clerk to her room, but his shyness and inability to engage with her sexually comes as a rebuke of the crass sex tourist state she’s been reduced to. 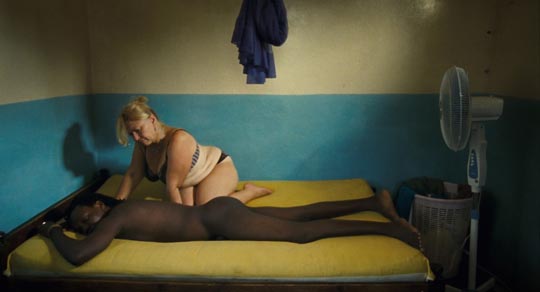 The film maintains a careful balance between its sympathies for Teresa and for the men she encounters. Each of these characters is caught in the same complex system in which desire and emotion are subsumed to commercial transaction and the long shadow of European colonialism hangs over them all; the Kenyan men offer themselves as exotic playthings for these middle-aged white women, who in turn get to act out an erotic fantasy of colonial power. But for Teresa, who genuinely wants romance and some confirmation that she is desirable, the economic realities of the situation leave her lost, empty and dissatisfied, transformed in that final encounter with the desk clerk into the ugly face of colonial racism which expects and demands submission. 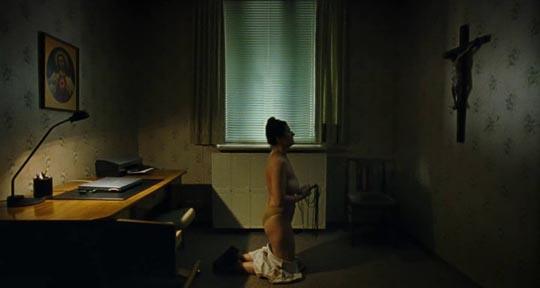 Anna Maria, Teresa’s sister, works at a hospital in the radiology unit. After a busy day of mammograms and brain scans, she says goodbye to the doctor, who asks where she’s going on her holiday. Just staying home, she says. But every day, she leaves her spartan house with its array of crucifixes and religious icons and takes the train into Vienna where she goes from door to door with a two-foot stature of the Virgin Mary. She forcefully inserts herself into people’s apartments where she urges them to pray with her, sprinkling holy water and bestowing the Virgin’s blessings; some people go along with her, while others argue about the validity of her beliefs. Some evenings, a group gathers at her house to pray together that Austria will be “brought back to the Church”.

Like a Medieval ascetic, Anna Maria fights against the insistence of her own middle-aged body; she kneels before a large crucifix and scourges her back with a whip; she crawls on her knees around the house saying the rosary over and over until her knees are raw. And then she goes back into the city to bring the Word to more people whom she believes have lost their way. 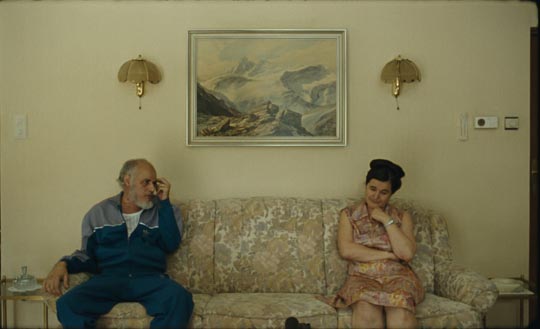 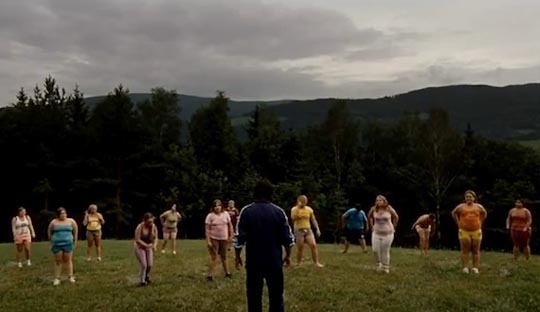 With her mother off in Kenya, Melanie is driven by her aunt Anna Maria to a bleak-looking institution in the countryside where she’s to undergo a weight-loss regime with a group of other children. The handful of adults running the program offer little in the way of empathy – this is boot camp and the idea is to break the kids down, to enforce uniformity of behaviour and what the instructors refer to as “discipline”. The idea behind the program is that the kids are overweight because they’re weak. Not surprisingly, the kids aren’t thrilled about being there. The shared ordeal creates bonds in the dorm rooms and Melanie shares her feelings with a girl named Verena (Verena Lehbauer), who seems to be more experienced – unlike Melanie, Verena claims she’s no longer a virgin. 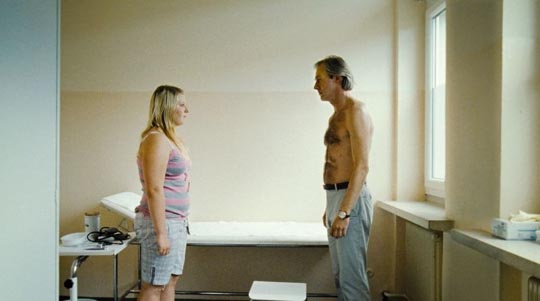 In between exercise sessions, the girls talk about sex and romance, a mixture of fear and desire, their simultaneous disgust with slobbering boys and curiosity about erotic experience. Melanie develops a crush on the doctor who runs the program (Joseph Lorenz), finding excuses to visit his office every day with minor, made-up complaints so that he’ll examine her. The doctor responds with amusement, obviously flattered by the attention, obliging her with examinations which justify lingering physical contact; and Melanie’s crush turns into painful first love, leading closer and closer to a dangerous intimacy. By the time the doctor realizes it’s gone too far, she’s so emotionally attached to him that his brusque rejection has a shattering emotional impact. 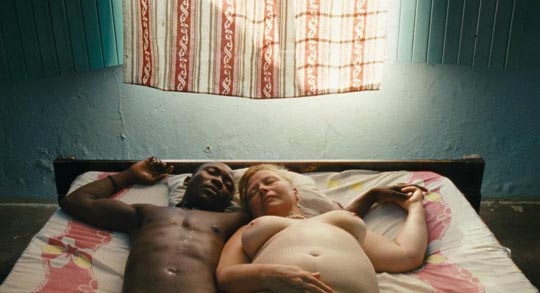 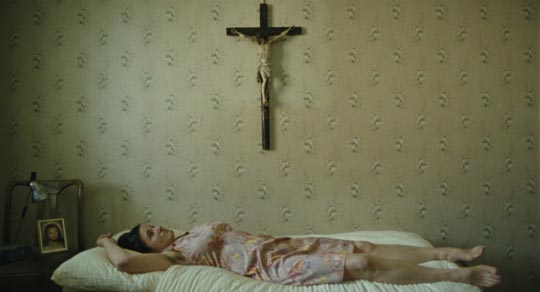 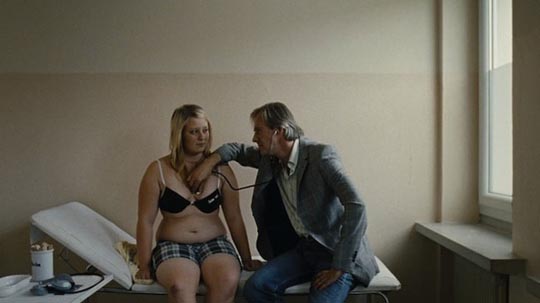 All three films in the trilogy explore the complex mix of emotions and social negotiations which surround sexual desire and erotic experience. The films are often uncomfortable for what they expose of the protagonists’ raw, bruised emotions, but the considerable tension which develops in each of the three central experiences is contained and intensified by Seidl’s very precise style. Visually, he favours a static camera facing his subjects dead on in an almost two-dimensional graphic space which is very spare and often brightly coloured. The characters have to move in and out of these tableau-like frames, or stay confined within them. When Seidl does move the camera, going hand held, it produces a sense of instability, a lack of personal control, which shifts the characters out of their self-imposed limits. So while the films evoke a dark view of experience, they also offer the possibility of movement, of change. This mixture of darkness and light, visual beauty and emotional pain, combined with the remarkable work of his actors, makes Seidl’s films highly distinctive. The Paradise trilogy offers aesthetic pleasure and psychological insight, and with their blend of humour and discomfort they stand as three of the most enjoyable and resonant films of the year.