I’m not sure how I missed the news back in December, but Gerry Anderson died on the day after Christmas. Although he eventually did several live action series and one live action theatrical feature, Anderson was inextricably associated with the string of television fantasy projects he produced using puppets and elaborate miniature effects throughout the ’60s.

My first memories of Anderson and what came to be known as Supermarionation was Four Feather Falls, a western series featuring Sheriff Tex Tucker, his talking horse Dusty, and the four feathers tucked into his hatband. Given to him by an Indian chief, they endowed him with magical powers. I would have been five when the show first aired on British TV and I probably saw the entire 39 episode run. 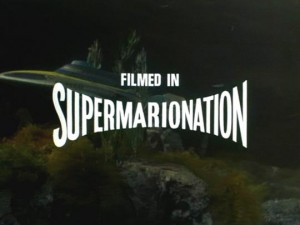 Anderson quickly left the past and magic behind in favour of the possibilities of futuristic technologies. Four Feather Falls was followed in quick succession by Supercar in 1961-62 (it could fly, dive under the sea, even drive on land); Fireball XL-5 in ’62-63 (a spaceship which used a long horizontal track to launch, reminiscent of the Ark in George Pal’s When Worlds Collide); in ’64-65, now co-producing with his wife Sylvia, he released Stingray (a super submarine); and finally, in 1965-66, his crowning achievement, Thunderbirds.

The adventures of International Rescue, a family organization based on a Pacific island, were expanded to an hour, the better to linger fetishistically over the elaborate hardware and Derek Meddings’ sophisticated miniature effects. Every episode reiterated the launch procedures of the various craft and we kids ate it up. Our favourite, of course, was Thunderbird 2 with its interchangeable pods containing a vast array of machines to tackle whatever disaster or crisis was facing the world during any particular week.

Returning to the half-hour format in 1967-68, Anderson produced his most sophisticated series yet, Captain Scarlet and the Mysterons, in which an organization called Spectrum defends the Earth against an alien race called, not surprisingly, the Mysterons, who have the ability to duplicate anything and anyone in their attempts to destroy us. The thing is, the whole war is based on a misunderstanding which resulted in the inadvertent destruction of a Mysteron base on Mars. War here is a matter of mistakes with dire consequences.

It was after the run of Captain Scarlet that Anderson produced the feature Doppelganger, or Journey to the Far Side of the Sun (directed by Robert Parrish). Rather slow moving, with Derek Meddings’ recognizable effects and miniatures, it tells the story of an astronaut (The Invaders‘ Roy Thinnes) who flies to a mirror Earth held in perfect balance on the opposite side of the sun and therefore invisible from here. It’s a well-intentioned attempt to create a mature piece of science fiction which is worth a look although it’s not particularly exciting.

Returning to television, Anderson produced his best live action series from 1969 to ’73. In UFO, once again Earth is threatened by aliens and the forces of SHADO (Supreme Headquarters Alien Defence Organization) diligently protect us from almost certain doom. The effects and miniatures still bear the mark of Supermarionation, but the design and execution are more sophisticated and the scripts generally offer a decent balance between the sci-fi action and character stories.

Anderson went even bigger in 1976-77 with his most ambitious series, Space: 1999. Unfortunately, this depiction of the Moon torn from its orbit and spinning off around the galaxy was often risible in its silly, repetitive alien-of-the-week stories. An attempt to create a Star Trek-like concept falls flat.

Although he continued to produce through the ’70s and ’80s (an attempt at an Avengers-like crime show called The Protectors; more puppets with Joe 90, The Secret Service and Terrahawks), Gerry Anderson’s creative heyday was over. But that decade-spanning string of successes in the ’60s represent a unique career in popular culture and, for those of us who saw those puppet shows when they were first broadcast, his work remains an important part of our imaginative experience.