I’ve recently been reading – or re-reading – most of H.P. Lovecraft’s longer stories since I bought the collected works for my Kindle. There are things about Lovecraft that I really like – his sheltered, bookish protagonists poking through old dark buildings in search of musty documents which may reveal the awful truth about our precarious place in the cosmos – but there’s no denying that reading him sometimes takes a Herculean effort and leaves me feeling exhausted.

Lovecraft was not a storyteller. That isn’t a failing; he had no ambitions to be one. He was obsessed with trying to convey a sense of “cosmic horror”, to get across the idea that humanity is a mere transitory blip in a universe which predates us by billions of years and will carry on for billions more long after we’ve vanished. He wanted to hammer home our terrible insignificance, and so his stories consist of reams of exposition and dense description, almost entirely devoid of action.

Typically, there’s no sense of mystery or suspense in a Lovecraft story. Although his characters claim not to believe what they’re experiencing, there’s no doubt that the author does; the reader is always way ahead of the protagonist, and fairly often it becomes irritating when – as in, say, The Shadow Out of Time – the narrator goes on and on in minute detail about his experience, all the while claiming that it was probably just a dream rooted in some folktale he’d once heard. By the time the character has to admit that, yes, it is all real (and more often than not goes mad as a result), the reader is well past the point of impatience. And yet, there’s a certain imaginative satisfaction in the monumental effort HPL has exerted in giving a sense of concrete form to his often overwrought fantasies.

Needless to say, Lovecraft has been a tough nut to crack for filmmakers drawn to his work. His obsession with describing things in detail gives the impression that there’s something inherently cinematic, intensely visual in his work … but of course a movie is more than merely a collection of vivid images; it needs to exist in time as well, to move, and so almost everyone who has made the attempt ends up transforming the original material virtually beyond recognition.

Roger Corman tried with a script by Charles Beaumont which drew on The Case of Charles Dexter Ward. But they added a “poem by Edgar Allan Poe” and ended up calling it Edgar Allan Poe’s The Haunted Palace (1963), cast Vincent Price in the lead, and HPL all but disappeared from the equation.

Die, Monster, Die! (1965), directed by Corman’s long-time production designer Daniel Haller, was based on Lovecraft’s best story, The Colour Out of Space, in which a meteor brings some kind of (probably radioactive) poison to a remote New England farm. Boris Karloff was transformed and driven mad by the alien element, but once again, there didn’t seem to be a lot of Lovecraft’s essence left. (This story has been adapted numerous times with varying degrees of fidelity and success: Henrik Möller’s Feed the Light [2014], Huan Vu’s Die Farbe [2015], Richard Stanley’s Color Out of Space [2019].) Haller tried again in 1970 with The Dunwich Horror, incongruously casting Sandra Dee and Dean Stockwell in the lead roles.

David Greene’s The Shuttered Room (1967), based on one of August Derleth’s posthumous “collaborations” with HPL (completing one of the many story fragments he left behind), strips all trace of the supernatural out of its something-in-the-attic narrative, but I have to confess that I’ve had a strange affection for this oddity (shot in England, pretending to be New England, with none other than Gig Young as the hero tackling hostile locals led by Oliver Reed) ever since I first saw it on TV in the late ’60s.

More recently, Stuart Gordon and Brian Yuzna grafted sex, gore and black comedy onto HPL with the Re-Animator films (1985, 1990, 2003), and there have been a number of other fairly undistinguished attempts: Gordon’s Dagon (2001, The Shadow Over Innsmouth), Dan O’Bannon’s The Resurrected (1992, Charles Dexter Ward again), Dan Gildark’s oddity Cthulhu (2007), very loosely based on Innsmouth again, with the added twist of a gay hero and themes of conflict between religion and sexual identity – not at all what HPL had in mind!

The attraction of Lovecraft

So – despite the intractable nature of Lovecraft’s writing, filmmakers can’t seem to resist the pull. Is it the nameless monsters (which are generally best left un-visualized; the giant clawed and tentacled horrors exhibit a child-like, even childish sense of monstrosity), the incessant descents into madness, a deep streak of nihilism which insists on the puny insignificance of this species which has tended to see itself as the final aim of evolution?

Ever since his stories began appearing in the pulps in the late ‘teens, Lovecraft exerted a powerful influence on his readers, so much so that many of them began writing their own stories set in his imaginative universe. Not surprisingly, most of these (August Derleth, Robert Bloch, Donald Wandrei, et al.) typically put more emphasis on narrative than HPL himself, making much of their work more overtly readable than his, although much of it also lacks the sense of all-consuming obsession which was the major appeal of the original.

Probably no other writer (apart from Conan Doyle, whose Sherlock Holmes stories have had as much appeal to readers and other writers as Lovecraft’s horrors) has been as much imitated, pastiched, honoured by sincere homage. Part of this adoration is reflected in what might be termed the cinematic equivalent of fan fiction. The IMDb lists more than a hundred “adaptations” of his work, and most of these are more or less amateur short films (many collected in a series of DVDs called The H.P. Lovecraft Collection). 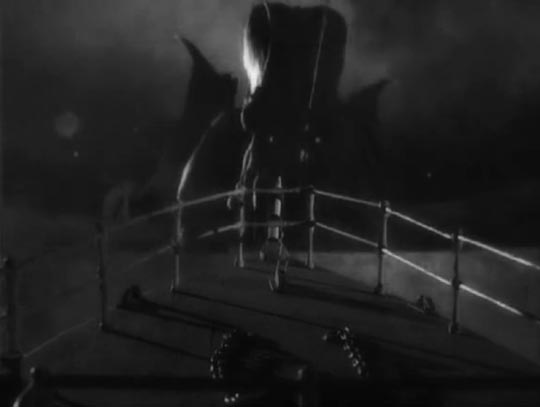 The H.P. Lovecraft Historical Society, formed by a group of Call of Cthulhu role-playing gamers in the mid-’80s, has established a mini industry with stage, radio and film adaptations of HPL’s work. Andrew Leman and Sean Branney have raised this genre to new levels, although Leman’s first attempt, 1988’s The Testimony of Randolph Carter, based on a very early, very brief story, was a not very auspicious start. Shot on VHS, it stretches out the slim narrative – Carter and his friend Harley Warren go looking for a gateway to the underworld, finding it in a remote graveyard; Warren goes down and apparently dies at the hands of some entity, driving Carter mad – to almost an hour; but despite its technical and aesthetic limitations, it does reveal Leman’s commitment to the source. 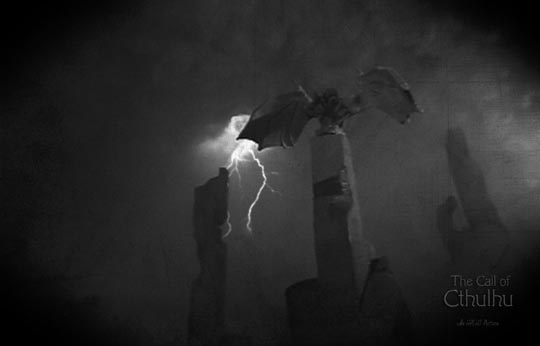 Many years passed before the HPLHS tackled the adaptation issue again, but they made a quantum leap with 2005’s 47-minute Call of Cthulhu. Despite limited resources, writer Branney and director Leman hit on a brilliant idea: they made the film as if it had been produced in the year the story was first published, 1927. Their faux silent film (with an excellent score by Troy Sterling Nies, Ben Holbrook and Nicholas Pavkovic) manages to capture much of the flavour of Lovecraft’s writing by stylistically honouring an attachment to the past, the monochrome images echoing HPL’s immersion in ancient texts. With its miniatures, spartan sets, stop-motion animation, and stylized performances, the filmmakers create a charming effect which, while not exactly scary, is steeped in an air of authenticity.

Now, they’ve stepped up their ambitions with The Whisperer In Darkness, co-written by Leman and Branney, and directed this time by Branney. The original story was published in 1931, so they’ve made this a talkie. But, in going feature-length, they’ve been faced with many of the issues which have undone earlier adapters of Lovecraft, most particularly the need to inject narrative and dramatic incident into his static story.

The original consists largely of the academic skeptic Andrew Wilmarth reading lengthy letters from Vermont farmer Henry Akeley, who claims that his remote property is under siege by the Mi-Go, alien monsters with the usual claws and tentacles; Wilmarth is inclined to think the old man is delusional, but becomes intrigued as bits of evidence trickle in. He eventually pays a visit to the old man, whom he finds confined to a dark room, barely able to speak because of “asthma”. Akeley tells him all about the aliens and their plans … leading to one of Lovecraft’s typical terrible revelations with which the story ends.

As Leman and Branney say in the lengthy making-of on the disk, this basically leaves the narrative without a third act. So they invent new characters and an entire, action-packed final half-hour. This is where, unlike Call of Cthulhu, The Whisperer In Darkness departs significantly from fidelity to the way Lovecraft wrote his stories; the abrupt transformation of the dry, bookish Wilmarth (Matt Foyer) into an action hero is hard to swallow. And, although the filmmakers once again have done wonders with their limited resources, the budget really doesn’t stretch far enough to pull off the effects-laden ending … although the combination of models and CG is superior to the average Sci-Fi Channel movie, it falls short as FX spectacle while simultaneously shattering the illusion of an early ’30s movie which the luminous black-and-white hi-def photography, sparse but effective production design, and committed performances have maintained for the film’s first two-thirds.

But perhaps these criticisms are unnecessarily churlish as so much of the film is so well done. Branney and Leman open up the early parts of the story skillfully, particularly in establishing the central theme of the too-rigidly rational Wilmarth confronting things which undermine the certainty on which his identity depends. The debate between Wilmarth and Charles Fort, broadcast by the NBC radio network, is written and performed with a great deal of humour and energy – Leman’s turn as Fort is one of the film’s highlights. In fact, the film’s greatest strengths are in the area of character rather than the bigger dramatic elements; Wilmarth’s gradual unhinging, the creepy performance of Barry Lynch as Akeley, the sinister bonhomie of Daniel Kaemon’s Mi-Go collaborator P.F. Noyes, even Autumn Wendel as the very un-Lovecraftian juvenile Hannah Masterson, who pluckily helps Wilmarth only to meet an unexpected end.

And speaking of ends – there are signs that Leman and Branney, having added that action finale, found themselves stuck. Lovecraft’s original, as with so many of his stories, concluded with a last, abrupt (supposedly terrifying) revelation … but where to go after throwing in aerial combat and self-sacrifice? The Whisperer In Darkness has a string of four mini-endings (on the commentary track the filmmakers joke about doing a Lord of the Rings), culminating with what seems very much like a complete violation of the protagonist’s character as depicted throughout the film …

But even if Whisperer (with another terrific score by Troy Sterling Nies) isn’t as successful as Call of Cthulhu, the filmmakers’ enthusiasm (as expressed in the extensive extras on the disk) is infectious. I hope the HPLHS continues to mine Lovecraft’s work for this kind of imaginative cinematic play. As their logo (another nicely period-appropriate detail) puts it: Ludo Fore Putavimus – “thought it would be fun” … and it is.