The Disco Exorcist (2011) is Rhode Island director Richard Griffin’s ode to ’70s exploitation and as such is difficult to criticize. What it does, it does very well … the question is whether it’s actually worth doing. Although shot on digital video, cinematographer Jill Poisson (along with some post-production enhancement) has caught the look of ’70s exploitation perfectly – the garish day-glo colours, the overuse of star filters, the slightly overlit cheap sets dressed with lava lamps and black velvet paintings. This movie has a kind of visual authenticity lacking in Grindhouse, Robert Rodriguez and Quentin Tarantino’s similar attempt to honour the sleaze of bygone days.

The cast for the most part achieves a perfect balance between playing straight and mocking the period’s cheesy acting. The three leads in particular, and a brief turn by theatre actor Michael Thurber as an amusing stand-in for Anton LaVey, indicate that regional filmmaker Griffin definitely has talent. For the most part, within its limited intentions, the movie is well-directed and edited. Gore and makeup effects are effective … it’s all very much like a lost grindhouse movie someone dug out of a forgotten basement. 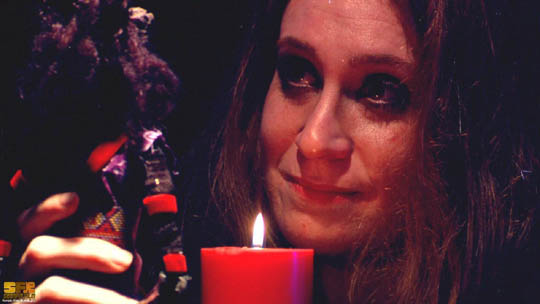 Perhaps, in a way, it’s too successful. Pastiche is a tricky thing. Too faithful to its inspiration, and what’s the point? Too mocking, and why bother because condescension towards what’s being parodied makes the effort seem wasted. There are many reasons why some of us enjoy watching low-budget exploitation movies: sometimes they actually overcome their limitations with imagination, sometimes they’re illuminating about the time and culture they rise out of, and sometimes they’re actually entertaining in their awfulness, which makes them good party viewing. The Disco Exorcist aims for the latter, trying to be funny by being bad, but in an affectionate way. To some degree, it succeeds, but the script (by Tony Nunes) isn’t as funny as it needs to be, so as a viewer you fall back on the narrative to maintain interest. 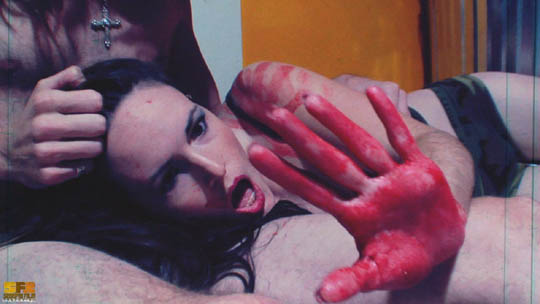 Unfortunately, the movie doesn’t follow the most interesting elements of the story. In trying to cram as much in as they can, Nunes and Griffin end up leaning more towards sexploitation than horror and too much of the running time is given over to softcore scenes at the expense of suspense and scares. Which is too bad because Ruth Sullivan gives a strong performance as Rita Marie, a woman justified in her anger, while the “romance” between Rex and Amoreena never rises above a shallow porn movie fantasy. The one time when everything really comes together is the sequence which intercuts Rex and Amoreena’s athletic coupling with Rita Marie’s ceremony summoning some kind of vengeful spirit. Here, Griffin shows visual and narrative imagination and you’re left wishing he’d set out to make a slightly more serious horror movie.

It’s always interesting to see what’s being done on the margins, in places not often associated with film production, and The Disco Exorcist is good enough to make you wish that Griffin and his cohorts might try something a bit more ambitious than mocking things that are so easy to mock. In every respect, this is a huge improvement over Griffin’s 2004 amateurish zombie comedy Feeding the Masses, but I think I’d still rather watch William Girdler’s Abby (1974) again to get the authentic exploitation experience.

Genre On Disk, part one