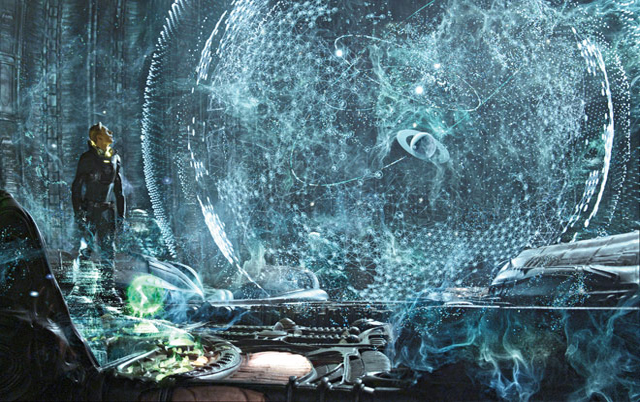 David (Michael Fassbender) on the bridge of the alien ship

Perhaps disappointment isn’t quite the right word. I went into Ridley Scott’s new movie this past week without terribly high expectations. When a filmmaker decides to return to his first big hit 33 years later, it’s difficult not to believe that he’s running out of steam. The fact that he’s also working on a new Blade Runner project just reinforces that idea. But still, I was hoping he might have found something of interest to revisit in the Alien universe.

As the film got underway, although the 3D seemed as extraneous as it is in most movies, I was initially engaged (after the obscure prologue and a somewhat trite scene with Noomi Rapace and Logan Marshall-Green discovering some ancient cave paintings out of Chariots of the Gods) by Michael Fassbender’s performance as David, the android caretaker of the ship “Prometheus” on its way to a distant moon which may hold the key to human origins. Seemingly naively charming, David hints at inscrutable depths which later manifest as a dangerous agenda which threatens the survival of the other crew members … oh yeah, just like Ian Holm in the original film (and like Holm, he ends up with his head ripped off … an occupational hazard for androids apparently).

I was soon starting to get restless and eventually irritable, partly because Prometheus contains a lot of echoes of earlier Alien movies which give it a half-baked, warmed-over feel, partly because the script (by Jon Spaihts and J.J. Abrams-cohort Damon Lindelof) seems deliberately opaque, obscuring narrative details in order to make the movie appear “deep”. I could even deal with that if the characters had been sketched in, but just about everyone on board is a cipher. One of the strengths of the original Alien, of course, is the well-observed personal and social dynamics of the worker-management collective on board the “Nostromo”. Here in Prometheus, we get a bit of tension between the frosty bitch in charge (Charlize Theron) and the idealistic young archeologist Elizabeth Shaw (Rapace), but no one else even registers. 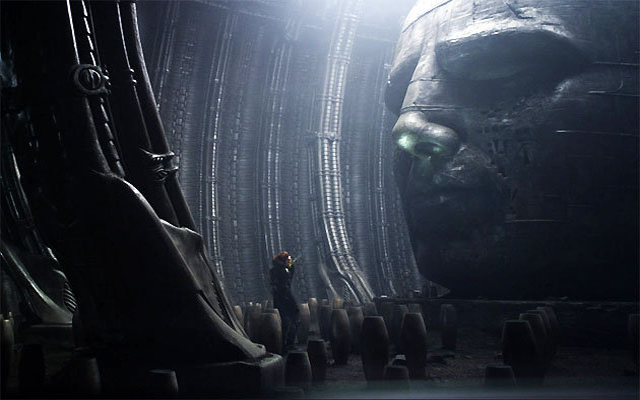 But what really began to annoy me was the conflict between what was happening in the film and my memories of Alien and its sequels. Yes, I know that Scott claims that this isn’t a prequel, but there are many elements, visually and narratively, which echo the earlier films, so when this new one diverges from what we already “know”, it starts to become confusing. How come we get a bunch of machined cylinders oozing black oil rather than eggs incubating facehuggers? (That black oil and what happens to Marshall-Green triggered memories of The X-Files and I couldn’t help wondering whether the writers had become confused about what universe they were supposed to be dealing with.)

And at the end, after the alien ship has crashed, I was expecting the pilot – infected by a redesigned, giant alien facehugger – to crawl back and climb into the command seat so that he’d be there, albeit fossilized, by the time the “Nostromo” showed up. But of course, this is supposed to be a different planet … which means that the galaxy must be littered with crashed alien ships harbouring various weaponized biological forms waiting for us humans to stumble on them …

Finding Prometheus murky and under-developed, I naturally turned to the Internet and discovered that Scott, Lindelof and the actors have all spoken at length about what’s “really going on” in the movie. And they apparently have this whole vast mythology at the back of their minds … they just felt that it would be better if they didn’t include any of it in the actual film.

The “engineer” preparing for death in the prologue

That prologue: how exactly is a viewer supposed to know that the scene takes place millions of years in the past? That the alien who drinks the black oil and begins to disintegrate as a huge spaceship leaves him behind isn’t committing some kind of suicide? That when he falls into the raging river and dissolves, he’s actually triggering the start of life on this barren world by spreading his DNA? None of that information is anywhere apparent in the film.

So what we have essentially is a ponderous, dull story burdened by vague but supposedly “meaningful” dialogue, intermittently interrupted by graphic “horror” scenes seemingly injected solely because they’re expected to be there in an Alien movie … although (perhaps from boredom) Scott insists on making everything a bit “different” from everything we’ve already seen in the series. I’m not against obscure and difficult movies on principle (three of my favourite directors are Tarkovsky, Angelopoulos and Tarr, all of whose works are very dense and often extremely indirect); what I do object to is sloppy writing which leaves the story’s central ideas entirely out of the script, requiring explanations from the filmmakers after the fact. On top of which, we get an ending which promises a sequel … and who knows, maybe more than one as Scott threatens to inflict a Lucas-like plague on the series’ fans.

Final note: it may be significant that Lindelof also produced Abrams’ Star Trek “reboot”. Like that overblown travesty, Prometheus blithely seems to ignore the history and mythology of the Alien series, making up a bunch of new stuff for no particular reason. As Star Trek ends by literally wiping out the entire 40-odd year history of the franchise so that Abrams can “start fresh”, Prometheus claims to inhabit the same universe as the Alien series, but scraps pretty much everything we’ve seen before.

Of all the commentaries I’ve come across so far, I’d have to say that this is my favourite: