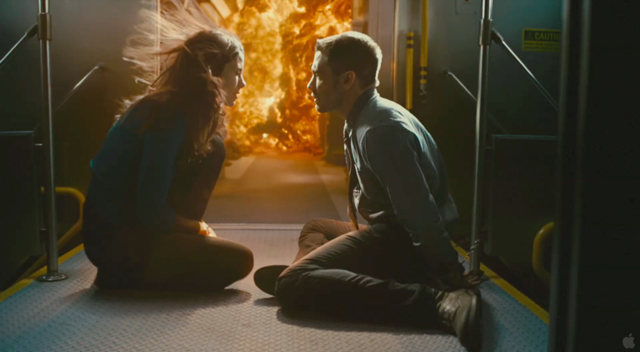 Working on my documentary about movie-going, I’ve been thinking about this quite a bit lately. I guess part of it might simply be due to getting older. I can recall being puzzled decades ago by the lack of interest a lot of older people had in what was going on in film – how could it not be important to them what notable directors were up to? 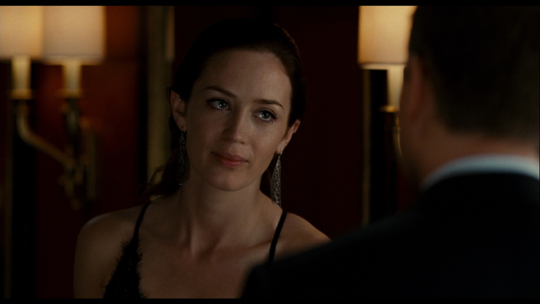 But there are other things, of course. One is the actual theatrical experience. Back in the day, you had to catch a movie when it showed up in the theatre, because you might not get another chance – or at best, you’d get to see it pan-and-scanned on TV a year or two later. Seeing a movie in a theatre was THE way to see it. And there were ancillary factors too: you’d enter an auditorium lit by subdued lights and there facing you would be large, heavy curtains as if the coming experience was gift-wrapped. Music was probably playing and the gathering audience engaged in subdued chatter. Then the lights would slowly dim and you’d hear the heavy hum of machinery pulling those curtains back, revealing a vast white expanse which would suddenly glow with the light from the projector. Previews would roll, offering tantalizing glimpses of things to come (usually quite careful to hype the excitement without actually revealing too much detail) … and then, quite often, the curtains would roll shut again and the house lights would rise for a moment, before plunging us back into a deeper darkness as the projector was fired up again, the curtains rolled back, and everyone gazed forward intently, fully focused on the screen as a familiar studio logo announced the start of what we’d come for. 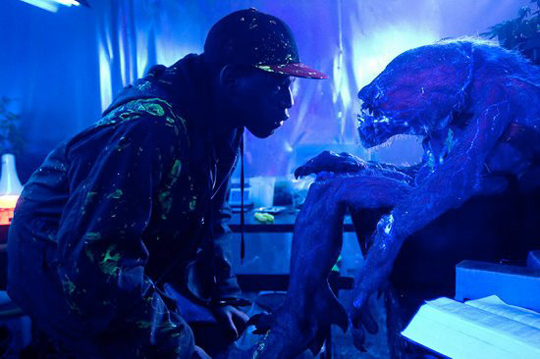 Nowadays, when you walk into a theatre, the screen is lit up and buzzing with the “pre-show”, a noisy barrage of “entertainment news” and advertising, creating an irritating distraction which forces the gathering audience to talk loudly over the noise. When the pre-show draws to a close, we get the real ads – cars, cell-phones, soft drinks … here we are, paying ten bucks or more for a movie and we’re being forced to watch commercials; what better way to devalue the experience? Then the endless trailers which begin by trying to intrigue you, but then, distrusting the audience’s ability to imagine, unfolding the entire plot, including the biggest scenes, the best jokes and, as often as not, giving away the ending as if the studio hacks really do believe we only want to see something we already know all about. Finally, with no separation between all this audio-visual noise and the movie we’ve paid to see, the feature starts as if it’s merely an extension of the “pre-show”, nothing special, just more distraction – no wonder people keep on talking, playing with their cell-phones, eating nachos …

Hobo With a Shotgun

Of course the business of movie exhibition was always about making money, but back in the day the people in charge believed that they should try to offer their customers some kind of grand experience in exchange for the price of a ticket. But in the past three decades, the entire system of exhibition has transformed from one which was predicated on creating an atmosphere of excitement, anticipation, specialness, into one which merely wants to throw stuff at you so you’ll think you maybe got your money’s worth.

I used to walk out of a theatre with a heightened sense of awareness, the world outside somehow intensified by the vicarious experiences I’d just had in the dark. Now I wander out into the lobby with its ubiquitous monitors flashing more advertising, the smell of deep-fryers and popcorn, the endless blaring noise of the video arcade which has been put there to make sure that ticket-buyers don’t get a single moment when they aren’t being distracted … but seldom do I get that old feeling of having been, even if only briefly, transformed by a connection made between the screen and my imagination.

Of course, I seldom get that feeling at home, watching something on my TV – but watching at home, I’m spared the sense of disappointment; I know going in that home viewing is a smaller, diminished experience. And yet I tend now to watch things at home that may matter to me, while more often than not reserving my theatre-going for empty distractions. Probably only about a quarter of what I went out to see in 2011 could be considered serious movies – the rest were just “entertainment” (though quite a few of them turned out not to be very entertaining – even Robert Downey Jr couldn’t seem to work up any enthusiasm for Guy Ritchie’s busy but exhaustingly shallow Sherlock Holmes sequel). And of those serious ones, about a third left me feeling vaguely dissatisfied. 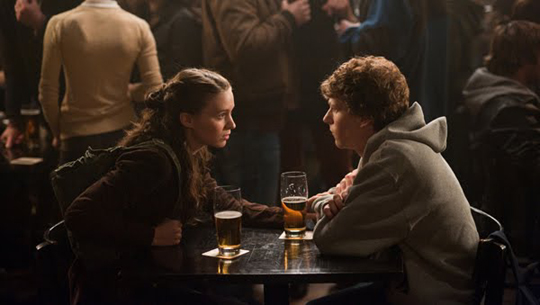 Meticulously crafted, David Fincher’s The Social Network at least had a script which displayed some wit and performances which attempted to create a sense of living characters. And yet I still found it as light and disposable as the Facebook experience itself. The Social Network seems as close to a great piece of filmmaking – like, say, Bonnie and Clyde or Casablanca – as a Facebook “friend” is to an actual human being with whom you’ve spent intense and intimate time, who you could justifiably call a friend. 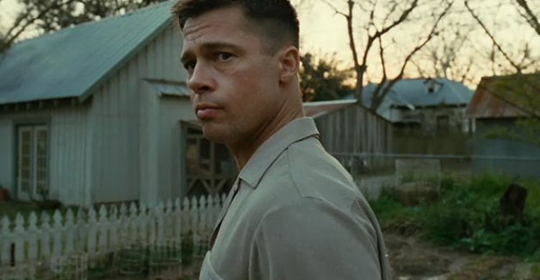 The Tree of Life

I think my admiration for the work of Terence Mallick may have fooled me about The Tree of Life. There were images and scenes that hit me with great power and when I saw it, I felt that I’d want to go back and take another look, to dig into it the way I have with his earlier films. But the truth is – unlike the almost 40-year-old Badlands (1973) which remains vivid and fresh in memory – The Tree of Life has already faded and I don’t feel any particular urge to revisit it after all. 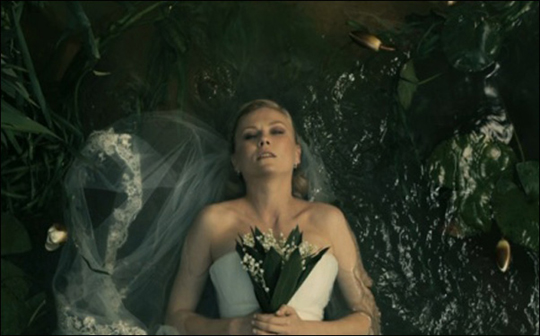 And I had mixed feelings about Lars von Trier’s Melancholia. I’ve liked virtually everything he’s made, and there are fascinating images and performances in this new film – but the shaky-cam technique seemed unnecessary and perfunctory to me. Rather than a sense of endless curiosity breathlessly exploring a world that’s moving too quickly to be kept up with, the technique mostly felt like creative laziness or mere habit, an odd choice given the stunning formal beauty offered by other moments in the film. But perhaps I was troubled mostly by the lack of creative distance between the filmmaker and the painful condition of his main character. Kirsten Dunst as Justine gives possibly the greatest portrayal of depression ever put on film, but it’s stiflingly claustrophobic to be trapped with her for two hours and in the end almost a relief to have the whole world end just to release her (and the audience) from her pain.

I realize that Melancholia is not intended to be “entertaining”, but I also felt that it wasn’t particularly enlightening. We don’t really learn anything about Justine’s existential state, merely bear witness to the details of her disease. 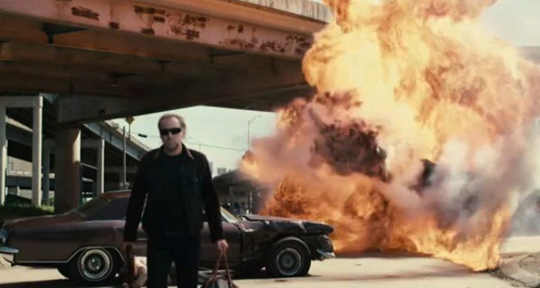 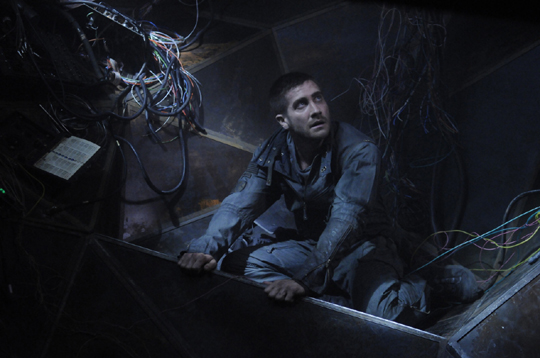 But my best theatrical experiences of 2011 were actually with two movies which bear some generic similarities to each other and which by coincidence were released within a few weeks of each other back in the spring. Both Duncan Jones’ Source Code and George Nolfi’s The Adjustment Bureau blend the uncertainty about existential reality which characterized the work of Philip K. Dick (Nolfi’s movie was actually based on a Dick story, Jones’ an original script which echoes a number of Dick themes) with well-drawn characters and a genuine feeling for romance. Both movies are essentially love stories in which ordinary characters suddenly find themselves confronted with a vision of vast, complex forces which make their own lives seem tiny and insignificant – and their response is to embrace those lives and invest them with an inner meaning which eventually reestablishes a sense of balance between the individual and the cosmic. 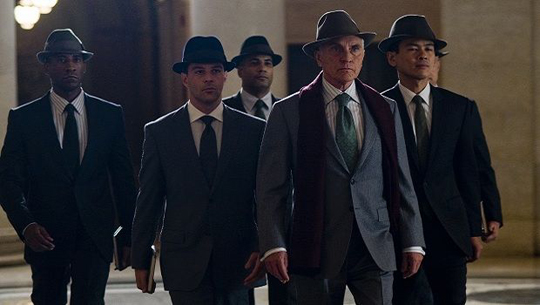 I suppose it could easily be argued that these two films are essentially reactionary, or at best conservative, in their assertion of the primacy of human emotion and personal desire over social, historical and cosmic forces … but the fact is that we do see the world from within our own small perspective and in the case of The Adjustment Bureau and Source Code, rather than shying away in horror and despair from that cosmic vision, the characters end up embracing their places within it and surely that’s a positive thing.