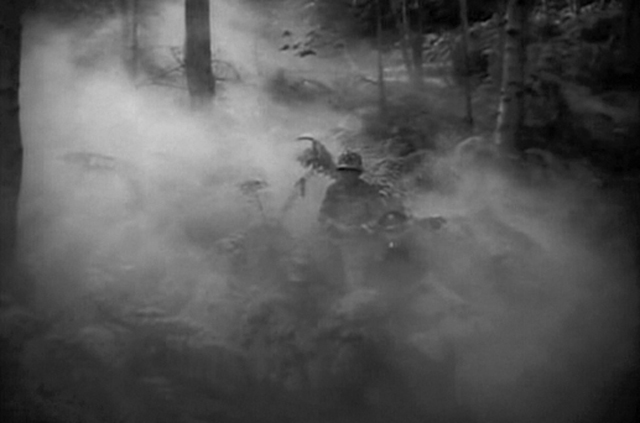 As readers and viewers, we tend to be greedy. We want access to everything a creator may have done, regardless of that creator’s wishes. If an author dies leaving an unpublished manuscript, we expect to be given access to it, even if the author him- or herself had clearly stated that it wasn’t ready to be seen and wanted it kept out of sight. What right does the author have to decide that his or her work should be suppressed?

When I started writing about Stanley Kubrick’s movies a while back, I commented on the inaccessibility of his first feature, Fear and Desire (1953), a film he didn’t want anyone to see. So I was surprised when it turned up on the Turner Classics schedule recently, shown as part of a tribute to the preservation work of the George Eastman House. Eager to see it, I had a friend record it for me.

In their introduction, Robert Osborne and Jared Case of the George Eastman House briefly discuss Kubrick’s wish to have the movie suppressed, but neither of them addresses the issue directly – what right do they have, 12½ years after his death, to screen the film to a wide public audience?

Since the early ’60s, Stanley Kubrick somehow managed to assert more control over his work than virtually any other major filmmaker. He was obsessively concerned with having the audience see just what he wanted them to see, without outside interference. So the fact that he didn’t want anyone to see his first feature shouldn’t be treated lightly. And having now seen Fear and Desire, I can understand his concern. Both crude and pretentious, this first feature is not merely an apprentice work (that would be Killer’s Kiss) – it’s a messy student effort which reveals just how little Kubrick knew about filmmaking when he started out. Watching it is something like dipping into a celebrated writer’s grade school notebooks to read one of those “what I did on my summer vacation” themes kids were once forced to write.

Prior to this first feature, Kubrick had made only two documentary shorts, both in 1951. Day of the Fight is a brief portrait of a young boxer preparing for his latest bout, while Flying Padre depicts a priest who uses a small plane to minister to his sprawling, sparsely populated New Mexico parish. Both are extensions of Kubrick’s documentary still photography, but while there are interesting images, they are completely conventional in form. Shot silent, they have non-stop narration which not only describes what’s on screen, but also tells us what it means, even spelling out the thoughts of the characters. Two years later, this “tell rather than show” approach is carried over into Fear and Desire.

Working from a script by Howard Sackler (The Great White Hope, 1970), Kubrick concocts a vaguely allegorical depiction of the madness of war – no particular war, as the portentous opening narration puts it, but any war, every war … Strangely, that opening narration sounds uncannily like the start of an Outer Limits episode, Soldier (script by Harlan Ellison, directed by Gerd Oswald, 1964). Typically, a war story stripped of specificity is likely to end up stumbling over trite cliches, and Fear and Desire is no exception.

Pvt. Fletcher: “I’m all mixed up. I wish I could want what I wanted before. I’m not built for this.”
Lt. Corby: “Nobody ever was. It’s all just a trick we perform.” 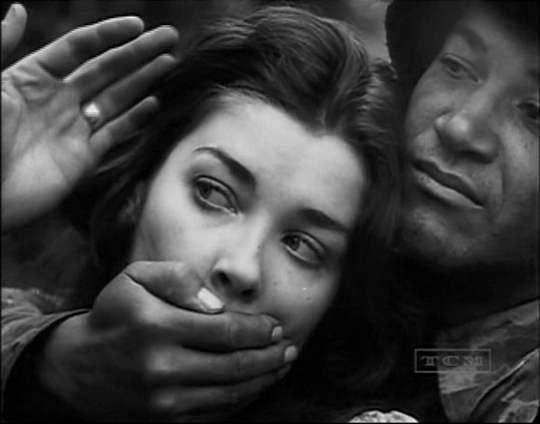 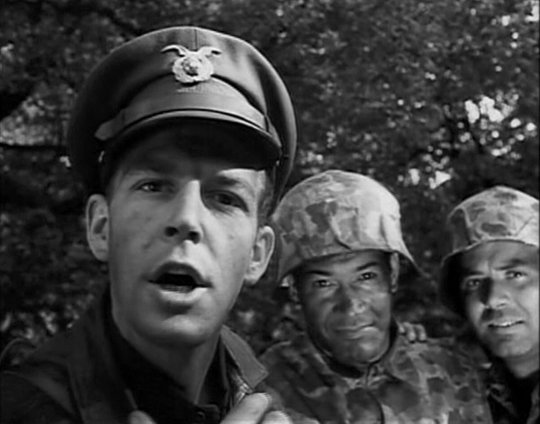 Four men are trapped in a forest behind enemy lines: the rather weak Lt. Corby (Kenneth Harp), the aggressively insubordinate Sgt. Mac (Frank Silvera), the increasingly deranged Pvt. Sidney (future director Paul Mazursky), and nondescript Pvt. Fletcher (Stephen Coit). While the lieutenant decides that they should build a raft to float on a river back to their own lines, Mac becomes obsessed with killing an enemy general they’ve spotted at an airfield on the other shore. When a woman (Virginia Leith, perhaps best known as the head in a dish in Joseph Green’s The Brain That Wouldn’t Die, 1962) stumbles on them in the woods, they take her prisoner. The lieutenant seems to suggest that they might rape her, but Mac sarcastically reminds him that they should remain “civilized” – so they tie her up and leave her guarded by Sidney, who goes over the edge and kills her. Mac creates a suicidal diversion, enabling Corby and Fletcher to attack the general and make their getaway. 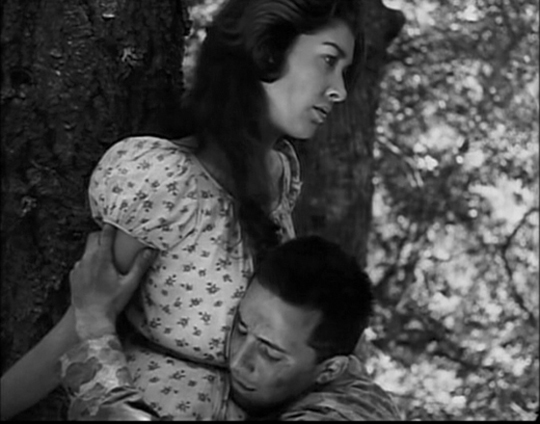 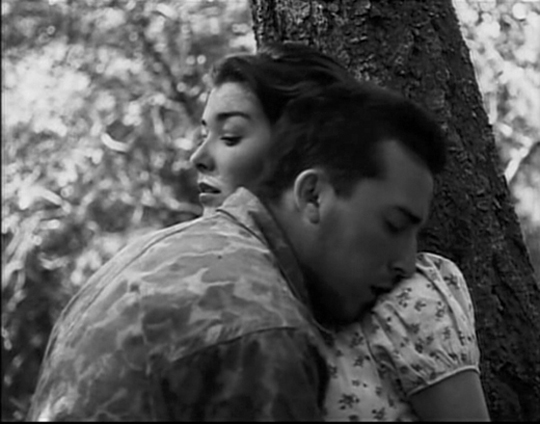 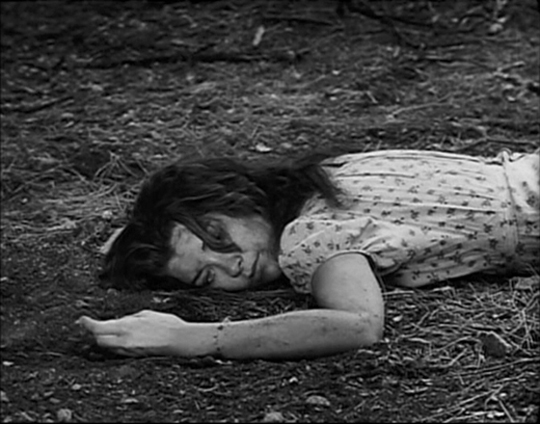 In lieu of any real dramatic tension, Kubrick uses a cacophony of “inner voices” to evoke the fear and desire coursing through the men as we see undramatic shots of them walking about in the woods. The effect is like a crude trial run for the technique Terrence Malick used to great effect in The Thin Red Line (1998), but no connection is ever really established between this inner turmoil and what we see on screen. And visually, the film is an amateurish mess. While Kubrick’s photographer’s eye catches some striking images of the men’s faces, they remain superficial reminders of documentary photos of actual soldiers in combat which he cuts almost arbitrarily into rudimentary staged scenes lacking any sense of visual continuity, screen direction or narrative space. 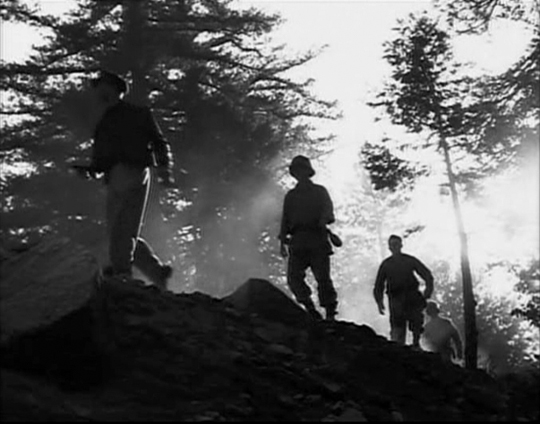 Although Killer’s Kiss, made just two years later, still lacks a great deal with regard to storytelling, it’s remarkable that Kubrick had in so short a time, with just one intervening documentary short (The Seafarers, 1953), mastered so many of the technical aspects of filmmaking which are absent in Fear and Desire, and in just two more years honed his craft through The Killing to reach the kind of technical and dramatic mastery he shows in Paths of Glory. It’s possible to believe that — unlike later directors who grew up with movies, such as Spielberg and Scorsese — Kubrick lacked an “instinct” for filmmaking, that he developed his skills by a sheer act of will, the same determination which later led to the obsessive control he exerted over his work. 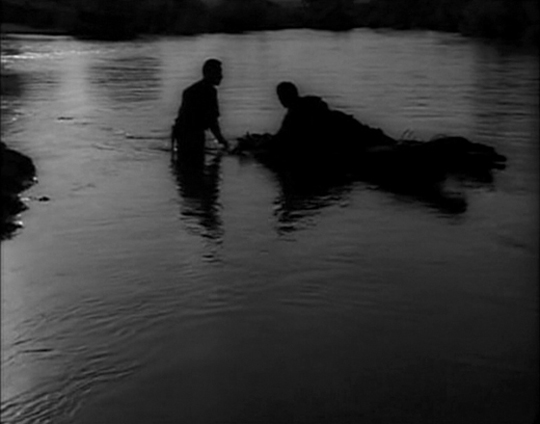 The only real value in watching this first feature is seeing that rapid development thrown into startling relief. The 24-year-old Kubrick had ambitions which exceeded his very limited budget and his undeveloped filmmaking skills. At best, Fear and Desire is a clumsy sketch which barely hints at themes he would go on to explore in greater depth throughout his career. But it has little if any intrinsic value as a work in itself and one can understand and sympathize with Kubrick’s wish that it disappear from his filmography. Although my curiosity has now been satisfied, I almost wish the film had remained a legendary missing piece in the Kubrick canon.