Hangover Square and the mysteries of adaptation

Given the vast differences between the written word and the moving image, it’s not surprising that the translation from text to screen can sometimes produce strange results. David Selznick treated source text as gospel, using Margaret Mitchell’s novel as a virtual script for his massive and very popular 1939 adaptation of Gone With the Wind (though his casting was less than satisfactory to some fans of the book, and even Mitchell herself, who felt that Clark Gable was inappropriate for Rhett Butler). Francis Coppola treated Mario Puzo’s The Godfather the same way in 1972, his respect for the pulpy novel paradoxically resulting in a piece of classical narrative much richer than the source. But this kind of faithfulness is not necessarily the best course to follow – Sam Mendes’ version of Richard Yates’ Revolutionary Road (2008) does follow the book quite closely, but in such a way that it seems to be preserving a worthy literary artefact rather than breathing new life into Yates’ bleak story: it’s all rather pretty and freeze dried. 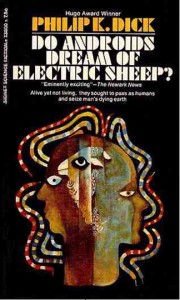 Often the better strategy is to take key elements and themes, and bend them to fit the new medium, trying to capture the essence of the original work while making it more cinematic. Ridley Scott’s Blade Runner invents an entirely new environment for its variation on Philip K. Dick’s Do Androids Dream of Electric Sheep?, replacing a de-populated, post-war San Francisco area with the endless dark city of Los Angeles, while retaining some elements from the book – the off-world colonies, the unhealthy J.F. Sebastian (J.R. Isidore in the book) who isn’t fit to leave the planet, and of course the ambiguity about what makes a person human and whether it’s possible for the androids actually to become human. 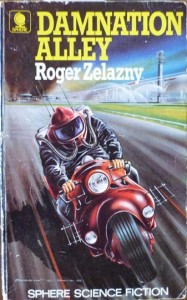 Then there are cases where the filmmakers strip away much of the original and come up with something which barely resembles the text. With a couple of gritty SF novels, Roger Zelazny’s Damnation Alley (1977, directed by Jack Smight) and William F. Nolan and George Clayton Johnson’s Logan’s Run (1976, directed by Michael Anderson), the movies became unrecognizable – dull, bloated, tone-deaf, completely missing the noirish qualities of the books. Somewhat better as a movie is Richard Fleischer’s Soylent Green, but it doesn’t have much to do with Harry Harrison’s excellent original novel, Make Room! Make Room!, which paints a grim picture of over-populated New York through a police procedural dealing with a murder: the whole “Soylent Green is people” theme was invented for the movie, while the book is essentially a realist novel set in a plausible near future.

But there are also cases where, despite the differences, the tampering, the distortions and even outright “re-invention” of a text, one can appreciate both versions on their own terms even while recognizing that they have little to do with one another.

I first saw John Brahm’s Hangover Square (1945) about three years ago, when it was released as part of the three-disk Fox Horror Classics Collection (along with Brahm’s The Undying Monster [1942] and The Lodger [1944]). It’s a great little movie, thick with atmosphere, and featuring the final performance of Laird Cregar, a fascinating and distinctive actor, who died at 31, just two months before its release.

Set in a damp, foggy studio backlot London, this is the story of rising composer George Harvey Bone, who is currently working on the concerto which will undoubtedly bring him international fame. He lives in Hangover Square, just across from Sir Henry Chapman, a famous conductor and his patron, and Sir Henry’s daughter Barbara (Faye Marlowe) who obviously loves George. Unfortunately, George meets and falls for Netta Longdon (Linda Darnell), an ambitious music hall singer, and his infatuation diverts him from his true work as he devotes his time to writing songs for her which help to make her a celebrity.

But George has a bigger problem than Netta: he is subject to blackouts during which he doesn’t know what he does. There’s no mystery for the audience, though, as the film opens with George stabbing a pawnbroker to death and setting fire to his shop (this particular incident is never explained). When he comes to, he begins to piece some clues together and fears that he may indeed have committed violence while unconscious. He and Barbara visit renowned police surgeon Dr Allan Middleton (George Sanders), and George is put under surveillance.

Apparently any loud, discordant sound will trigger a blackout and while the effect lasts, George will attack whoever a part of him sees as an obstacle to what he wants – which includes Barbara, whom he tries to strangle. George attempts to free himself from his obsession with Netta when he discovers that she has only been using him; the disposal of her body is one of the greatest moments in Gothic cinema, done in full view of a crowd celebrating Guy Fawkes’ Night in the Square.

As the police close in, George is desperate to complete his concerto and perform it at Sir Henry’s soiree, but by now he’s completely falling apart mentally and his world crashes around him in the fiery finale.

Brahm and Cregar (working together for the second time after the previous year’s version of The Lodger) have created a great tale of madness and murder. But, strangely, it has almost nothing to do with the book it’s based on. I just started reading Patrick Hamilton’s novels this past summer. He was a terrific writer with a fairly narrow range: many of his novels deal with working class and lower middle class characters in central London who spend much of their time in pubs and cafes, frequently getting drunk and becoming unhappily romantically obsessed with people who don’t return their feelings. His early trilogy Twenty Thousand Streets Under the Sky was quite effectively adapted by the BBC in 2005 (though marred by poor casting of the male lead). Although I really liked Brahm’s movie of Hangover Square, I knew that Hamilton himself didn’t have a good opinion of it, and having just finally got around to reading the novel, I can see why. 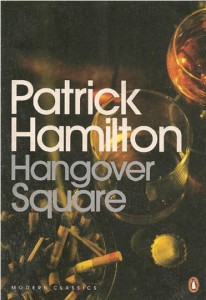 Patrick Hamilton wrote Hangover Square in 1941, setting it during the nine months leading to the outbreak of the Second World War – in other words, a contemporary story located in a world plunging towards violence. So the first major change wrought by scriptwriter Barre Lyndon was pushing it back to the gaslit, horse-drawn London of 1903. While the protagonist in both book and film bears the name George Harvey Bone (and Cregar is a perfect physical fit for the character Hamilton describes), in the original he is not a composer – in fact, he is unemployed, living slightly beyond his means on his savings and occasional gifts of cash from an aunt. But he does have the blackouts, supposedly a form of schizophrenia during which his normal personality is suppressed and he exists in a confused, detached state in which the world seems unreal to him. It is during these blackouts, which become more frequent as the story progresses, that this dark part of himself conjures confused plans to commit murder – specifically, the murder of Netta Longdon. 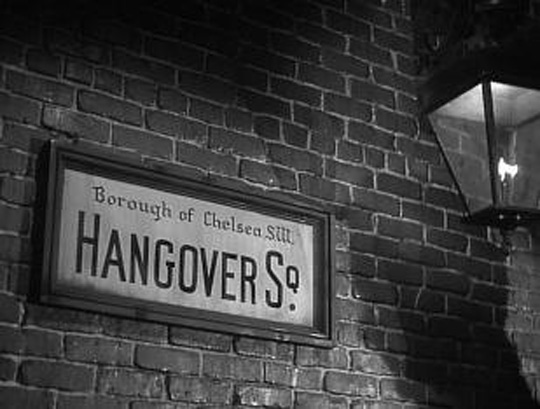 In the novel, Netta is an actress who has no career and is too lazy to make an effort to pursue one, other than by trying to insinuate herself into the circle of a major theatrical agent. She and her friends spend their time drinking themselves into a stupor – a common theme in Hamilton’s novels: he himself was an alcoholic, and he writes such a prodigious amount of drinking into many of his stories that the reader could almost get a contact hangover from them. Netta and her friends treat Bone with open contempt, but keep him around because they can sponge off him; and he stays with them because (as with many of Hamilton’s characters) he is utterly infatuated with the inappropriate Netta. But that hidden part of him knows that he is being abused by her, thus the vague plots to kill her …

The novel is grim, funny, pathetic and at times tries the reader’s patience because Bone is incapable of extricating himself from this deteriorating situation. You come to wish that the dark Bone would actually carry out his murderous scheme just to put an end to the humiliation. The final irony is that just as things do begin to turn around for Bone and he starts to acquire some confidence and self-respect, gaining a clear perspective on what has been happening and seeing a way out, just as the “normal” Bone does manage to extricate himself from his sordid bondage to the unpleasant Netta … that is when the dark Bone finally carries out his plan, just as the war breaks out.

The novel is a mixture of social realism and psychological horror, without a trace of the Gothic about it. So how did Fox end up transforming it into a period Gothic horror tale? One obvious factor was the desire of the studio executives to recreate the success of the previous year’s The Lodger, in which Cregar played a Jack the Ripper-type serial killer, also in a foggy, gaslit London … and so Bone, instead of a pathetic man with a mental illness, became another monstrous murderer (in the novel, until the final moments, he is not a killer at all, but rather the perpetual victim of others’ malice). But why make him a composer, a sensitive creative type, instead of a lower middle class idler? Why the peculiar conflation of art and violence? Whatever the genesis of these changes, they work beautifully on the movie’s own terms, even if they have nothing to do with the source. And they provided Laird Cregar with the best role of his very short career (sixteen films in five years, including great supporting roles in the noirs This Gun For Hire [1942, Frank Tuttle] and  I Wake Up Screaming [1941, H. Bruce Humberstone], as well as a suavely funny Satan in Ernst Lubitsch’s Heaven Can Wait [1943]) – he maintains the viewer’s empathy throughout, even when committing his crimes, and it’s this that creates such tension as he disposes of Netta’s body in full view of the crowd.

One last point: Barre Lyndon makes the title refer to an actual physical place, the part of London where George Harvey Bone lives, but in the book it refers purely to a state of mind, the “place” the constantly drinking characters all too often find themselves in as they drag themselves out of bed the next morning.