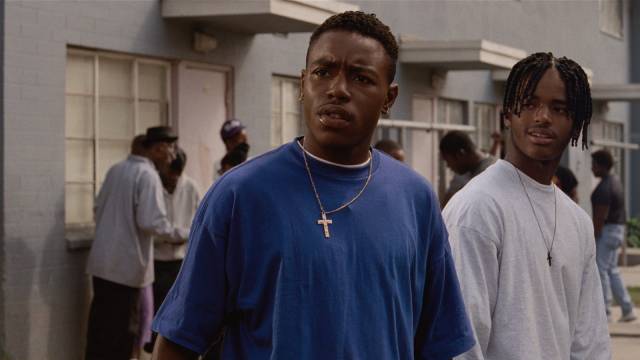 Caine (Tyrin Turner) considers his grandfather’s question “Does it matter if you live or die?”
in the Hughes Brothers’ Menace II Society (1993)

The presentation of Black experience in American movies has gone through a number of distinct phases, reflecting both social attitudes and commercial considerations. During Hollywood’s golden age, there was a strange mix of recognizing Black music as a powerful popular art form while depicting Black people with cruel, mocking stereotypes. The music was absorbed into the mainstream while actual people remained marginalized. In parallel, there was a whole (low budget) fringe industry of movies made by and for the Black community, invisible to the mainstream, but reflecting the conditions of Black lives lived in and beside a white society.

As pressure for civil rights increased, Hollywood needed to find ways to incorporate Black characters into mainstream narratives; but the studios also faced the continuing reality of prejudice among large sections of the white audience. For better or worse, Sidney Poitier became a kind of figurehead for this process; a fine actor, he was pressed into service as an avatar of non-threatening Blackness, his roles in movies like Stanley Kramer’s The Defiant Ones (1958), Ralph Nelson’s Lilies of the Field (1963) and Kramer’s Guess Who’s Coming to Dinner (1967) specifically crafted to reassure white audiences that, despite the protests and violence visible on the nightly news, there was really nothing to fear. 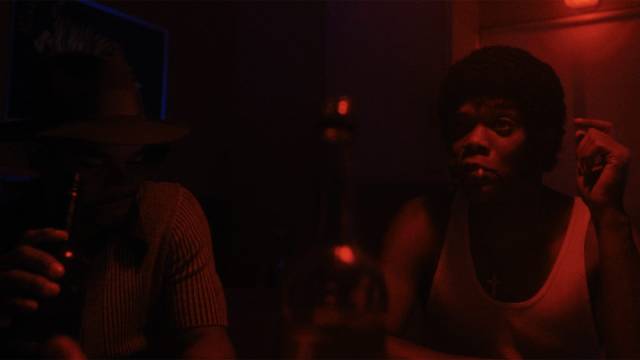 Poitier would eventually be criticized for a kind of complicity for his part in creating this image of an almost inhumanly saintly Black man who was here only to help white people feel better about themselves, and filmmakers like Melvin Van Peebles and Bill Gunn countered with messier and more complex depictions of Black life, asserting Black autonomy and refusing to accept the roles society tried to force on Black people. A movie like Sweet Sweetback’s Baadasssss Song (1971) was frightening for the establishment because it depicted a character who would not submit to the control of a society he deemed illegitimate. It was dangerous and threatening … and hugely successful with Black audiences. 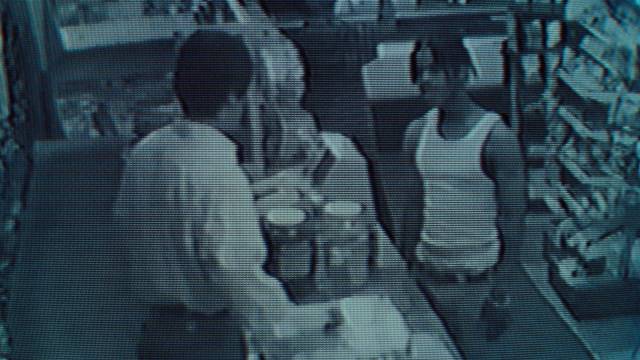 The industry couldn’t ignore this revelation of a barely tapped market and began to co-opt this anger for its profit potential. Thus was born the ’70s boom in blaxploitation, movies rife with crime, drugs and prostitution which paradoxically presented an image of social disruption for Black audiences while simultaneously creating a whole new set of stereotypes for white audiences, replacing the shuffling, obsequious servants of the ’30s and ’40s with pushers and pimps who seemed to confirm the belief in an innate criminality which had justified the repression of Black people from the days of slavery down to the present.

Early blaxploitation movies like Gordon Parks’ Shaft (1971) managed to incorporate with some nuance the defiant anger of Van Peebles’ movie into a more mainstream context, but as the decade progressed the new genre succumbed to cliches, absorbed into a commercial niche controlled by mainstream corporations which had no interest in a deeper analysis, simply exploiting sex and violence for profit. 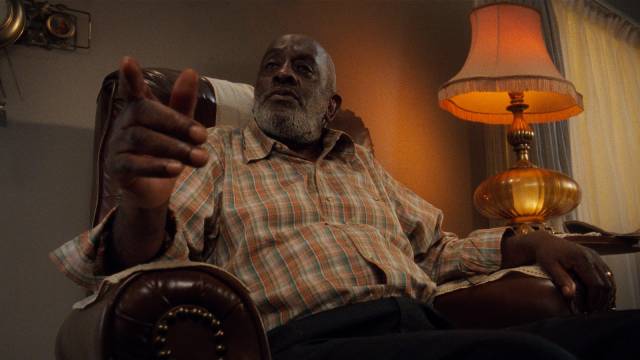 Film culture at large had been undergoing some major transformations over the past couple of decades, both because of the decline of the studios and the collapse of the Production Code in the ’60s and the concurrent rise of academic film studies. Up through the ’50s, filmmakers tended to be people (mostly men) who arrived in the industry having accumulated a wide array of life experiences which informed their creative work. From the ’60s on, many filmmakers came through the proliferating film schools. Rather than rooted in life, their approach was deeply informed by a study of movies and cinema history. Movies were increasingly about movies rather than the world – George Lucas and Steven Spielberg were the most prominent avatars of this change, with their emphasis on fantasy, while Martin Scorsese applied the lessons of film history to a cinematic world which might seem more rooted in reality, though a reality viewed through certain genre conventions. 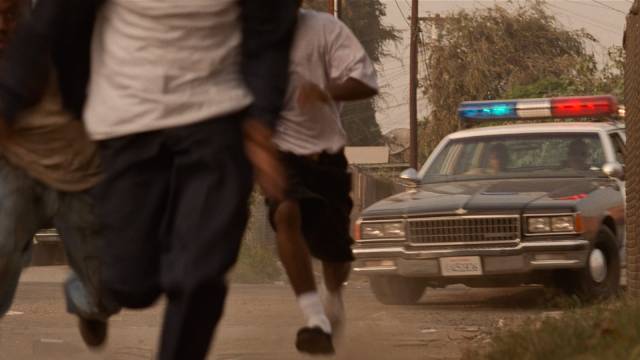 The police appear without warning

The commercial success of this new generation predisposed the corporations which now controlled mainstream production to back a lot of filmmakers who wouldn’t have had much of a chance with the old studios; between commercial blockbusters and smaller “Indie” films, new spaces were opening up and a new wave of Black filmmaking broke, greeted with both commercial and critical success. While some of these movies drew on elements from blaxploitation, on the whole they proved more complicated, using genre to explore more directly issues of race and class in American society. With his third feature, Do the Right Thing (1989), Spike Lee thrust those issues into the mainstream with a degree of energy and style which made it impossible for audiences to ignore fraught questions of racial and ethnic tension and police violence against the Black community. 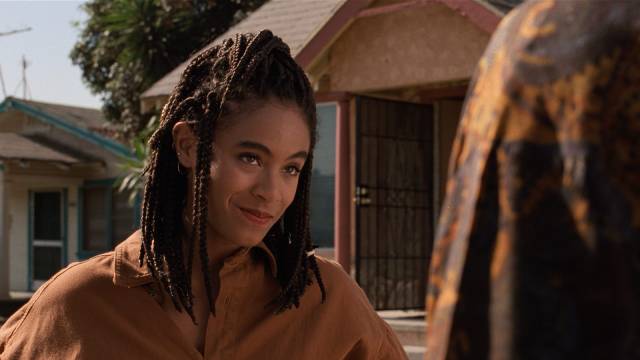 Ronnie (Jada Pinkett) tries to offer Caine a way out

Lee’s success helped other Black filmmakers to obtain backing for projects as varied as John Singleton’s Boyz n the Hood (1991), which explored ghetto life in Los Angeles, and Bill Duke’s Deep Cover (1992), which transformed the cop movie into an exploration of Black identity in a deeply racist society. On the heels of Singleton and Duke, twin brothers Allen and Albert Hughes, who had been making a name for themselves with hip-hop music videos, received backing from New Line Cinema for their first feature – not surprising, perhaps, given the particular pop culture moment. What was surprising, though, was that the brothers were just twenty at the time. 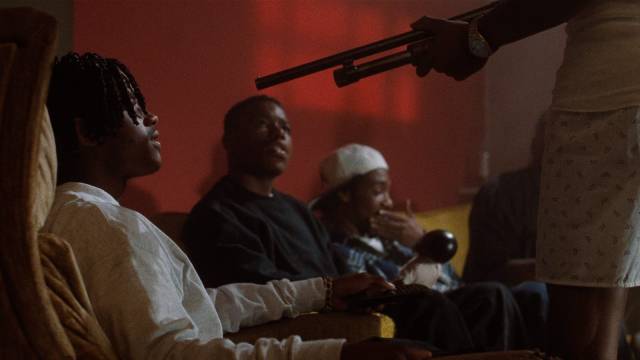 Guns are a constant, casual presence

Menace II Society (1993) is the work of young artists, brash, angry and nihilistic. It is violent and hopeless, yet its style – steeped in the attitudes permeating hip-hop culture – is exhilarating. Cinematographer Lisa Rinzler uses stylized lighting and keeps the camera moving at all times, switching from elaborate Steadicam tracking shots to sharp, jarring hand-held moments. Like its protagonists, the film is driven by a continuous adrenaline rush.

While Singleton’s Boyz n the Hood showed characters looking for ways to get out of the confines of the ghetto, the Hughes Brothers’ movie sees escape as a futile fantasy. In fact, they claimed at the time that Menace II Society was made as a response to Singleton’s more hopeful feature. As Elvis Mitchell comments in one of the extras on Criterion’s new Blu-ray, in some ways the film functions as a horror movie – though the horror is rooted in reality rather than fantasy. 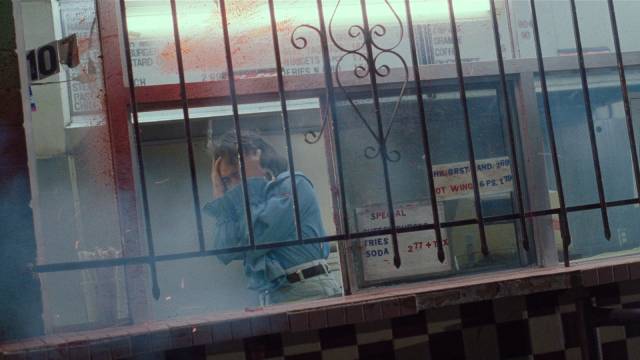 The Hughes Brothers give the audience no time to settle in, immediately creating a destabilizing atmosphere of violence and uncertainty. We meet the two protagonists – Caine (Tyrin Turner) and O-Dog (Larenz Tate) as they enter a convenience store looking for beer. The Korean couple who run the store are nervous, watching the two boys closely, which triggers their anger. The tension builds, but the moment seems to be passing until the store owner makes the mistake of muttering “I feel sorry for your mothers”. O-Dog turns back in a cold rage, shoots the man several times and drags the woman into the back room to retrieve the surveillance tape. Caine desperately tries to urge O-Dog to get out; we hear him kill the woman off-screen, then he saunters back into the store, seemingly high on the moment and in no hurry. He takes money from the till and searches the owner’s pockets for more. Later, he and his friends will watch the tape over and over again for entertainment, laughing at O-Dog’s casual ease with killing. 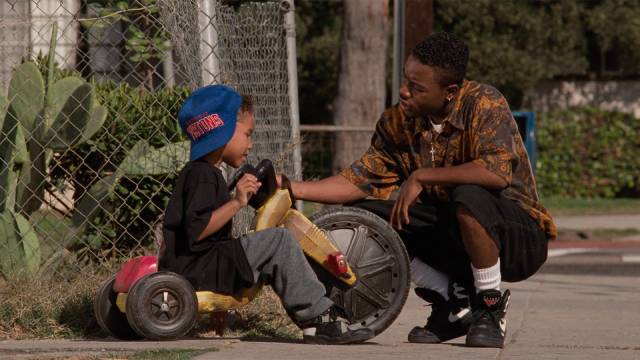 That ease is on display continuously as O-Dog kills people with barely a thought, though always in response to some perceived slight. In fact, all the violence on display seems to be an excessive response to any suggestion of weakness. Although not common currency when the film was made, it’s a devastating display of toxic masculinity. Marginalized, targeted by the police, oppressed by the dominant (white) society, deep-seated feelings of weakness are held at bay with aggressive displays of illusory power which have been learned since childhood. In a flashback, we see Caine watching with a kind of fascination as his father (Samuel L. Jackson) takes offense during a card game and empties a pistol into one of the other players as Caine’s mother shoots up with heroin. 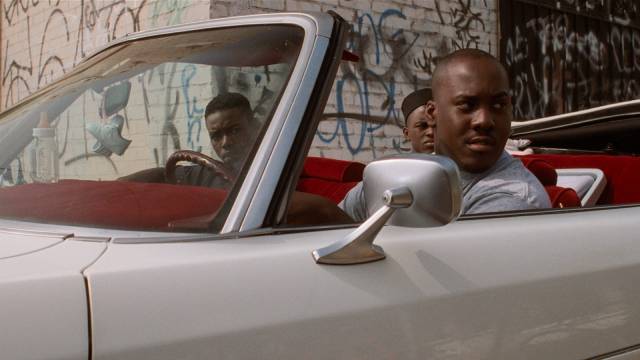 Drugs, crime, prostitution … these are the things by which the people around Caine and O-Dog survive and differences are resolved with beatings and shootings. And yet there is a potential way out for Caine, through his relationship with Ronnie (Jada Pinkett), a young mother who is working to get out of Watts with her son. Caine keeps an eye on her as a favour for the boy’s father who is in prison and he and Ronnie develop a strong emotional connection; when she lands a job in Atlanta, she asks him to go with her. But by then, he has himself been shot and has become a killer – his response to her offer is a fatalistic “why bother?” After all, even if he moves across the country, he’ll still be Black and in this society that means nothing can change for him. 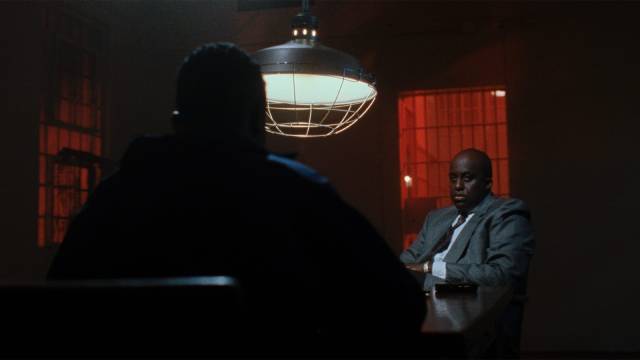 The Hughes Brothers said that they made Menace II Society for white audiences, that their aim was to show why the ghetto was rife with violence, drugs, crime and hopelessness. They succeeded in this, evoking the sheer weight of oppression which breeds the nihilism of boys like Caine and O-Dog. There’s an awareness and a critique embedded in the film, but its style and energy also run the risk of reinforcing widely held stereotypes about Black communities being inherently criminal, that this behaviour is innate rather than the product of social forces which have shaped American society for centuries. It gives a vivid illustration of the situation, but its nihilism implies there’s no solution, that suggestions of a way out – Ronnie’s proposed move, Tre’s escape at the end of Boyz n the Hood – are illusions.

On the level of sheer bravura filmmaking, Menace II Society is a remarkable achievement for twenty-year-old filmmakers. The script by Tyger Williams, just twenty-four when he wrote it, is vivid, packed with nuanced characterizations and finely observed social detail; Rinzler’s cinematography is excellent; and the cast is flawless, with Turner and Tate providing vividly complementary performances – the former given to self-awareness and questioning, the latter immersed in the visceral thrill of violence.

The image on Criterion’s Blu-ray is from a new 4K restoration and looks vibrant, with bright colour and excellent contrast in the many night scenes.

Criterion have provided a strong collection of extras which illuminate the context in which the film was produced and its place in the wave of late-’80s, ’90s Black filmmaking.

New material produced for this release includes comments from Rinzler about a number of specific scenes (21:21), and two very lively and informative conversations moderated by critic Elvis Mitchell – one with Albert Hughes and Tyger Williams (34:08), the other with Allen Hughes and actor/filmmaker Bill Duke, who has a small but vivid role in the film as a police detective (26:09).

The booklet essay is by critic Craig D. Lindsey.