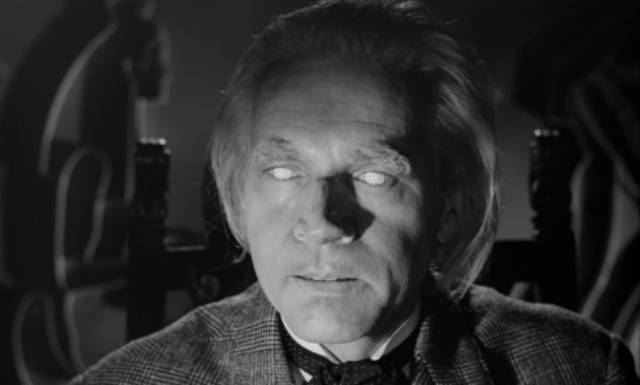 After twenty years of exile in Hollywood, where he made twenty-two features ranging from masterpieces to pot-boilers, Fritz Lang returned to Germany and closed the circle of his career by revisiting in his final three films some of his earliest achievements. Producer Artur Brauner offered his support, desiring to create a bridge between contemporary German filmmaking and the halcyon days of Weimar Cinema. Brauner had begun his incredibly prolific career immediately after the war, eventually making more than three-hundred movies over seventy years (he died in 2019, aged 100). Lang was a key catch in this project, though a lot of critics at the time neither appreciated nor understood the films that resulted from the partnership. 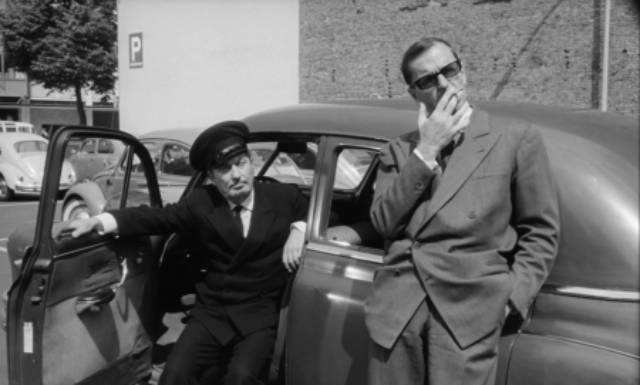 Those films appear on the surface quite old-fashioned, both naive and derivative. Der Tiger von Eschnapur and Das indische Grabmal (both 1959) were an opulent, colourful remake of an epic two-part silent adventure, Das indische Grabmal (1921), which Lang had originally planned to direct, though in the event producer Joe May decided to do the job himself. So this was a late-career opportunity for Lang to complete something left unfinished for almost forty years. Delirious and hallucinogenic, the films seemed problematic in the era of imperial decline when the adventures of white Europeans in exotic other cultures reflected a history and attitudes tainted by arrogance and national crimes. The fantasy version of India presented by the films remains problematic from a historical point of view, yet it’s a visually stunning, deeply romantic evocation of the schoolboy dreams of adventure which underlay the European empires, illuminating the state of mind of those who spread out over the world to assert their power over other cultures. 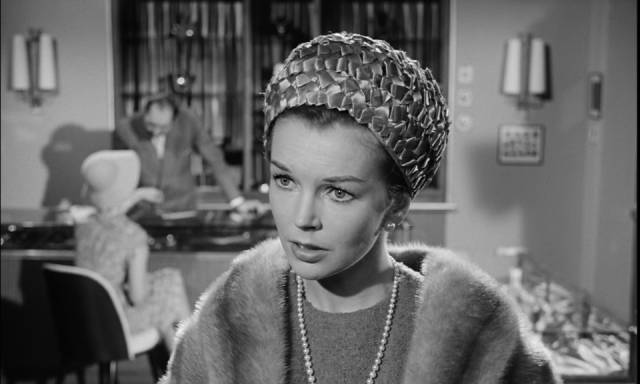 Although these films received a mixed reception, Brauner pressed ahead and finally convinced Lang to revive one of his key creations from the ’20s, the criminal mastermind Dr. Mabuse. First appearing in another two-part epic in 1922, the Doctor returned in 1933, in Lang’s final German film before going into exile when the Nazis took power. In The Testament of Dr. Mabuse, however, the evil genius underwent a significant change – from the embodiment of nihilistic capitalism in the silent films, he became a kind of disembodied spirit of the age, a very dark new age, which infected those susceptible to the lure of power. Released two months after Hitler became Chancellor, the film could easily be read as prescient of what the Fuhrer and the Nazis were about to unleash on Germany. In Lang’s final film, Die 1000 Augen des Dr. Mabuse (The Thousand Eyes of Dr. Mabuse, 1960), this spirit permeates the post-war world, carrying the Nazi infection into modern Germany. 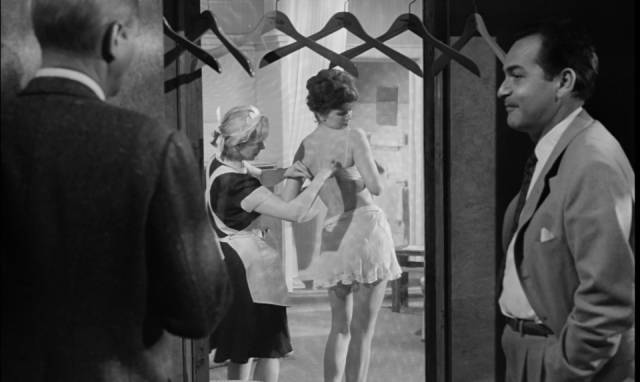 Much of the film takes place in the opulent Hotel Luxor which is fitted throughout with surveillance devices installed by the Nazis during the war to gather intelligence on important people. That equipment is now being used by Mabuse’s heir to blackmail the rich and powerful and also to gather intelligence about international affairs and developments in nuclear technology and weaponry. Among the guests are American industrialist Henry B. Travers (Peter van Eyck), who’s in Berlin to make a deal for a nuclear plant. He becomes involved with Marion Menil (Dawn Addams) when he manages to talk her in from a high ledge; unhappily married to Roberto Menil (Reinhard Holldehoff), an abusive man with a club foot, she turns out to be bait used to lure Travers into Mabuse’s schemes. 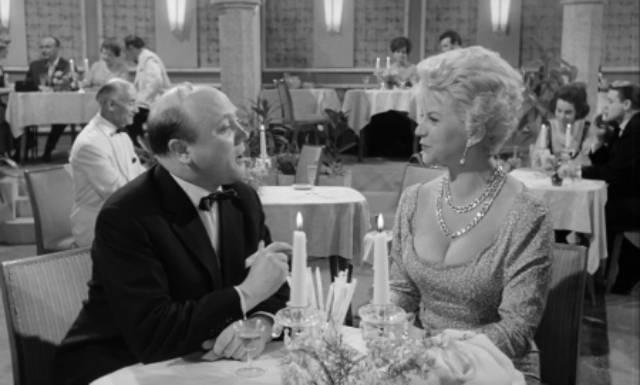 Insurance salesman Hieronymus B. Mistelzweig (Werner Peters) is also not what he seems

But Mabuse isn’t the only one in disguise – Marion isn’t who she first appears to be; the annoyingly prying and chatty insurance salesman Hieronymus B. Mistelzweig (Werner Peters) turns out to be someone else entirely in the climactic moments. We even become suspicious of Travers at times. Perhaps the only main character we have no doubts about is Mabuse’s ruthless assassin, No. 12 (Howard Vernon), who initiates the narrative action by reprising a scene from Das Testament des Dr. Mabuse in which he silently kills a newsman while stopped at a red light using an experimental gun which fires a dart so slender that it barely leaves a visible Mark as it pierces the victim’s brain. 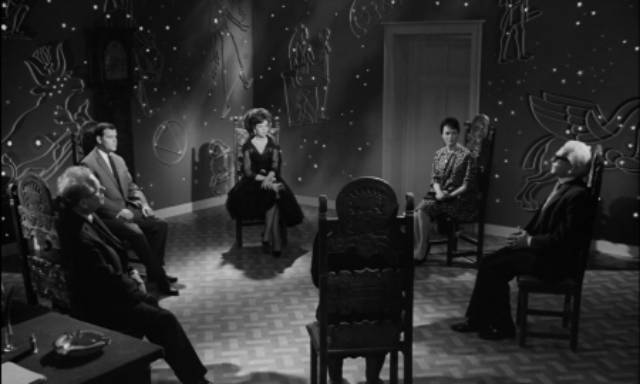 Mabuse himself remains a figure of disruption, his only apparent motive the accumulation of power in order to foment chaos; he brings the Nazis’ fascist impulse into modern Germany, making clear that that impulse has been absorbed rather than banished by the post-war society. The Nazis’ totalitarian methods have been adapted to the Cold War conflict, politics and crime woven together just as they were in the pre-war era, though the stakes are even higher in the nuclear age. 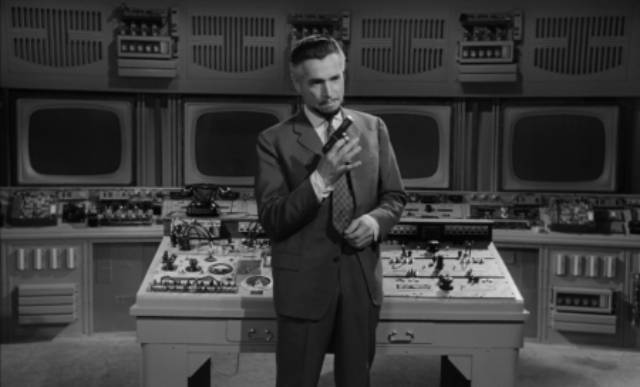 Like the Indian epic, Lang’s final film was dismissed by many critics at the time who saw it as mere low-budget pulp – and indeed it bears a strong resemblance to the krimi thrillers popular at the time (many based on stories by Edgar Wallace, and many more credited to him even when they weren’t). But Lang was using the genre for a deeper critique, just as he had used film noir in Hollywood, and here he was laying the groundwork for a newer genre which quickly developed over the next few years into the high-tech espionage and supervillains of the James Bond franchise and its imitators … incidentally pointing to the roots of that still popular genre in Lang’s own work in the ’20s, not just Mabuse but also Spione (1928), which pretty much invented all the relevant genre tropes.

The Masters of Cinema Blu-ray of The Thousand Eyes of Dr. Mabuse has a crisp, detailed image (though DVDBeaver detects some digital polishing which makes the image smoother than it ought to be). There’s a commentary by Mabuse expert David Kalat (I’m not sure if this is the one he recorded for the All Day Entertainment DVD in 2000, or a new, updated one), plus the 2002 interview with actor Wolfgang Preiss which was on an earlier MoC DVD edition, as well as a brief alternate ending from the French theatrical release. 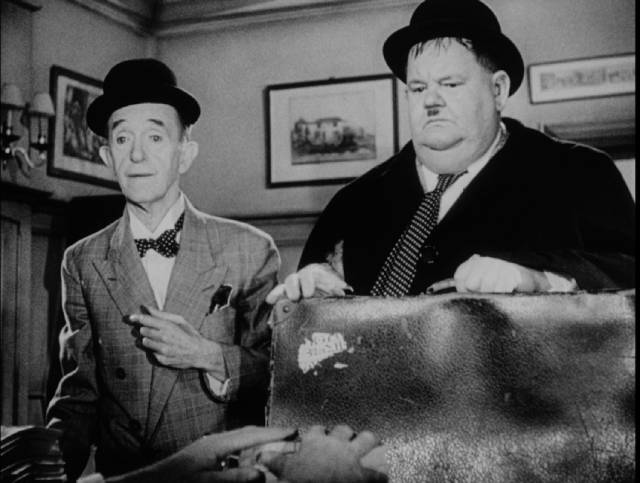 Although Stan Laurel and Oliver Hardy both entered the movie business in the teens, they didn’t become the indelible, inseparable comedy duo we know until Hal Roach teamed them up in the mid-’20s. They quickly became and remained beloved by audiences. Charlie Chaplin and Buster Keaton were formidable artists, their comedy monuments to their single-minded genius, but the Boys were all warmth and charm. Big, blustery Ollie and thin, emotionally fragile Stanley complemented one another both physically and temperamentally. Unlike many silent stars, their chemistry worked just as well if not better with the coming of sound, their verbal comedy adding to their appeal. 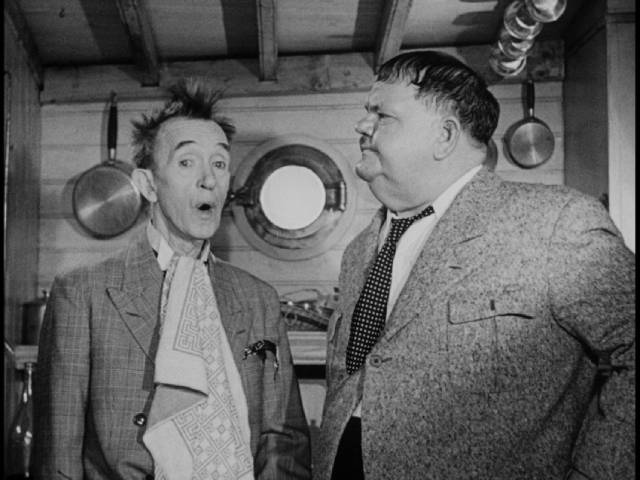 Nothing goes right on board Stan’s inherited yacht

They made a lot of features and shorts up through the Second World War, but then their screen career abruptly ended. They were getting older and times were rapidly changing; shifting audience tastes had shunted them into the wings … but they remained hugely popular in England and Europe, particularly France, and they had a number of successful tours over there in the late ’40s. It was the French who pitched the idea of a new movie and Stan and Ollie were more than willing to get back to the screen. But it wasn’t easy.

The production of Atoll K (aka Utopia, 1951) dragged on for eight months, from August 1950 to the end of March 1951. Multiple writers were involved in the script and the work of nominal director Leo Joannon was supplemented by at least three others, including Tim Whelan, whose three-decade career from the end of the silent era to the mid-’50s included work on The Thief of Bagdad (1940), and Alfred J. Goulding, whose four-decade career included more than a hundred silents, including many for Hal Roach and Mack Sennett, plus Laurel and Hardy’s feature A Chump at Oxford (1939). Considering the circumstances, it’s not surprising that Atoll K has a chaotic, cobbled-together feel. 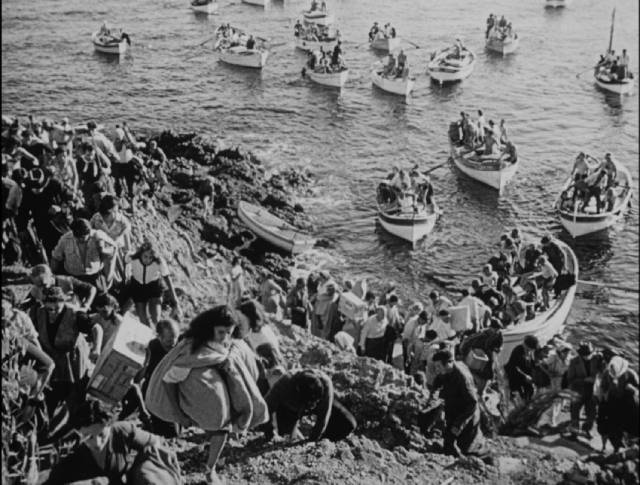 It’s also not surprising that many of Stan and Ollie’s fans find the movie to some degree distressing because Laurel was in poor health at the time and looks positively skeletal. And yet, despite his frailty, he tackles his role with obvious commitment and the verbal and physical gags still have the familiar qualities the pair brought to all their work together. There’s a genuine charm to their rapport, even after twenty-five years playing the same roles, though a viewer can’t help but be a bit nervous about the risk of them injuring themselves with the slapstick and pratfalls.

While the film is laced with familiar comic bits, it has a larger more ambitious framework which toys with political satire … an interesting if not entirely successful attempt to expand the team’s repertoire. It begins in a lawyer’s office where they’ve arrived to claim Stan’s inheritance from a rich relative. Unfortunately, all the cash is taken for taxes and legal fees, leaving only a yacht and a small Pacific island. Better than nothing, they embark on a voyage accompanied by a stateless man, Antoine (Max Elloy), and – unknown to them, a stowaway, Giovanni (Adriano Rimoldi). After a series of mishaps and confusions, they’re shipwrecked on a small island which has just emerged from the sea and set about establishing themselves like Robinson Crusoe – in fact, they name their island Crusoeland after Defoe’s character. They’re soon joined by singer Cherie Lamour (Suzy Delair), who is stranded after arguing with her fiance, naval lieutenant Jack Frazer (Luigi Tosi). 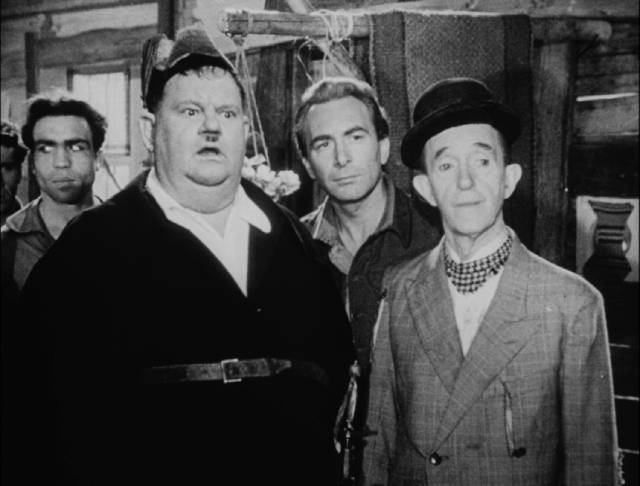 They draft a constitution which specifies no taxes, no laws and no restrictions on immigration. When word gets out, people from around the world flock to the island in search of an open society which will allow them to live in peace. Naturally, it also attracts schemers and opportunists, criminal gangs that start to take control and exploit the new citizens. Eventually, Stan, Ollie, Antoine, Giovanni and Suzy are deemed enemies of the state, tried and sentenced to death. Meanwhile, uranium has been discovered and various nations try to lay claim to the island, with Lt. Frazer sent to survey the deposits.

As chaos spreads, with the Boys trying to avoid being hanged, the island abruptly sinks back into the sea. In a coda, they finally land on the island Stan inherited, only to have their few remaining possessions confiscated for unpaid taxes.

Atoll K sprawls and stumbles and sometimes loses sight of Stan and Ollie, but when they’re on-screen they’re still funny and endearing; the film might be a mess, but it’s nonetheless an honourable cap to the pair’s long and entertaining partnership. 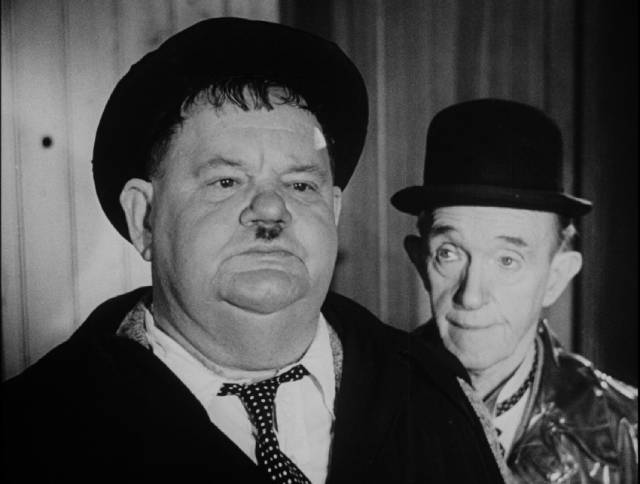 Stan and Ollie, at 60, sustain the comic relationship forged in the mid-1920s

The BFI Blu-ray presents the longest known version of Atoll K (98 minutes) which was scanned in 2K from a fine-grained positive held by the National Archive. The results are uneven and the source is obviously somewhat battered; it’s one of those cases where we need to be grateful that it exists at all. The disk is almost overstuffed with extras, beginning with a commentary by Laurel and Hardy expert Glenn Mitchell and a video essay about the making of the film by Chris Seguin. There are a selection of silent films featuring Stan and Ollie before they teamed up and a number of newsreel and amateur clips from various visits to England in the ’30s and ’40s, showing just how popular they were as crowds gathered for a chance to see them in person. There’s also an 80-minute audio interview with Laurel recorded a week after Hardy’s death in 1957, and a booklet with essays and notes on all the material on the disk.