Among the papers I recently found stuffed into boxes in my mother’s basement were a few interesting film-related items – the first two below are fairly trivial, the rest personally significant as reminders of paths not taken.

There were several copies of a short-lived newsletter-style magazine put out by the Winnipeg Film Group in the early ’90s. I found a review I’d written of Francis Ford Coppola’s Dracula in 1993; hard to believe I used to be so opinionated!

And in the November 1992 issue there was a note about my trip to the Toronto International Film Festival, where The Exquisite Corpse, a group project I’d made with ten other directors, was screened in a shorts program that year. 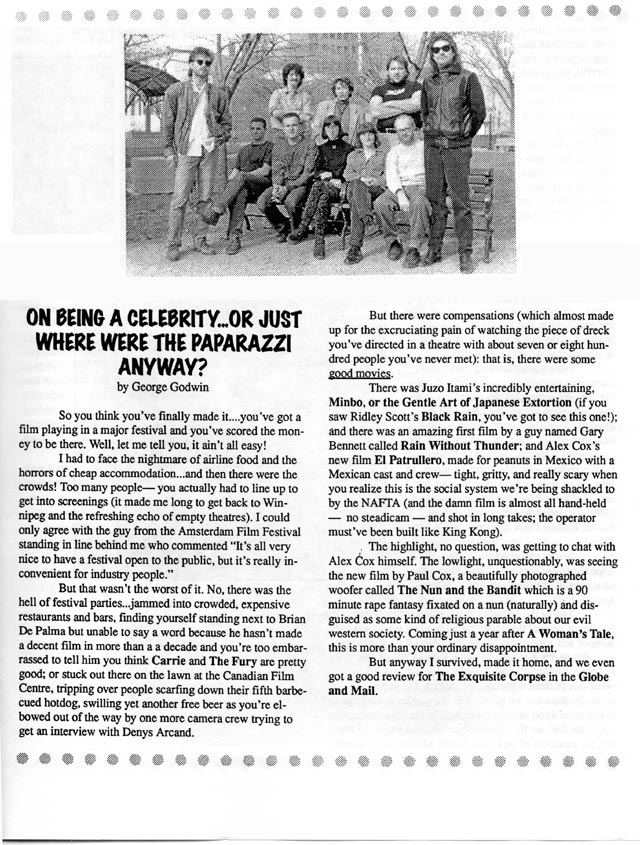 I also found a brief letter and a friendly postcard from Kyle MacLachlan – the latter interesting as it was written during the limbo between working on Dune and the release of the film. He hadn’t found any other film work at that time and mentioned that he “had to turn down BLUE VELVET (a David L. script) because it was too violent for me to feel good about”.

And there was a letter from Jack Nance. Jack and I had become friends during the Dune shoot and for several years after had tried to get a couple of projects off the ground. One was a script I wrote specially for him; the other was a pet project he had been nursing for a number of years. He was fascinated by a Texas gangster named Herbert Noble, known as “the Cat” because he survived so many attempts on his life. To acquaint me with Noble’s story, Jack sent me a cassette tape of him reading a bunch of newspaper reports about Noble and the other gangsters he’d been involved with (Benny Binion et al.) and the letter I just found had accompanied that tape.

Dear George
Enclosed is a tape of newspaper accounts of the story of Herbert Noble. On side one I’m reading as best I can from micro-film copies of the articles. As you can tell by listening it’s difficult. But it’s possible to piece things together from these accounts and my own personal conversations with some of the people involved.
Side two is a bunch of gibberish. There is a big gap at the beginning, some more media accounts and a drunken diatribe after I read “The Green Felt Jungle” by Ovid Demaris.
Please listen to side one carefully several times. I can probably fill in the blanks or answer any questions about the whole incident.
I think it could be a great movie with lots of color and I hope you’ll feel inclined to participate in the venture.
Anything you could do to put any of this on paper, George, would be much appreciated. And, I believe, greatly worthwhile.
It was good to see you in L.A. I’m a great admirer of yours, my friend, and I hope, perhaps, we can do something with
(OVER)

this that could benefit us both.
The Noble story, as you know, has been a great aspiration of mine for some time. But I’ve been reluctant to share it with many people for obvious reasons, chief among them being there is no statute of limitations on murder! People get edgy about that.
Please, George, don’t let the tape get out of your hands. It’s the only one and there are no copies.
You’re a great friend, a talented writer and a trusted confidant. I hope we can develop something good from this.
I’m hoping you’re having a great time in England. Be in touch. Let me know what you think of this whole project and send me anything you come up with.
Hope to see you soon (in Dallas??)
Luv ya guy!
Jack

While I was on my post-Dune trip to England and Europe in 1984, I reconnected with another friend I’d made on the production. Maggie Anderson was a wonderful Scot who had been a dialect coach on the shoot, trying to smooth out some of the radical differences in accent among the multinational cast. I saw her quite frequently in London in the Winter and Spring of 1984. She liked to have people over for dinner. There was an enjoyable evening at her flat with me and John Dykstra as guests: he had been the original effects supervisor on Dune before budgetary differences with De Laurentiis caused him to withdraw, and he was in London to supervise effects for Tobe Hooper’s Lifeforce.

But there was an even more interesting evening in which I was introduced to Princess Elizabeth of Toro, whom Maggie had met while working on John Guillermin’s Sheena in Kenya, in which Princess Elizabeth had played the part of a shaman. A strikingly beautiful and very regal figure, she was a lawyer, diplomat, model and actress, who had just recently published an autobiography and was interested in seeing her story made into a movie. Maggie brought us together to see if we might hit it off and collaborate on an adaptation. 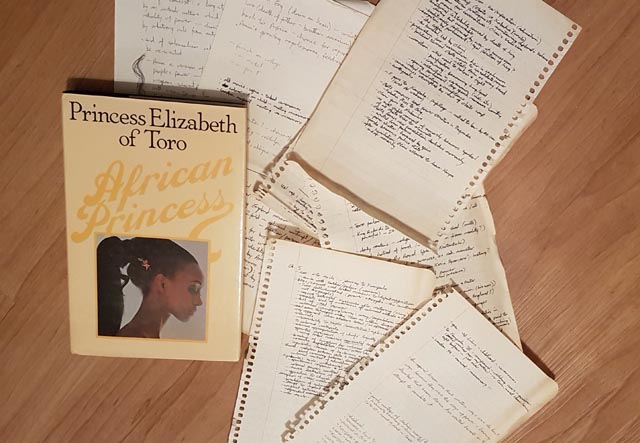 The book was quite fascinating – her childhood as tribal royalty in Uganda, her impressive development as a student (she became the first East African woman called to the English bar) and perhaps most importantly, from a dramatic point of view, her ten-month tenure as minister of foreign affairs for Idi Amin in 1974. While recognizing this latter as a problematic episode in her life, combined with her own background it afforded an interesting perspective on the evolution of post-colonial African society and politics. I made extensive notes based on my reading of the book, but again (as with the projects involving Jack) it ultimately led nowhere. 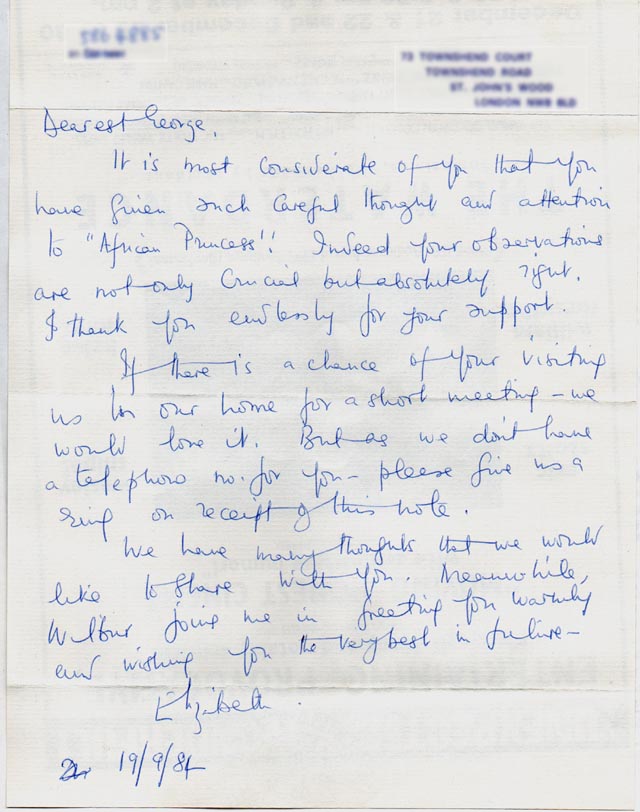 Letter from Princess Elizabeth of Toro

Dearest George,
It is most considerate of you that you have given such careful thought and attention to “African Princess”. Indeed your observations are not only crucial but absolutely right. I thank you endlessly for your support.
If there is a chance of your visiting us in our home for a short meeting – we would love it. But as we don’t have a telephone no. for you – please give us a ring on receipt of this note.
We have many thoughts that we would like to share with you. Meanwhile, Wilbur joins me in greeting you warmly and wishing for the very best in future.
Elizabeth
19/9/84

I have no doubt that these failures were due to my own inexperience and timidity as much as, or perhaps more so than, to outside forces. The Noble and Princess Elizabeth scripts were never written, and the script I did write for Jack stalled after a bizarre meeting we had in Las Vegas with a representative of Oklahoma oilmen.

I eventually lost touch with both Jack and Maggie and embarked on my own career as a film editor back in Winnipeg, largely specializing in documentary.

It’s an odd feeling, coming across all this stuff at once. It almost makes it seem like I’ve had an interesting life!