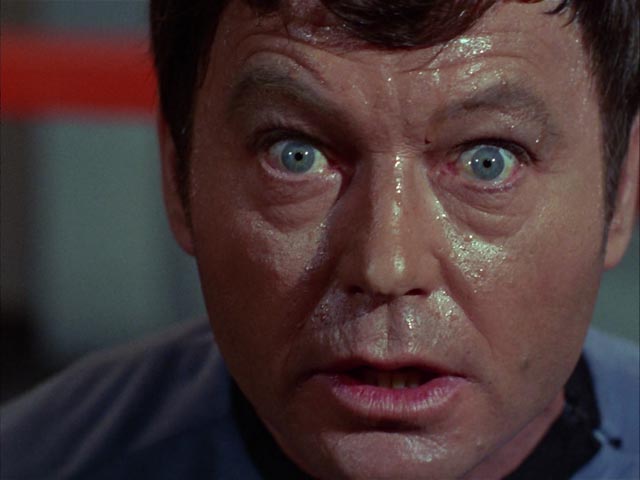 Dr. McCoy (DeForest Kelly) loses it in The City on the Edge of Forever, Star Trek Season One

As I mentioned last week, I’ve started working through the original Star Trek series on Blu-ray. I just finished watching season one and was pleased to discover how entertaining the show still is, despite the shortcomings I’ve already pointed out. At its best, the show exhibits strong storytelling. Unlike what we’re more used to now, there were no season-long story arcs; it was more of an anthology show with a small group of regular characters encountering new guest characters every week. The big advantage of this was the ability to come up with fresh ideas almost every week without settling into tedious repetition (does anybody really care any more about the alien conspiracy crap that eventually made The X-Files unwatchable?). The big disadvantage was the format’s inability to accommodate character development; one week someone would go through some massive trauma which ought to have changed them deeply, only to have them back the next week with no apparent lasting impact. Perhaps the prime example of this is Harlan Ellison’s celebrated episode The City on the Edge of Forever, in which Kirk must allow the woman he loves to die in front of him because saving her will irrevocably, and catastrophically, change the future. And yet the next week, he’s just carrying on as usual.

By the way, having also recently been dipping into Ellison’s 1989 collection of film criticism, Harlan Ellison’s Watching, in which he rants and puffs and bloviates in his inimitable, rampantly egotistical manner, smacking down all who disagree with him, I might point out that for someone who prides himself on his deep knowledge of movies and writing, he does make one glaring error in the script of City: the story is set in 1930 and Edith Keeler (Joan Collins) enthusiastically urges Kirk to take her to the “new Clark Gable movie” showing locally. The problem here is, in 1930 Gable was a bit player, still taking occasionally uncredited parts; it wasn’t until 1931 that he began to get lead roles and a couple of years more before he started looking like a star – so it’s very unlikely that Edith would be smitten by him in 1930. 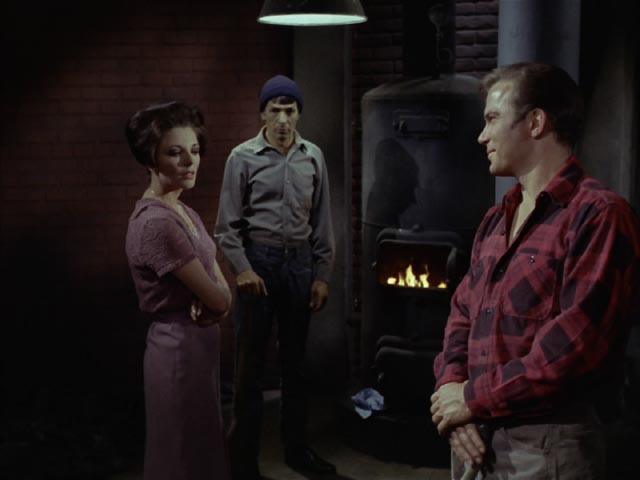 Still, the best shows really hold up, including of course Space Seed, the famous debut of the character Khan (so misused in the tedious recent reboot sequel). After the clumsy relaunch of the series theatrically with Robert Wise’s snooze-fest Star Trek: The Motion Picture, it was probably very logical that Roddenberry and company went back to this episode for the second big screen feature, a brilliant way to tie the movies to the beloved series, giving Star Trek a firm anchor point from which to expand.

One of the series’ primary tropes is the conflict between reason and emotion, chiefly embodied in their extremes by the characters of Spock and Bones McCoy, with Kirk the bridge which binds the two together. Again and again, the stories return to the essential need to balance these extremes. Too much emotion results in violence; too much reliance on pure reason also results in violence. The problem in the end is that even in balance, given human nature, you tend to end up with violence. Given the ostensibly pacifist intentions of Roddenberry, it shouldn’t be forgotten that his exploration vessel is also a warship equipped with powerful weapons which tend to get used at some point in almost every episode. Though the militaristic tendencies are occasionally interrogated, the series overall has a mid-century certainty that the Federation and its representatives are definitely on the side of right. We are the good guys, they are the war-mongers, and sometimes it’s entirely justified to blow things up.

One of the consequences of watching as much as I do is a tendency to see connections and patterns everywhere. I was struck while watching the late season one episode The Return of the Archons – about a society rigidly ruled through the suppression of primitive emotions which must regularly be released through the wanton violence of “Festival”, a night during which everyone is expected to run wild and rape and pillage before order is reimposed at dawn – by the similarities to James DeMonaco’s The Purge (2013) and its sequels (2014, 2016).

I had actually avoided the first movie when it appeared because the trailers made it look like just another dumb excuse for a bout of nihilistic violence. But I became interested after reading some reviews of the third movie when it came out this past summer, reviews which suggested there was some intelligence behind what had appeared to be a mere gimmick. So I got hold of the first two on disk and discovered that they are indeed smartly written and efficiently directed by DeMonaco. While the Star Trek episode allegorizes the issue, The Purge situates it firmly in a recognizable almost-present, a United States of deep economic divisions and an almost complete absence of empathy. Faced with social tensions, the New Founding Fathers have established an order in which those tensions are given release for one night every year, when all citizens are free to commit whatever crimes they want in exchange for behaving well the rest of the year.

James Sandin (Ethan Hawke) and his family live in a gated community, most of the inhabitants of which have purchased high-tech security systems from him, making him very wealthy. On the night of this year’s purge, Sandin finds his own house targeted by a cheerful group of mask-wearing killers who turn out to be his own resentful neighbours who feel he’s taken advantage of them for his own personal profit. While the film makes clear the economic divisions between those at the top and the bottom, its satirical barbs are aimed at the micro-resentments among those at the upper end of the spectrum, who gauge their own position against their neighbours through increasingly small signs of status.

DeMonaco sets his themes within a tense and well-constructed siege narrative, with tensions emerging within Sandin’s family even as they have to work together to survive against the assault from outside. 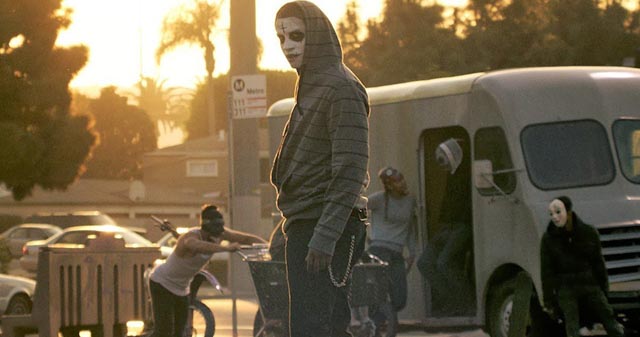 Predatory gangs kidnap and sell victims in The Purge: Anarchy (2014)

The first sequel, The Purge: Anarchy, expands on the concept, enlarging the canvas by following a small group of people stranded out in the city on purge night, fighting to survive. DeMonaco brings in a couple of interesting new elements, such as wealthy people who “buy” victims to be slaughtered in their clubs, promising to pay large sums of money to those victims’ families, a graphic metaphor for the virtually cannibalistic exploitation of the poor by the rich in a society devoted purely to the tenets of capitalism; and the discovery that the government, concerned that not enough people are taking part in the purge to keep it an effective method of social control, sends out paramilitary units to stir things up, handily targeting supposed trouble-makers.

There are also gangs which kidnap people to sell to those clubs and a rising revolutionary force determined to bring the slaughter to an end.

I haven’t yet seen the third movie, The Purge: Election Year, but apparently it takes an even more expansive view, focusing on the current state of American politics and the ways in which social groups are wielded by candidates against one another in order to gain power at the people’s expense. DeMonaco seems to have found a handy vehicle to highlight the absurdities of contemporary politics and the increasingly disturbing arming of a civil society succumbing to fear and paranoia. 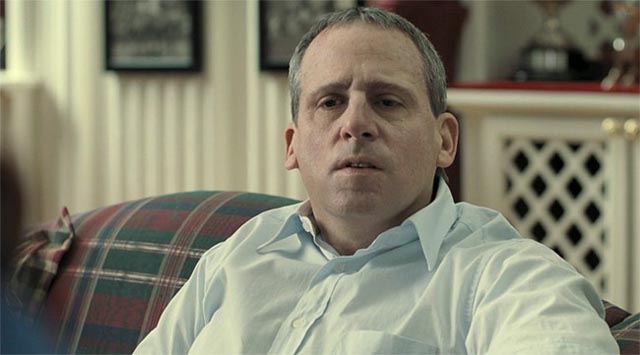 Issues of class and violence are also the focus of Bennett Miller’s Foxcatcher (2014), which I finally watched after repeated urging by a friend. The subject hadn’t interested me much and as I hadn’t liked Miller’s Capote (2005), I simply hadn’t bothered to check it out before. The film has a kind of queasy fascination as it follows a strangely pathological relationship between a somewhat dumb athlete and the scion of a long established wealthy family who has obviously grown up inside a bubble of privilege which has kept him totally separated from reality. But for me even if something is “based on real events”, there needs to be a larger reason for telling the story than that it just actually happened. By the end of Foxcatcher, I wasn’t sure why Miller had made it beyond being fascinated by the idea of privilege as pathology. The film’s ending comes as a kind of perfunctory letdown.

What I did get from it was a certainty that Miller is obsessed with capital-A “Acting”, although here Steve Carell’s creepy John du Pont is far more entertaining than Phillip Seymour Hoffman’s irritatingly mannered and unconvincing Truman Capote in the earlier film (a performance about which I seem to have a minority opinion, as Hoffman was widely praised by critics; Toby Jones was far more convincing, and much less of a show-boater in Douglas McGrath’s Infamous). 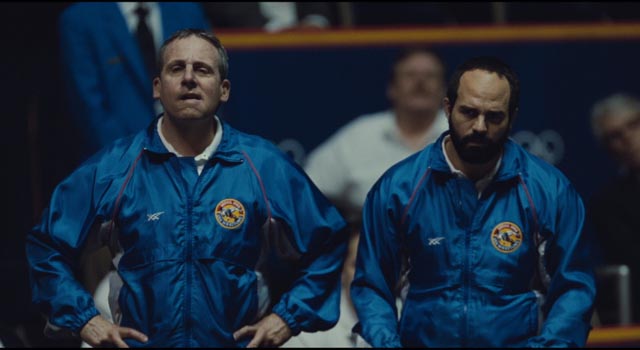 Truth is, I have a kind of aversion to acting which seems to be all about itself, about displaying the actor’s craft rather than conveying a character within a particular story. This is why I’ve never understood the reverence shown for Daniel Day-Lewis’s rare appearances; to me, he seems like a colossal ham. As Bill the Butcher in Scorsese’s Gangs of New York you fear for his health as he devours the scenery with a gluttonous fury; and in There Will Be Blood his broad parody of John Huston in Chinatown is so tediously distracting that it’s impossible for the movie ever to take dramatic shape around him.

I haven’t seen Moneyball, but judging by Capote and Foxcatcher, Miller seems more interested in creating larger-than-life caricatures than genuine characters, a penchant for playacting which mitigates against the darkness of the stories he’s chosen to tell. That taste for actorly excess might be better suited to his announced next project, yet another adaptation of Dickens’s A Christmas Carol; the allegorical extremes of Scrooge, Bob Cratchit, Tiny Tim and the Christmas ghosts might bear the strain of big acting better than a realistic drama.