A few days after watching Zack Snyder’s dissatisfying remake of Dawn of the Dead (2004), a copy of Howard J. and Jon Ford’s The Dead (2010) arrived from England. This small film made by an English director in West Africa reminded me that I prefer my zombies low budget and slow moving.

But why, I wonder, do I continue to enjoy this genre? Surely there’s nothing new here, we’ve seen it all before … 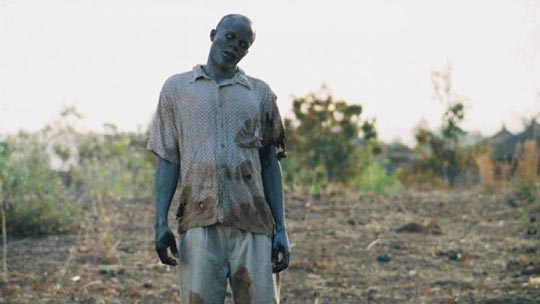 While I can enjoy a “traditional” zombie movie – those rooted in voodoo (or the pop culture version of voodoo), poor people cursed to a mindless existence, usually as slave workers (Victor Halperin’s classic White Zombie [1932], Jacques Tourneur’s quietly poetic I Walked With a Zombie [1943], John Gilling’s Plague of the Zombies [1966]) – the genre that draws me is the one invented by George Romero and John Russo in 1968’s Night of the Living Dead. These walking dead aren’t created by human agency, but by some inexorable natural force – radiation, viral plague …

In the traditional “voodoo” zombie story the dead are pathetic creatures who have been stripped of will and consciousness by another human being. In the post-Romero story, the dead are simply dead. Not un-dead like vampires (who have been so tediously romanticized in pop culture, stripped of their demonic force), but literally ambient rotting corpses.

The metaphorical drive of this genre is overt, crudely blatant even, but none the less effective for that. The zombie film is about confronting our own mortality. We know we’re going to die, yet we fight as hard as we can to stave off the inevitable. No wonder the genre has an overriding apocalyptic tone … there really is no escape from our fate beyond a temporary reprieve, a fate which is brutal and ugly when you stare in its ravenous face.

In The Dead, an overloaded plane tries to escape from the chaos in an African country, but it plunges into the sea just off the coast. A lone survivor, American engineer Brian Murphy, makes it to shore, manages to salvage a couple of weapons from the debris and barely escapes the gathering crowd of the dead who surround him. After a while of wandering across an arid, infested landscape he finds an old vehicle which he manages to get running. Trying to get the small truck out of a sandy rut where it bogs down, he’s almost overrun by the dead, saved at the last moment by the arrival of a soldier, Sergeant Daniel Dembele, who has disobeyed orders and is heading north in search of his young son who managed to escape when his village was completely destroyed by the dead. 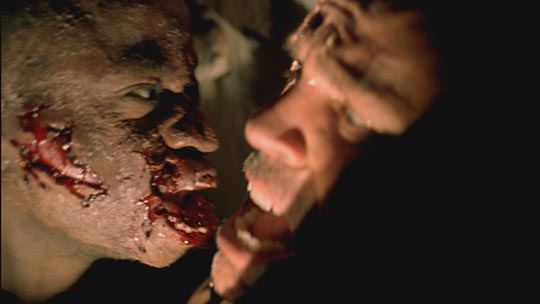 The Dead is a modest road movie about the uneasy bond which develops between the two men as they pass through a desolate, dying world on the way to a fate that can only be delayed, not avoided. The performances are generally effective (Rob Freeman as the ordinary, unheroic Murphy; Prince David Osei as Dembele); Jon Ford’s photography captures the landscapes and the moments of violence in an almost elegantly classical way rather than using the now more familiar shaky-cam technique (in this, it bears some resemblance to Romero’s more classically styled Survival of the Dead [2008]). Rather than pumping up the sense of chaos which most films in the genre go for, The Dead is suffused with a kind of weary resignation … Murphy and Dembele do what they can to survive, but they know that living is a temporary thing.

The region 2 DVD provides some interesting background to the film, the behind-the-scenes material showing the Ford brothers overcoming some pretty daunting odds to get it made. Between directing crowds of extras through interpreters, facing harassment and corruption on the part of customs officials and police, not to mention cast and crew coming down with malaria, it’s remarkable how smoothly the film plays.

It’s the freshness of the setting and that quiet tone which lend The Dead some distinction. But I also like the harsher, cruder ambiance of films like Marc Price’s Colin (2008); Kevin Gates and Michael Bartlett’s The Zombie Diaries (2006); Yann Demange’s Dead Set (2008), a mash-up of Big Brother and the walking dead; Eduardo Sanchez’s minor Seventh Moon (2008), with its unusual setting in rural China; Jim Mickle’s grim, somewhat slicker Stake Land (2010), which is basically The Road with zombies; even Stephen C. Miller’s Automaton Transfusion (2006), which with its lack of an ending feels as if the director simply ran out of money part way through, has its effective moments. And, of course, I’ll happily watch anything by Romero that touches on the mythology he’s been exploring since 1968.