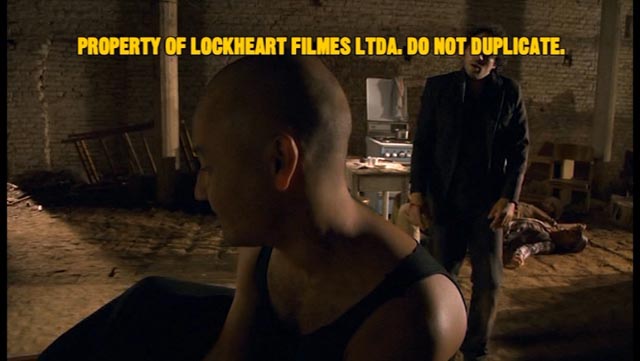 Who wants to watch this?

Entertainment industries are probably never going to get over their paranoia about piracy because ever-evolving technologies will simply produce new ways for people to steal their stuff. As annoying as it is, we’ve had to get used to those annoying warnings at the start of every DVD and Blu-ray (often impossible to skip), essentially accusing everybody – including legitimate purchasers – of being crooks. What other industry tells its customers that the seller totally distrusts them and would like to send them to jail?

But sometimes this gets even more annoying. As I write reviews frequently for this blog, I’ve been getting an increasing number of enquiries from distributors asking me to review their releases. A lot of these are of no interest to me and I ignore them. But occasionally something strikes a chord and I ask for a review copy. This happened recently with what looked like an interesting genre release. But when the disk arrived in the mail, the first thing I saw when I put it in my player was a large, prominent watermark across the upper quarter of the image pointing out that this was the distributor’s property and telling me “Do not duplicate”.

So here’s a company looking for some free promotion from me, while at the same time telling me that they don’t trust me with their product. This watermark pops up for 20 seconds every few minutes, an annoying distraction which made it impossible for me to watch the movie. I sent an email to the company explaining that because of this I wouldn’t be writing a review, that this kind of distraction prevented any kind of fair evaluation of the movie – and is, really, a disservice to the filmmaker. Who would want someone watching their hard work with this implied threat being made repeatedly to the person you’d like to have say nice things about your movie?

I received an extremely brief, seemingly sarcastic response from the distributor which didn’t address what I felt was a perfectly legitimate concern for the filmmaker’s interests. Essentially, I was mocked for bringing it up.

I wonder whether we’ll ever get back to a point where the industry doesn’t consider its customers – and its unpaid publicists – its biggest enemies.