I do occasionally watch recent releases as well as older movies newly released on disk. Although there’s a part of me which feels a pang of conscience about seeing a new release at home rather than in a theatre, the state of theatrical exhibition too often leaves me in a sour mood and I can’t work up the effort to get off my couch and go out. Even if a new movie interests me, I often wait for the disk; and oddly, in recent years I’ve found myself watching – and liking – movies on disk which I initially had little interest in seeing when they first came out in theatres.

Case in point: Rush (2013), the most recent film from Ron Howard. For a long time, it was hard to take Howard seriously as a director. The image of Opie (The Andy Griffith Show) and Richie Cunningham (Happy Days) didn’t suggest much grit and many of his movies were forgettable mainstream product without much of a directorial personality. There was a middle-class, middle-brow flavour which made most of his movies dull if earnest. That shifted dramatically with the release of Frost/Nixon (2008), which I finally watched a few years ago at the urging of a friend; there was a maturity, a political and social awareness, to the film which hadn’t been apparent before. Although his next feature, Angels and Demons (2009), is pure pulp, Howard seemed to take the criticisms of his previous Dan Brown adaptation, The Da Vinci Code (2006), to heart; where that movie had been incredibly turgid and dull, taking itself (and its revisionist history) ridiculously seriously, the sequel was a highly polished, breathlessly paced thriller which embraced its nonsense-filled plot without reservation, becoming one of the most entertaining movies of the year. Then last year, he returned to a fact-based story (written by Frost/Nixon‘s Peter Morgan) about another pair of highly public figures involved in an intense personal and professional rivalry. But instead of politics and history, Rush deals with two of the world’s top Formula One drivers and their competitive relationship during the 1976 racing season. Inevitably, the film contains many familiar elements of the sports genre, but Morgan’s script once again focuses closely on the two characters – England’s playboy racer James Hunt (Chris Hemsworth) and Austria’s obsessive Niki Lauda (Daniel Bruhl), who was completely devoid of any interest in making himself likeable. Personally, I don’t have much interest in sports in general, let alone Formula One, but I found Rush intensely involving, dynamically directed by Howard and shot by the innovative cinematographer Anthony Dod Mantle, and superbly performed by Hemsworth and Bruhl. It’s the mark of a good film that it can sustain interest and excite the viewer even when there’s no prior interest in the subject. Howard scores solidly with this one. 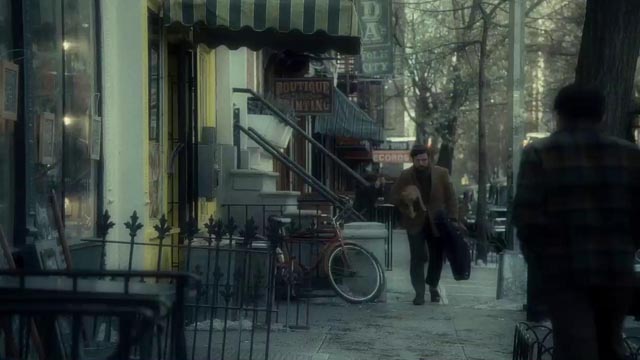 Despair of the talentless: Oscar Isaac and the cat in the Coen Brothers’ Inside Llewyn Davis (2013)

I didn’t go to see Inside Llewyn Davis (2013) because I often find the Coen brothers’ work irritating; there’s a smart-ass tone and too often a strong note of condescension towards the characters which gives their movies a sour taste to me. Of their previous fifteen features, I can say I only really like five (Blood Simple, Miller’s Crossing, The Big Lebowski, The Man Who Wasn’t There and True Grit – well, five-and-a-half if you count the first half of Barton Fink), so my lack of interest in their work combined with a lack of interest in the subject matter (the New York folk scene in the early ’60s) gave me no incentive to go and see the new movie when it came out. Then there were the wildly varied reactions to the film from a number of friends – some hated it, some loved it, and these responses didn’t seem to have anything to do with how they felt about previous Coen movies. So why did I take the time to watch it on disk? I’m not really sure … but I ended up really liking it. Which is odd because there’s not a lot going on, other than spending a few days in the company of a depressed, not very appealing character (Oscar Isaac) during a bleak winter as his hoped-for career as a musician collapses around him – largely because of his own personality and the fact that he only possesses a mediocre talent (a point perhaps a bit too emphatically driven home with the introduction of a new kid at the club where Llewyn has performed: seen only in silhouette in the background, the figure of Bob Dylan is iconically recognizable). The film avoids the cartoonish elements which are too often present in the Coens’ work, hewing to a quiet, low-key approach which sketches Llewyn’s character through an accumulation of small, telling details. While the supporting cast is excellent, the film stands on the strength of Isaac’s performance – the actor also performs all his musical numbers live for the camera, and does a very convincing job as someone with ability but only limited talent (this is not a story of talentless ambition like Ulu Grosbard’s bitter Georgia [1995], in which it’s painful to watch Jennifer Jason Leigh suffer through horrible performances). Inside Llewyn Davis is about Llewyn’s gradual recognition and acceptance of his own ordinariness and the Coens treat him with sympathy and respect.

Life bringing you down? Get a gun: Christian Bale in Out of the Furnace (2013)

I didn’t see Scott Cooper’s first feature, Crazy Heart (2009) – which starred Coen favourite Jeff Bridges – but I took a chance on his second, Out of the Furnace (2013), because of the presence of Christian Bale, always an interesting actor and even more so since his remarkable performance in David O. Russell’s American Hustle. The core story of Furnace is a pretty standard action/revenge narrative – steelworker Russell Baze (Bale) sets out to bring down the scuzzy criminal, Harlan DeGroat (Woody Harrelson), responsible for the death of Russell’s brother. Rodney Baze (Casey Affleck) is an Iraq vet who’s been unable to reintegrate into his working class community and, heavily in debt from gambling, gets into a vicious underground bare-knuckle fighting community. Cooper isn’t interested in the mechanics of his genre, but rather aims to create a working class tragedy about the bleak hopelessness of America in the wake of wars and economic collapse. So the film offers none of the satisfactions typical of a story like this; but all the generic elements undermine much of the apparently serious intent. The director aims to be better and more serious than, say, Walking Tall, but the criminal sub-culture is so heavily caricatured that it’s hard to take the story seriously. Cinematographer Masanobu Takayanagi gives the film a rich, atmospheric surface (the ravaged urban-industrial landscape says more than the entire script) and the cast deliver their characters with some intensity, but the movie is pinned down by Cooper’s pretension and at the end the viewer is left wondering “so what?”

In the Fog (2012), by Belarussian director Sergei Loznitsa, is a film I’ve had no opportunity to see in a theatre, although I wish I had. A long, sombre drama of complex moral ironies, its forest landscapes and haunted faces would benefit from the big screen, but it’s nonetheless impressive on region B Blu-ray. In Belarus, 1942, rail worker Shushenya (Vladimir Svirskiy) is taken from his small cottage and his wife and son, by old friend Burov (Vladislav Abashin), a partisan sent to execute Shushenya, who is believed to have betrayed fellow workers to the Nazis. As these two men, accompanied by another partisan, Voitik (Sergei Kolesov), make their way through the woods at night, we gradually learn about each of them and the complicated, compromised lives the war has imposed on them. Shushenya didn’t betray the other men, but when he refused to become an agent for the Nazis, he was freed while the others were hanged, ensuring that the entire community believes in his guilt. Voitik himself has been responsible through cowardice and incompetence for the deaths of others, yet he’s eager to be done with the execution of Shushenya. The chief irony of the film is that Shushenya is painfully burdened with his survival, longing for the release of death, but circumstances repeatedly ensure that he lives while those around him die. War has turned all human feeling upside down and life is more painful than death. In the Fog is a bleak film, but Loznitsa’s directorial assurance and the superb, haunted performances prevent it from sliding into the kind of self-serious pretension that plagues Cooper’s movie. 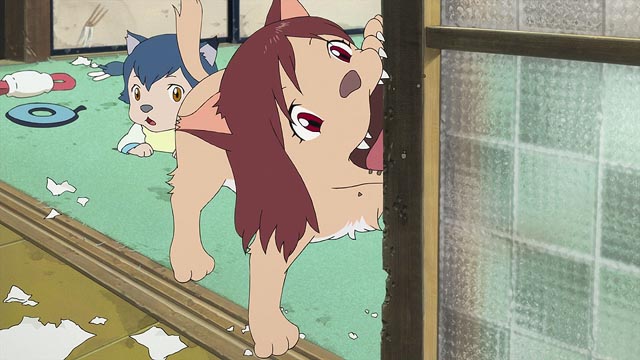 Mamoru Hosoda’s anime Wolf Children (2012) also didn’t get a theatrical release in this area, but is well-worth catching on disk. Very few Japanese animation features, other than Studio Ghibli productions, particularly those of Miyazaki Hayao, get North American theatrical releases; but one of the advantages of coming to these movies on disk is that you can see them with the original Japanese soundtracks rather than re-dubbed with American voices. Wolf Children begins without much to distinguish it; the early scenes seem fairly simply drawn and the story is a little bland – Hana, a university student, becomes attracted to a moody young man, who early in their relationship reveals that he’s actually a wolf in human form and can switch back and forth at will. This is not the werewolf we know, but rather one of those animal spirits which populate Japanese folklore. Soon after Hana has two children, the wolfman dies and she’s left alone with a real problem: her exuberant son and daughter are prone to sprouting ears and fur and scampering about on all fours. So Hana takes them to live in a remote country house where they’re less likely to be seen. This is where the film becomes rich in character and theme. As Hana struggles to be a good mother, her children must come to terms with their own natures and with the social world around them, finding a balance between the wild and tame with which they can live comfortably in their own skins. Full of humour, pathos, fear and longing, Wolf Children takes on satisfying depth (accompanied by artwork as evocative of rural Japan as that of a Miyazaki film) as a depiction of the fears and pleasures of parenthood as Hana watches her children grow into maturity and independence, finally making their own choices about how to live their lives.