Procrastinating over several reviews I should be writing, I sat down to watch a cheap exploitation double bill last night: Wes Craven’s The Hills Have Eyes: Part 2 (1985) and Alan Birkinshaw’s Killer’s Moon (1978), both recently issued on Blu-Ray by Kino Lorber.

Hills is Craven’s belated sequel to one of his best films, but it manages to miss pretty much everything that made the original so good. In that 1977 movie, Craven pitted a wholesome middle class family, stranded by a car accident in the desert, against another family – cannibal mutants living on the fringe of a nuclear testing ground. The two families are locked in a struggle for survival, but the members of the “good” family must find their inner savage to save themselves from becoming the others’ food. It’s a harsh film, with some genuinely disturbing moments.

The sequel is obviously a perfunctory attempt to cash in on the original’s notoriety. A bus-load of dirt-bikers and their girlfriends, heading into the desert to take part in a race, get off the main road and end up stranded at what appears to be a deserted old mine. They bicker and argue, have sex, joke around … and ignore all the warnings that the place is dangerous. Among them is Cass (Tamara Stafford), a blind girl with some kind of psychic “instincts”, who keeps sensing danger. But more importantly, there’s Rachel, who turns out to really be Ruby (Janus Blythe), the daughter of the cannibal clan, who managed to escape at the end of the original film with the other family’s son, Bobby (Robert Houston), who is still plagued by memories of the events from eight years ago and has refused to go on the trip.

This time there’s no family opposing the kids, just Pluto (the remarkable Michael Berryman), who magically survived his apparent death in the original, and The Reaper (John Bloom), the murderous brother of Papa Jupe, the old family head.

Stripped of the original film’s thematic concerns, the sequel is a routine slasher almost indistinguishable from the crowd which clogged theatres and video shelves back in the ’80s. 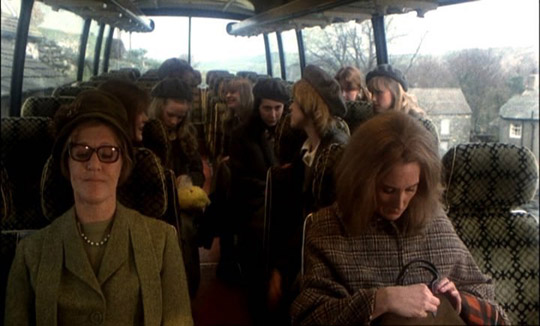 Alan Birkinshaw’s Killer’s Moon is a British effort which lacks Craven’s basic efficiency, but offers a potentially more interesting concept. Four psychos, who have been undergoing an experimental drug therapy in which they are supposed to be immersed in their dreams and there act out their worst impulses in order to exhaust and eliminate their violent tendencies, escape from hospital. The problem is they all still believe they’re in their drug-induced dreams and licensed to act out every impulse. 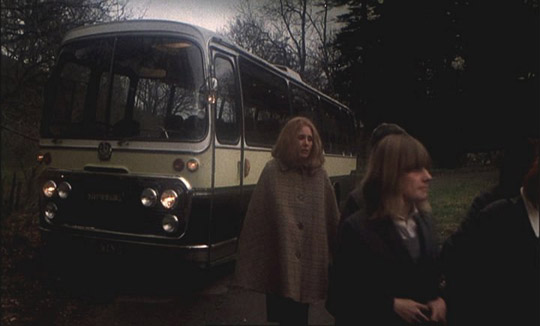 Cue the busload of schoolgirls on their way to a choir performance. Naturally the bus breaks down (in the picturesque Lake District in England’s Midlands) and the girls and their two teacher-chaperones have to find their way to a big hotel, not yet open for the season, where they take shelter for the night. The psychos, dressed in hospital whites which seem intentionally to evoke memories of Alex and his droogs from A Clockwork Orange, show up to rape and murder the girls while endlessly discussing the existential intricacies of acting out what they believe to be a mutual dream. 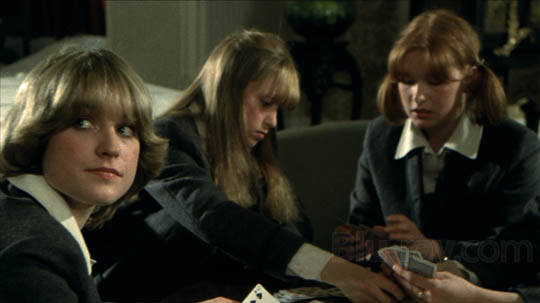 This was the second feature in what appears to have been a fairly undistinguished career, although Birkinshaw did go on to work with some fairly prominent actors – Stuart Whitman, Edmund Purdom, Oliver Reed, Donald Pleasance, Brenda Vaccaro, Herbert Lom. He made three movies in 1989, two of which starred Frank Stallone, Sylvester’s less successful younger brother, and he seems to have spent a lot of time making commercials and working on German TV productions. 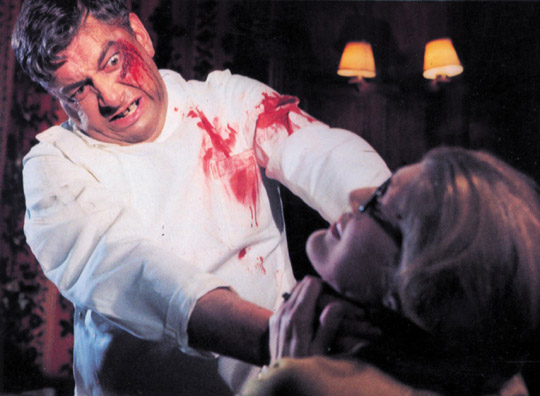 Despite Birkinshaw’s Killer’s Moon script having received a dialogue polish from his sister, the feminist literary novelist Fay Weldon (as Wikipedia says, she “typically portrays contemporary women who find themselves trapped in oppressive situations caused by the patriarchal structure of British society”), the film has no deeper ambitions as satire or social commentary; it’s merely a modest attempt to make a bit of money with straightforward exploitation tropes.

But for me personally, there was one startling moment. When Bert the gamekeeper takes off his hat and reveals a thick head of silver hair, I suddenly recognized Charlie Stewart, the Scottish actor I rented a room from in north London in the summer of 1975 while I was working at Foyle’s, the famous bookstore in Charing Cross Road. Small world!

Oh, and I did manage to get one of those reviews done after all: it’s already up over at Blogcritics.