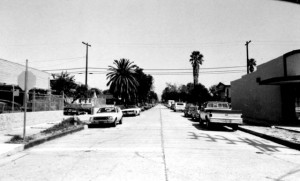 Yesterday, we had a brief chat with Armstrong – he came in, red of face (wind burn from skiing) saying, as we’d anticipated, “I thought you guys were in Mexico!”  So we explained the equipment question, the lack of information from Mexico City, our unease.  He put a call through to Raffaella – she wasn’t available.  And scheduled lunch in the Universal commissary with Paul Carey (of Shoreline) and the owner of a company called Bexel, who’s renting us the rest of the equipment.

Luckily, Armstrong was delayed and we managed to talk to the two of them and clarify things a bit.

Although it got down to gossip and such when Armstrong arrived (and ideas like live satellite links to transmit what’s happening on the set to distributors all over the world for promotional value), some other things became a bit clearer.  Such as: we have no connection whatever with Westgate.  That was just an informational meeting.  The material will be stored at Universal.  And we’re not getting the tape for free – Armstrong is paying for it.  So we might not get the ten gross (four-hundred-eighty hours worth) after all – which means the demand for two-hours per day might be eased.

Afterwards Anatol and I went over to Bexel to check the list again.  The package will be ready tomorrow (supposedly) and we’re to go over and look at it.  Our departure is delayed until Thursday now – so we should arrive in Mexico City on Easter Monday, exactly one week late.  It’s a pity; shooting is supposed to start tomorrow – but, according to Fred, it’s small stuff – and it’ll only be for three days – there’s the long Easter weekend.

I’ll be taking a small recorder so we can at least get a little background material before the camera arrives.

We are going as tourists – they’re supposed to arrange work permits after we get there.  As for pay – we have to speak to the production manager and the accountant when we get there.  We may be getting an apartment(s) – neither of us wants to stay in a hotel.  The per diem is twenty-four-thousand pesos a week (just under two-hundred dollars a week).

In the evening we went to see Missing.  It hit Anatol quite hard (he hadn’t seen it before); he’s from Poland, so the situation was close to home.  And when we came out he was in a strange mood – depressed, a bit aggressive.  He said he wondered why he’d ever taken out U.S. citizenship – the country could slip into fascism at any time.

We’re talking about a movie set in Europe – a cinema verite black comedy about chaotic terrorism and political decay.  With David as an artist on the brink of success in Paris and Sissy Spacek as a naive, middle-class American who becomes involved in complexities she doesn’t understand.  Anatol said he’d like her – but she’s so big … so I said, she’s married to David’s brother-in-law, why not just ask.  It was like a revelation to him….

Today was virtually wasted.  New tires for the jeep, some spare parts.  Desert shoes for me; a jacket for Anatol.  A lot of driving around, getting almost nowhere.

We came back here, found the locks on our doors had been changed (“ongoing security measures”) – and went for drinks and a big supper (the best we’ve had here so far – Anatol had lobster tails, I had duck).  Wine, brandy ….

We, my friend, are going to be some kind of celebrities.  We went over to Bexel, the rental facility, this afternoon.  And took a look at most of the equipment.  We’ve got the optimal package – almost too much – what a crew would ideally want, but generally couldn’t afford.  We don’t have to settle for second best.  It’s a fucking bonanza, Christmas in March – worth about a hundred-thousand.  Everyone down there will want to take a look.  Of course, there may be a few jealousies too.

Tomorrow I pick up the audio recorder, a Sony – the smallest professional stereo recorder (complete with two VU meters and Dolby) – and a modular Sennheiser microphone set – almost fifteen-hundred bucks worth all together and absolutely gorgeous.

Also, I’m going to buy an auto-winder for my Nikon – I bought a pile of film today (ten rolls of Tri-X, five of Plus-X, ten of a brand new format – 1000 ASA colour print stock).

Armstrong called Anatol this morning – rambling.  Has these ideas about a series of video “texts” on film-making – four hour-long programs….  Seems that perhaps he now thinks we’re capable, not just friends of the director who wangled a cushy job.  Maybe we’ll get another six months or a year out of it – amazing job prospects for this business.  But I really don’t want to live here (the smog’s been rolling in lately) – particularly after six months of Mexico City’s pollution.