Anatol ran into Jack with Fred Sunday evening, told him I was down here.  Monday, I introduced myself to him in the office – he didn’t make the connection at first.  He hadn’t read the article (I lent him a copy Monday evening – yesterday he said he’d started reading it and liked it so far). 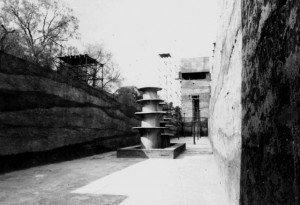 We were testing our wireless mic Monday morning when Cristina Monterubio came upstairs and said David wanted to see us on set.  That’s never happened before – so of course I got paranoid about it.  When we got there, he was talking to Jack – he asked us to show him over the production.  So we wound up giving Jack a guided tour of the stages, the backlot, and – after lunch – Aguilas Rojas.  He was impressed – and for us it was great, since we’ve become so used to it all, to see it again with fresh eyes.

We didn’t shoot anything that day and left the studio early.  I wrote for a couple of hours (the Paris outline), then called Jack to invite him to supper.  I went up to his room at the Century (the single most obnoxious hotel I’ve encountered – for some reason all the rooms are round, with round beds and round baths).  He’d told us earlier he was on the wagon, but he had several beers at lunch – and when I got there he’d already had quite a bit of booze.  He continued to drink at supper and afterwards, back in his room.  After two dry years, he’s suddenly hitting it again, hard.

He’s very intense, often elliptical.  I find his conversation hard to follow at times – and his soft voice doesn’t help.  He was quite passionate about Mexico and the state it’s been driven into.  When I left, he was quite pissed. 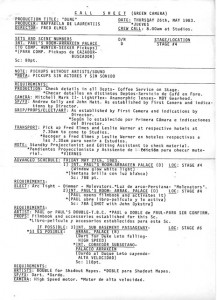 As I was wasting away by myself Sunday evening, Anatol was at Raffaella’s with John Dykstra and Marty.  From there, they went to La Pergola, where he got drunk.  He said she was impressed to see me working Sunday afternoon on my script – and he told her I was the best writer he’s met in ten years (he keeps telling people that).  So he started talking again of trying to get her to back our project.

By the way, she approves of Pablo, and gave the okay for Arturo to work with us.

Tuesday we shot another flying test with Ken McMillan – on a different set with a different kind of rig.  We met Sting, who seemed quite friendly.  Asked him for an interview – he seemed agreeable.  But subsequently he’s been avoiding it.  So I’m not going to push it.  As a pop star, he really doesn’t impress me.

Tuesday afternoon at Azteca Stadium was boring.  A lot of soldiers running around – but the shots weren’t much.  We were bothered a couple of times by the army liaison, an old guy (once with Pepe Lopez, once with Anuar Badin).  Pablo pointed out later that he was fishing for a bribe – we ignored him.

We were joined in the evening by Marie, the Swedish-American redhead Anatol is after.  She’s really quite nice and seems interested in our project and future plans.

At supper, to our surprise, we were joined by Tony Masters.  He’s been called in connection with 2010: Odyssey Two – it seems that Fox has got it (they wanted Spielberg to direct).  And they asked Tony if he still had the original drawings from Kubrick’s film – and maybe the models too.  Pretty tacky.

We left the stadium about nine-thirty, the studio around ten.  We went to Pablo’s place – a very nice, spacious townhouse sort of thing.  Marie, who lives next door, joined us.  We talked and drank wine until sometime after two.  A very pleasant time – it helped make this fucking city seem a little more human. 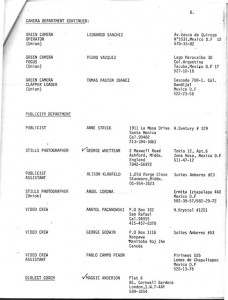 Yesterday morning, when we got in, Strick told us she wanted to shoot a group of Atari video game people having lunch.  I ask you….  We didn’t, due to a lack of light and the sound of rain on the roof.  But it’s getting to the point where she seems to think we’re here to record the doings of the publicity department.  (She even had the gall to call us “her crew”.)

Leonard Morpurgo brought some more stuff down for us from Bexel.  The idiots, instead of sending the sponges for the shotgun, sent us a new shotgun plus zeppelin – two, we don’t need.  And the wide-angle lens which has been sitting there for a month waiting to be sent, was wrongly wired, so it doesn’t work on our camera – and they didn’t send a manual with it, so it’ll be difficult for Arturo to re-wire it.

And today Morpurgo came over at lunch and told us that Armstrong is sending down a script.  Now, the communication might be garbled – but it sounded as if it’s for the sixty-minute documentary.  If so, what the fuck am I doing here?  And how can you write a documentary script before you’ve collected the documentary material?

There may be a screening of Eraserhead tomorrow evening at the studio.

Jack told us at supper last night (at La Pergola, with Pablo) that David was invited to Moscow to screen Elephant Man a couple of years ago.  He went to Berlin, visited the Wall, climbed up for a view – saw a soldier looking back, a signal – and is convinced he was hit with microwave radiation, that it’s still working inside him.  He left quickly and refused to go to Russia.

While having breakfast at the studio yesterday morning, Catherine Coulson walked into the comedor with a friend – an attractive woman in her thirties, Jenny Sullivan.  She’s down here to have a look around – see if maybe there’s a niche she can squeeze into (ordinarily, she would have worked with Fred – but Raffaella wouldn’t allow him any Americans …).  It’ll probably never happen, but we’re going to see if it’s possible to get a second camera on our project (since they want us to do a ridiculous amount of work) – she’ll check Armstrong out when she goes back to L.A.  Perhaps.

Shot a bit of Dykstra yesterday.  And Gianetto de Rossi putting the makeup on Ken McMillan – a rather noxious, pustulant design.

In the evening, Eraserhead.  A rather disappointingly small audience – but enthusiastic.  It was the first film I’d seen in two months(!).  So my mind, having fasted, was clean and fresh – the film hit me all over again.  There are so many beautiful shots, so many extraordinary moments….

And to be able to walk up to David afterwards and shake his hand and say that I’d fallen in love with it all over again – I actually found myself choking up.

Strick was there, of course, putting in an appearance and saying how brilliant it all was.  Unfortunately, when she asked about something, David pointed at me and told her she should read my article.  She’s suddenly realized that something special is going on here and that I’m connected.  She wants me to make sure that she’s the first to get a copy when the people who are reading them now are finished.  Of course, I don’t want her to read it – she’ll ransack it for her own bloody purposes.  Besides which, more important people are already waiting (Nelson and John, Kyle, Catherine, Marie …).

We went back to Pablo’s for wine and cheese afterwards – with Marie, Eric and Geraldo (a friend of Pablo’s from L.A., down to install a computer for Marie’s boss).  Talked about this and that – and Eraserhead.  Both Anatol and I were all tensed up by it, so it took a while for us to settle into any conversation.

We’re hoping Eric (an amazingly sharp guy – his wit in English is so rapid-fire, it’s hard to believe it’s not his first language) can come up with a script to be shot here (on video) quite quickly and cheaply. 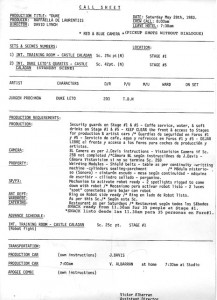 Didn’t do a thing all day – there’s no energy left by Saturday.  We just wandered around, talked to Catherine, poked about.  Saw the Baron’s first on-camera flight – it looked marvelous, but was in such a tight space we couldn’t do anything with it.

There are some parties tonight, but I don’t know if I’ll go – don’t really feel like it.

Penny Shaw, by the way – the assistant editor – is the daughter of Robert Shaw, by his first marriage.

She worked on Heaven’s Gate – lasted from beginning to end, unlike most people.

Learned today that David had to marry his first wife, Peggy, because their daughter was on the way – makes the origins of Eraserhead that much clearer.

Went to one of the parties – Cristina Espinoza’s birthday.  Turned out quite well.

Eric came up with a script idea, which we immediately liked when we heard it this morning – an absurdist piece revolving around a writer who is kidnapped by mistake by some inexperienced terrorists.  Suddenly at the party we spotted a woman who exactly fits the bill as the main female terrorist – a Mexican who speaks perfect English with a very English accent (having lived ten years in London) – who looks a little punk, a mix of glamour and sleaze.  Who’s a dancer and actress (worked last week in Michael Douglas’ Romancing the Stone).  Then met another woman who also turned out to be interested – whose husband is apparently a producer.  We’re supposed to meet at this woman’s house tomorrow at six to talk (we want to get hold of Eric tomorrow and have him join us).

It all sounds wild and improbable, but….

I mentioned it to Bob Bealmear and it turns out he has a friend in New York who buys stuff for cable – with world-wide connections….

Unfortunately, as the evening progressed, and Anatol smoked a bunch of grass, he sounded more and more like a bullshit artist with big empty plans which he was using to hit on women.  I got embarrassed and finally left.  I don’t like being associated with something which sounds phony.  Far out, improbable – okay.  But not phony.  The guy often drinks too much – and when he smokes dope he starts to look a bit of a fool.  After a good start to the evening, I wound up with my usual cynical disbelief – we’ll never put it together – and we’ll end up looking bad….