The job moves smoothly on.  Good words from Armstrong.  I’m on good terms with Paul Sammon who just came down for two days (it helped me to see just how much confidence I’ve gained).

But he brought down a new book (one of three) which contains a lengthy piece on Eraserhead.  Depressed me a bit.

I learned that Catherine brought down the first batch of pictures (half the total).  They’ll go off to CFQ as soon as the rest arrive.  David told me to keep on his case about it (we spoke on stage; I made a mock strangling motion and said, “David, you’re destroying my career” – Anatol, I’m afraid, caught it on tape).

Exhausted.  I only got a few hours sleep last night.

At lunch yesterday, Jack came in, took my hand across the table and couldn’t quite express what he felt.  He sat beside me, ignoring everyone else, and told me how moved he was by the article.  He’d finished it the previous night at one and had wanted to phone me.  So many times, he said, he had looked at David over those years and said, “They’ll never know.  They’ll never have any idea” – and along comes George Godwin and now they’ll know.  He said he had had to keep stopping because some little detail or other brought back a rush of memories and the tears flowed….

I’ve never had a response anything like it to my writing before – I started to get choked up.

So I called Jack in the evening when I got back here and we went to Pergola for supper.  And the memories flowed.  He talked about Herb Cardwell, regretting that no one had told me more about him….  He talked about his marriage to Catherine (a real knock-down, drag-out hitting match)….  He was enormously entertaining, acting out his stories.  I realized the source of his intensity and felt more comfortable with him than ever before – he’s incredibly sentimental, so much feeling that it spills over into everything….

After supper, he took me to a little place just up Amberes – a bar-cum-gallery which just opened last week.  There were two pictures he wanted to buy.  Already known to the owner and staff, he was warmly greeted – and introduced to the artist himself – a marvelous character named Oscar Rodriguez whose paintings are, to me, wonderful, gorgeous surreal pieces.

We also met another artist, Helen Bickham, an American who has lived here twenty years.  So with them and the inhabitants of the place, we had a lengthy session, much beer, lots of good conversation.  I said I’d try to arrange for the two artists to see what’s going on at Churubusco – and to get in next time Eraserhead is screened (I cleared it with David and Kuki today).

We lingered after the place was closed.  Then went on to Oscar’s place – a huge old apartment, every inch of which was loaded with stunning paintings and sculptures (his own and other people’s).  In the middle of a conversation I caught sight of a small painting which just grabbed me – I wanted it.  Not for sale, I was told – unless I could talk his wife out of it (a rather formidable New Englander).  I’ll have to see what I can do.

We stayed till nearly four, having a great time, talking and drinking mescal (from a plastic gallon jug, like anti-freeze; “here we pay for the mescal, not the bottle,” said Oscar). 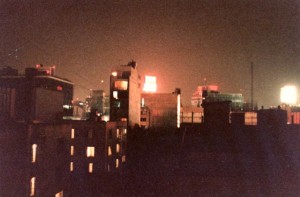 I can’t remember ever having such an evening.  It was great.

On the way home, Jack and I stopped for a bite at Denny’s.  We both fell in love with Oscar’s work, couldn’t stop talking about it.

I finally got to bed just after five.

We didn’t shoot today (thank god) because the tubes are scarred.  Had to try to clear them.  So I came back here this afternoon for a sleep.  The maid had stripped the bed, left her bucket and mop, and then obviously gone for a siesta.  I crashed, having bolted the door.  At one point I was woken by the phone – no doubt the desk wanting me to let the maid in.  I ignored it.  The mess will have to remain until tomorrow.

A letter from Jack, Kyle’s agent.  He’s really researched our situation, outlined the areas we should be concerned about.  Also looked into my position on the article – would be sticky if they won’t go along with renegotiating the terms, giving me the book rights (because it was a commissioned work).

He’s also sounding out U.S. and French contacts about the Paris film!!!  The guy’s amazingly active.  So of course Anatol’s immediate reaction is to distrust him.  For myself, I see no reason to.

Didn’t go to work today – sleeping off this damned cold.  Got up around two and wrote all afternoon – the bloody thing’s getting so complicated I keep forgetting who characters are.  But it’s kind of fun – I’ve never put so much effort into a plot before.  And I’m terrified that when it’s done, someone will look at it and find it simplistic – that the complexity is just in my head.

Went to the studio yesterday, but there was nothing going on.  No shooting.  Shut down to prepare for whatever’s to be done next.  It seems that they used Francesca’s accident (a stove blew up in her face giving her some minor burns) to take a breather for which the insurance company would pay.  Even though she wasn’t actually scheduled to shoot.

So we came back here, bought some bread, cheese, ham and beer and had a light lunch, listening to music (I’ve now chosen two songs for the Paris film’s soundtrack – Honeymoon Killers’ L’heure de la sortie and Kate Bush’s All the Love).

Called Jack.  He came over.  And we went off in search of a bar at about two.  Sat drinking in the Galeria Plaza all afternoon, stopped for some chicken and tacos up the road.  Visited Fred, planning to go on with him for the evening.  We split up to take care of various bits of business.  I passed out in my room.  Jack called at ten-thirty – he’d passed out too.  So I just went to bed.

A friend of Pablo and Eric’s, hired a couple of weeks ago to take stills on Dune, turns out to have a finished screenplay which sounds quite interesting – more sombre than Eric’s idea.  If it looks good, we might film it – giving Eric a lot more breathing space to develop his script, which (if finished) we might knock out in the week or two following the wrap on Dune in September.

Anatol annoyed me yesterday.  We passed El Corral, the little bar-cum-gallery, and stopped in.  He took a brief look.  And later dismissed Oscar out of hand as a talented amateur, but not a real painter.  When I said he’d hardly seen the guy’s work, he said he didn’t need to – one or two prints are enough to tell: the only good thing the guy does is the headless bodies.