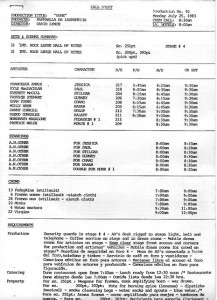 It’s possible we’ll be staying on here longer than expected.

We spoke with Raffaella this afternoon.  The idea is to cover the model and effects work on Dune after principal photography has been completed – and periodically cover the production of Conan at the same time (much of it on location) – occasionally hitting L.A. to check on the assembly of the Dune material.

We’ll call Armstrong tomorrow to put it to him (Raffaella said she’d also call him).  She seemed to accept the idea without a moment of doubt, as if it were the most natural thing.  With her, it seems, we’re firmly established.

I don’t want Anatol to know yet.

An awful evening.  No one to share the moment with.  It became very lonely and depressing.

Just finished William Burroughs’ Cities of the Red Night.  Couldn’t make head or tail of it.

I heard from Tony Masters that Raffaella wants Peter Weir to direct Tai-Pan.  With another producer, great – but with her, I hope he has other plans.

A good day, surprisingly.  Two interviews.  The second with Emilio Ruiz del Rio, who’s in charge of the live-action miniatures.  A fascinating, energetic, enthusiastic man whose work in itself is extremely interesting.  We’ll be doing more on him.  It was the first time we’d all been interested in ages – in fact, we’d all been feeling at the end of our tolerance for the job.  I’ve been depressed all week, Pablo’s having marital problems, and Anatol was ready to quit.

Met the guy who’s taken Dykstra’s place, doing the opticals.  Claims he does better work, of course.  Then proudly announces that he did “most of the de Laurentiis pictures of the last fifteen years” – such effects classics as Conan, King Kong, and Flash Gordon.  Also did Logan’s Run.  Now I’m really worried about the way Dune will turn out.

Apparently there’s about three hours of the film assembled so far.  With an expected first cut of five hours.  Universal wants a two-and-half hour maximum, Dino – I think – two hours.  It could become incoherent by the time it’s released.

Meanwhile, a number of people have voiced the fear that the film will be, quite simply, dull.

So – shortly after eight yesterday, I took a walk over to the Krystal.  No one there.  Around the block and back.  Still no one.  I called Anatol.  He and Marie were planning to go later – they’d pick me up.  I dozed off.  Phone woke me at nine-forty-five – Marie: They were on their way.  I went downstairs to wait.

About ten-fifteen, John Baker walked in – to call up to John Stirber’s suite and tell him that Anne would like his presence.  A group had met at the Krystal after all.  I waited until about ten-twenty-five, then walked over.  Had a quick drink – then five of us piled into a taxi and headed for the party – me, John Stirber, Andrew Kelley, Anne, and Anita.

The party – in a really obscure part of town, reached through winding little lanes barely more than alleys – turned out to be quite small and pleasant.  Drank quite a bit, talked to various people.  I had a little chat with a woman called Valerie who’s in love with Malcolm – then went to sleep on a wooden bench in the living room.

I got a ride back here shortly after seven with Trevor.

The reason Anatol and Marie didn’t show up yesterday evening was that at ten o’clock Anatol’s jeep was totaled.  They were lucky not to be killed.  A car barreled through a red light, hit the jeep dead centre and sent it spinning three times, into another car, then into a fence.

No one was seriously hurt – shaken up, whiplash.  Damned good thing they hadn’t picked me up yet – I’d’ve been rattling around loose in the back.

Didn’t stay long at the studio.  Got some releases signed – I’m embarrassed to present the fucking things to people.  Some are a little hostile about them.

Then picked up the IBM typewriter I’ve just rented, came back here, started on the script, took a nap, went out for supper, typed some more.  Got a third of the script done already.  Unbelievably wonderful feeling having a typewriter again – a very good one too.

The studio was shut down today – shooting had been completed on two stages, so they decided to let people go for the weekend.  I found that out after I got there. 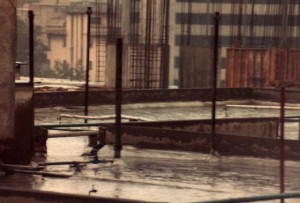 A long, arduous day, nonetheless.  I typed out the whole script – it comes to a total of ninety-eight pages – and looks vastly better for being typed.  It is without question the best script I’ve written (but is that saying very much, really?).

Pablo tells me Anatol is dying to read it.  Suppose I can’t really delay.  I’ll run off some copies on Monday – send one to Jack Leustig in L.A. – see if anything happens.  Certainly, for all his talk Anatol hasn’t got the faintest idea where to look for money.

Just spoke to Tim – still in Vancouver – still waiting for his passport.  Ready to come down at a moment’s notice.

Proofed the script this morning, retyped where necessary.  I’ll run off a few copies tomorrow.

The glow I felt yesterday has worn off, of course – that feeling you get looking at a freshly completed manuscript – a sort of loving warmth, like a mother with a new baby.  The inevitable detachment is already setting in – once the thing is finished and sent on its way, I seldom feel any sense of personal connection – the process of writing becomes forgotten and the end product is just an object somewhere outside.

I’m approaching the stage where I think it’s a complete piece of rubbish which would be embarrassing to show anyone.