Just spoke to Tim – he’s coming down here next month.

My desire to keep this journal has all but fizzled.

Armstrong is obviously going to fuck us – no intention of talking – just take our material and do what he wants with it – no guarantees.  I feel no sense of obligation to him or to Universal.

Big party Wednesday night at Dykstra’s – very good time.  I lingered on into the early hours.

I stayed home Thursday – slept until one, then wrote.  Going quite well.

Supper with Jack – heard from him of a party – a farewell thrown by Sting on the roof of the Royal.  A real bash with endless quantities of champagne.  Sting’s actually a nice guy, intelligent and friendly – if moody.  I’ll be able to read his Gormenghast script (Steerpike’s story, of course) after a couple of other people are through with it here.

Jack got very drunk – went on to the club on Insurgentes.  He got so loud and obnoxious, seeming to threaten violence, that I finally got up and left him there (with Malcolm, from props).  It’s too hard to watch – he seems hell-bent on destroying himself.  And of course there’s nothing I can do about it.

Anatol is getting thoroughly nauseating about Marie – it’s embarrassing to watch (and I see Marie not being terribly pleased with some of his more effusive expressions of affection).  He almost got into a drunken fight at the end of Sting’s party with one of the stuntmen who was pursuing her.

I find his mannerisms – vocal and physical – almost impossible to bear these days.

Saturday, didn’t do anything.  Anatol decided to go visit Marie and simply never showed up at the studio. 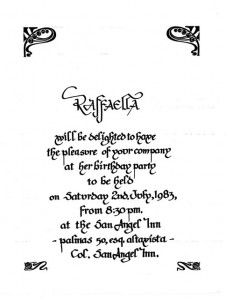 That evening there was the big party – Raffaella’s birthday do at the San Angel Inn – a beautiful old hacienda, huge.  Ate supper with Jose Ferrer and his wife, Patrick Stewart, and Jack.  Then after the meal, went on to another party – another birthday (Ellie, from special effects).  A good one.  Met some production people from Sadat (including Andrew McLaglen’s son).  Jack got obnoxiously drunk again.

Jack is really bad now.  Saturday, at the studio, he was talking about “taking the cure” – going to a place in Texas which uses aversion therapy (sick-making drugs).  Saturday evening, he got vile again. 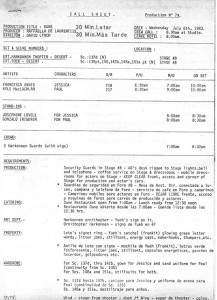 I ran into him at the studio early Monday afternoon – he looked shaky, on his way to the Mexican restaurant to drink (he constantly “needs” a drink now).  Yesterday, Cuauhtemoc was talking to me about how worried he is about Jack – but neither of us could think of anything to do – Jack gets hostile if you start talking about his drinking.  I’m afraid I’m at the stage where I’m avoiding him – I don’t want to go out and watch him get drunk – particularly now that he’s blacking out and bordering on violence.

Maybe I should have a word with David – it’s quite possible that he’s not aware of the situation, that the “favour” of keeping Jack down here indefinitely is wrecking the guy.

Monday, I went for a lonely supper at La Pergola.  Ran into Patrick there.  A while later, Kyle came in with Sian Phillips, Linda Hunt, and Everett.  Kyle asked me to join them – I did, after I’d finished eating.  Ken McMillan came in a bit later, then Molly and Virginia, and finally Ed George.  We were there till about midnight.  Except for poor service and Ken’s loud New York manner, it was fun.

We walked back in the rain.

Spent quite a bit of time with Jack yesterday.  We didn’t shoot anything, and I left the studio at four with Jack (we’d all had lunch together).  He seems quite serious still about the Herbert Noble story.

I helped him move from the Geneve to the Krystal, had a couple of drinks in the bar there with him and Anatol.  Then the two of us had supper in the restaurant there.  He was drinking quite a lot, but not getting unpleasantly drunk (apparently he hit Ellie’s husband at the party Saturday night – or so he says).

Flying off to Zihuatenejo this evening for the weekend – a crew charter, forty or more Dune people.  It’ll be a problem keeping away from them all for two days, but I’ll give it a try.  I need a complete break. 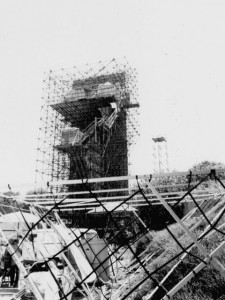 The Fremen Great Hall from behind

First unit shut down yesterday for the rest of the week – Kyle walked off, as he said he would if he didn’t have a signed contract by Wednesday.  Jack puts it down to his being a spoiled brat – apparently it’s not that unusual for someone to go through a whole movie without anything being signed; what’s unusual here, of course, is that no one trusts de Laurentiis – he’s exhibited no signs of good faith (omitting important clauses when the terms get written down, as with Patrick Stewart; simply forgetting important parts of the original agreement, as with Dykstra); why should anyone trust him?  But it’s true that the ones who are complaining most are the ones who have never made a movie before and have no experience of the way the business is conducted.