I’m not entirely clear on the psychology of binge-viewing. It’s a relatively recent phenomenon, arising from a combination of factors – most importantly the rise of long-form storytelling (on television, but also in movie franchises) and the access provided by, first, home video, on tape and then disk, and now the explosion of streaming services. I can’t speak for others, but for myself I’ve noticed that binging diminishes the importance of flaws and weaknesses in any particular series – I’m more tolerant of irritating characters and unsatisfactory story developments when I can just keep immediately plowing on through subsequent episodes. The satisfactions of binging seem less a function of detail, of the micro-elements of storytelling, and more about the macro. It’s about being immersed in a narrative world almost regardless of what’s going on there. The closest analogy I can think of is travel. Your experience of a place is very different depending on whether you just drop in briefly as a tourist or you stay and live there for a while. Spending six days in Beijing a few years ago, I took in a handful of major sights – the Forbidden City, the Great Wall – but I wasn’t there long enough to get a sense of what life is actually like in the city; however, when I lived in Hong Kong for eight months almost forty years ago, I was able to internalize a kind of subjective, psychological map which connected various locations which took on emotional meanings for me. Beijing was an almost overwhelming stream of strange sensations, but Hong Kong became an organic place.

I mention this because my friend Steve insists that I have to confess to recently binging all five of Michael Bay’s Transformers movies (2007-17), plus Travis Knight’s Bumblebee (2018), in two days. This is not easy to explain, because I’d previously only seen two of them (numbers one and three) in a theatre and, at the time, thought they were irritating crap. This despite the fact that I don’t have a hugely negative opinion of Bay. Yes, he has crass tendencies and editorial ADHD, a predilection for glossy advertising-style visuals to signal rather than dramatically evoke obvious emotions. His editing, aiming to ramp up excitement, continually risks rendering action incomprehensible. And yet I enjoy and occasionally re-watch a number of his movies – The Rock (1996), Armageddon (1998), The Island (2005), Pain & Gain (2013, by far his best movie), 13 Hours (2016). But I don’t like the Bad Boys movies, Pearl Harbor (2001) is an overblown embarrassment, and I didn’t like what I’d seen of Transformers.

Oh yes, they are very big

Yet on one of my first expeditions out into the world following my surgery, I stopped in at a used music and movie store to trade in a few DVDs I’d replaced with Blu-rays and found a new six-disk box set of the series. I was in a mood to buy something and it didn’t cost much with the trade in, so it seemed like a bargain … an impression which totally overruled my antipathy towards the Transformers franchise. (I did the same thing last year with a set of the first five Mission: Impossible movies, which I didn’t have much interest in individually, not to mention the four-disk Predator collection and the five movie Underworld and Jason Bourne sets.)

Watching almost fifteen hours of giant robot mayhem in two days, I was irritated by the same things which had irritated me in the theatre – most particularly the lame “comedy”, like the Transformers trying to hide in the family backyard in the first movie – but on a smaller screen the overdone CG action seemed less migraine-inducing and it turned out that there is a large narrative arc (not always coherent) that runs through Bay’s five movies. While not in a class with Guillermo Del Toro’s Pacific Rim (2013), it’s a pulp epic no dumber than Star Wars and, when not spread out intermittently over a decade, is an entertaining world to visit for a couple of days. 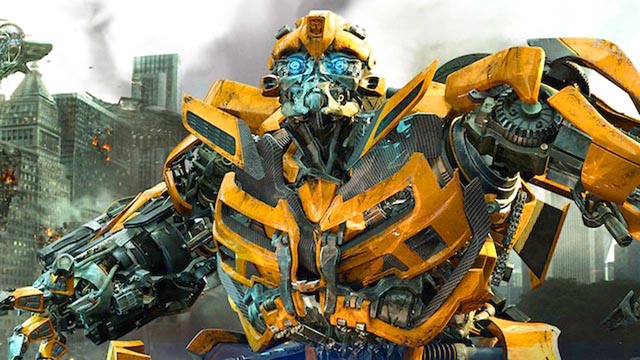 Knight’s Bumblebee is a footnote aimed at kids which lacks the pulp grandeur of the main series and tends towards cute and sentimental with its story of an unhappy teenage girl and the love of a robot who helps her get over her grief about her father’s death, more or less incidentally saving the world in the process. It leans even more on the comedy which runs through the previous movies, reducing the narrative stakes. It feels like a creative step back – though no doubt a smart commercial move – for the director of Kubo and the Two Strings (2016).