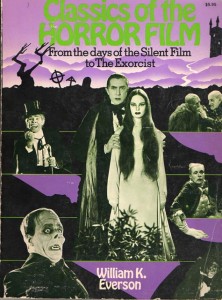 The recent guest post here about William K. Everson by my friend Howard Curle reminded me that I have a copy of Everson’s Classics of the Horror Film (Citadel Press: Secaucus, N.J., 1974), which I hadn’t looked at … well, probably in a couple of decades. Dipping into it and re-reading some of the chapters, I was surprised at how good it is … the clean prose, the short insightful, incisive essays reflecting a passion for film untainted by snobbery or fear of ridicule (he even finds the Halperins’ White Zombie in some ways superior to Tourneur’s I Walked With A Zombie). Without intending to, I found myself re-reading about half the book over the next few days. 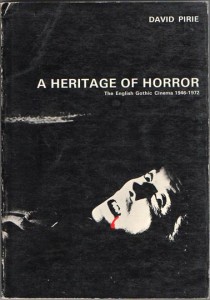 I was reminded of the atmosphere in which my own interest in film developed — before writing about movies was irrevocably altered by the rise of academic film studies, when there was a lot of serious popular writing by people like Everson, John Baxter, Robin Wood, David Pirie and others; before writing about film split into two seemingly exclusive camps — writing about the entertainment business and industry personalities on one side, and often impenetrable academic theorizing on the other (I got into the latter for several years in the ’80s, mostly feminist-psychoanalytic texts by people like Mary Anne Doan, Kaja Silverman, Teresa de Lauretis — books I really don’t think I could get through now; you can sample the effect this reading had on me here). 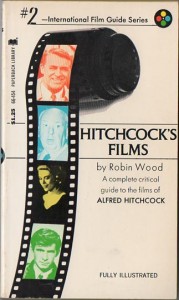 What I also realized was that back then in the ’60s and early ’70s, in a pre-home video, pre-Internet environment, reading was crucial – often reading about movies I had never seen, and in many cases was unlikely ever to see. Apart from catching the latest releases at one of the two or three accessible theatres where I lived, there was only what showed up on the late show or Sunday matinees on the two local broadcast channels. The universe of film had to be accessed mostly indirectly through books, and I accumulated many of them in those years.

There were handy survey titles, like Citadel’s books on genres, stars and directors, like Paperback Library’s International Film Guide Series of pocketbooks, David Pirie’s studies of British horror films (a revised edition of which was published a few years ago) and the vampire genre, and so on. 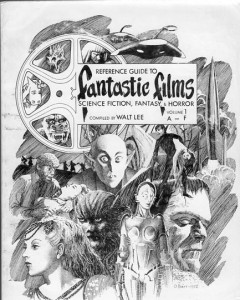 There were also interesting oddities like Walt Lee’s obsessive labour of love, the Reference Guide to Fantastic Films in three volumes self-published by Lee between 1972 and 1974. I bought my copy directly from the author by mail and used to browse through its fine print listings of all the titles he had 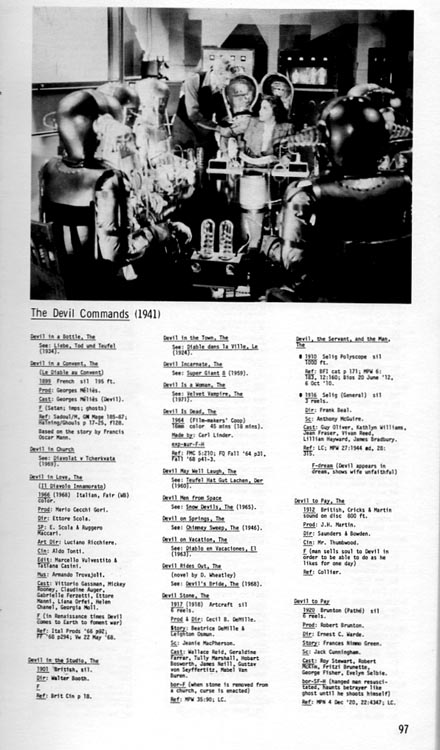 managed to dig up, some with barely any attendant information, others with cast and crew lists, and all with brief tags indicating what their fantastic content was. Few people today could possibly understand the monumental task Lee had set himself in creating what was essentially a hard copy database of genre films from the 1890s to the (then) present.

I also have a copy of the massive 1243-page New York Times Directory of the Film from 1971. This is basically a big fat index of every film-related name mentioned in the Times up to that date – writers, directors, producers, stars – along with reprints of all the reviews of movies included in the Times‘ own year’s best lists, and awards winners from the New York Film Critics Circle and the Oscars. 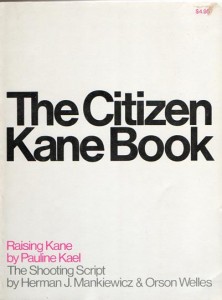 I read about horror films, science fiction, gangsters, noir, westerns … I read about great directors, minor directors … for years, my view of Orson Welles was based on Pauline Kael’s “Raising Kane” in the Citizen Kane Book (Atlantic Monthly Press: Boston, 1971), that he was a self-aggrandizing egotist who managed to squander his prodigious talent while refusing to give credit to the work of others. It was much later, as I saw more of his work and read people like Jonathan Rosenbaum and Peter Bogdanovich on Welles, that I realized how distorted Kael’s view was, and that her opinion was rooted in the myth that he was a failure because he “couldn’t make it in Hollywood”; but of course, Welles wasn’t a failure. He had a long career of making remarkable films under very difficult circumstances – difficult because he refused to submit to the Hollywood system. 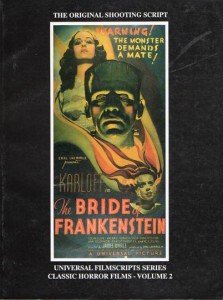 The chief value of the Kane book now lies in the inclusion of the original Citizen Kane script. Which was one of many I read over the years, scripts being one of the primary substitutes for viewing inaccessible films. I must have seen many movies in my head before I ever managed to get an opportunity to see them on a screen. I collected scripts voraciously and even in the late ’80s was happy to come across something like the MagicImage Filmbooks series of classic Universal filmscripts, edited by Philip J. Riley, with introductions and contextual materials provided by Gregory Mank and Robert Skotak. 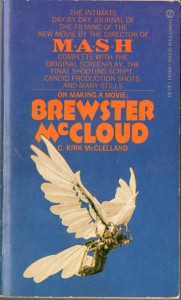 Things found their way into print back then that it’s hard to imagine seeing today. C. Kirk McClelland’s On Makinga Movie: Brewster McCloud (Signet: New York, 1971), for instance. This account of the production of Robert Altman’s first post-M*A*S*H movie was a real education for me, with its reproduction of Doran William Cannon’s original script, the vastly altered shooting script, and McClelland’s frank and illuminating account of Altman at work; it was a lesson to me in just how much accident plays a part in the creative process (something the more tightly controlled industry today tries to eliminate, with predictable results in the loss of originality, surprise, quirkiness … all those things which make even a flawed movie worth watching).

In fact, I particularly liked to read accounts of the making of favourite movies, like Orville Goldner and George E. Turner’s The Making of King Kong (Ballantine Books: New York, 1975), which set a standard for similar accounts in magazines like Cinefantastique and American Cinematographer. 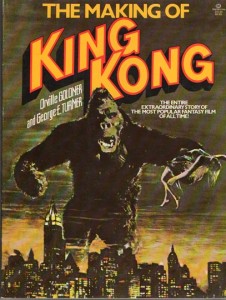 I built a library of books from the ’60s through the ’80s which allowed me to cross-reference, to flesh out information and opinions from numerous different sources. These books provided the ground from which I eventually built my own opinions, sometimes in accordance with what I read, sometimes against it. For years, one of my favourite books was Bill Warren’s monumental 2-volume account of ’50s SF movies, Keep Watching the Skies (McFarland & Company: North Carolina, 1982-86). I still enjoy Warren’s writing, but in dipping into the new, revised edition (1910) recently after having seen many more of the movies he writes about, I find myself more actively questioning or disagreeing with his opinions (since the original edition, for instance, Arch Oboler’s Five has been released on DVD and it turns out to be much better than Warren’s opinion of it, but he hasn’t revised his negative evaluation for the new edition). 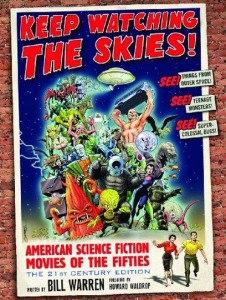 Over the past ten or fifteen years, I’ve probably read much less about film as I watch more movies, and I’m afraid I now turn to the Internet more frequently than to books to look things up. But with that shift, I think I’ve actually lost something, a more active sense of dialogue with other people who share my passion; scanning web pages doesn’t involve the same kind of engagement as reading a carefully written, considered piece of history or criticism between covers.

I think what really surprised me in picking up Everson’s book on horror films was the realization that what I’ve been trying to do with this blog is quite similar to what he did in that book – to speak plainly and passionately about what he loved most, the movies which gave him so much pleasure, and hopefully to inspire others to take a look and share in that pleasure.

Alien sex and the comedy of self-destruction: two documentaries